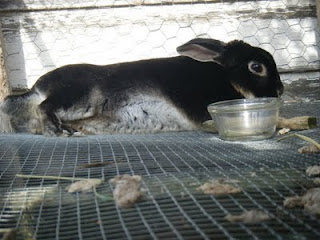 Well my bunny Tuxedo, Tux, as we called him for short, died today. This picture was the last taken of him, in early Spring Tux was enjoying the warm weather and sun. He was born June 24th 2007.

I got Tux several years ago for the purpose of showing him at fairs. He was the best overall in his litter but I never had the chance to show him, which is too bad because I'm sure he would have won something at some point. Tux was named after his black and white pattern, he was a black otter mini rex rabbit, and his father, "Hershey," was a champion winning a Best of Show.

Although I never showed Tux, it didn't matter, he was a good bunny. He loved carrots and he loved apples. In the spring time he couldn't wait for that first blade of new grass, which he also loved to much on. The little neighbor boy would come over to see him and give him treats. He also loved to chew on apple wood that I would give to him from our apple tree. But he loved his rabbit pellets the most, and only his certain brand, otherwise he would turn up his nose to it.

Tux loved the cold weather and snow. Anytime it snowed he would be out on the little "deck" I made for him outside his hutch. He would lay there and watch it snow and he would lick up the snow as it gathered in his pen. If you caught him enjoying the first snow fall of the season, you would get to see him hopping around his pen in excitement.

One night in the early fall time I came into the kitchen at 2a.m. Usually I would turn on the kitchen light, but for some strange reason I left it off and walked towards the window that looks out into our backyard and where you can see Tux's pen. I saw a dark figure in the yard and thought it was a neighbor dog, but as I looked closer I saw it was a deer. I never saw a deer that close to our house before. It was a doe with her baby and they were eating apples off the ground. I could see Tux running back and forth in his pen, standing on his hide legs and putting his front paws on the wire sides. (This is what he would do when I or anyone else would come to see him or feed him.) He thought the deer were his friends. And they, not being one bit scared of him, enjoyed a few apples before moving on.

Tux was by far the softest bunny I had ever felt. His fur was like velvet, he was a mini rex and that's what the rex's are known for, their extremely soft fur. It's what made me want a rex in the first place. He would let you pet him as he ate and I would play with his ears and scold him for all his tick marks, (the random white hairs outside his pattern, the only negative thing he had for a show rabbit).

Tux will be missed, and not just by me. The woman I bought Tux from was a major breeder and shower of rabbits. She too died earlier in a car accident. I used to send her random emails every year with pictures of Tux, I'm sure she appreciated it. Rabbits make wonderful pets, they are small, quiet, affectionate, and easy to care for. As far as rabbits go, Tux was the best. Tuxedo, 6/24/07 - 8/17/11