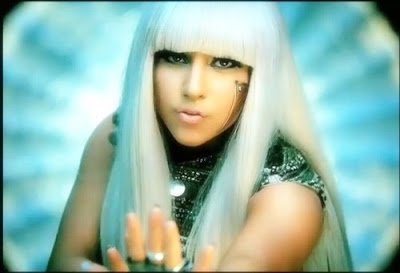 A few weeks ago i heard someone on tv say, "Lady Gaga." I said, what the hell is a Lady Gaga? Then i forgot about it. In the next 5 days i heard about this Lady Gaga person about 10 times which got me thinking, seriously...who is THIS??

I even mentioned it to my friend, saying i heard the term Lady Gaga and now have heard about her so much but i don't know who she is or what she does. He said it was the same for him. So who is this new singer that is taking the country and world by storm? I decided to find out for myself.

I looked up pictures of this Lady Gaga first because i didn't even know what she looked like, let alone what songs she sang. She is a very innovative dresser, very odd at times, not just in her videos, but in real life as well. Her makeup can be extreme and her hair often looks fake. Its easy to see why she is popular. She obviously doesn't get dragged into trends, rather creates them.

I watched a minute or two of 4 of her videos one right after the other and although most sounded the same, (which is just her style) they were all pretty good. Very catchy and dance club-esque. I assume that is where her popularity started and spread to the average listener. I found out she was first a writer for musicians such as, Fergie, The Pussycat Dolls, Britney Spears, and New Kids on the Block. When a producer found out she had a voice, she got a record deal. Some of her more famous songs are, Poker Face, Love Game, Just Dance, and Eh Eh Nothing Else I Can Say. All good songs in my opinion.

She is very original, its easy to see why a lot of people like her. Again her songs are VERY catchy, which is always the recipe for success. She's an American singer, born in New York in 1986. Lady Gaga is just her stage name of course, a music producer compared her vocal style to Freddie Mercury so she took the name Gaga from the Queen song Radio Ga-Ga. Check out her website at www.ladygaga.com/splash.aspx She's a really cool new singer and i'm glad i got to know her, i think 2009 was waiting for a person like her, the time is right as they say, but thats just my two cents.
Posted by Andrew at 4/30/2009 02:51:00 PM No comments: 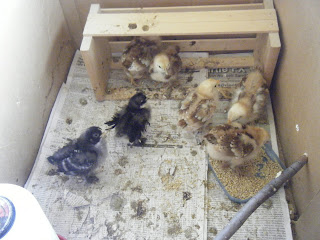 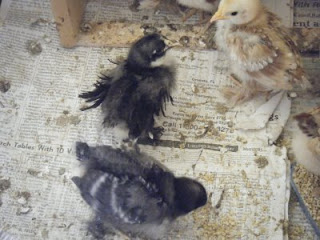 Well two weeks have gone by and here are the baby bantams, they're growing up pretty fast as you can see. The little frizzle will definitely be a frizzle after all, its feathers are more and more frizzled as the days go by. This box is 3 times the size of their original. It doesn't look bigger because all the chicks are bigger but i assure you it is. I had to put two boxes together. Its the height of box technology. Its still too early to tell who will be roosters or hens.
Posted by Andrew at 4/30/2009 03:23:00 AM No comments: 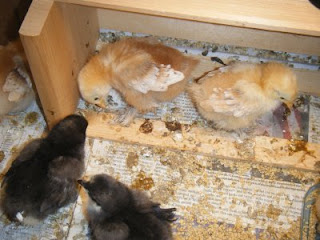 Well i've had the bantam chicks for 7 days now. They have been through 3 cardboard boxes and are really starting to grow. They are eating more and more each day. You can see their progress from day one til now. Their little wing feathers are starting to get a lot bigger You can see tiny tail feathers starting to appear as well. The suspected frizzle is showing little doubt now that that is exactly what it is, as you can see.
Posted by Andrew at 4/24/2009 01:10:00 AM No comments: 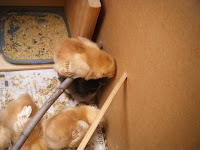 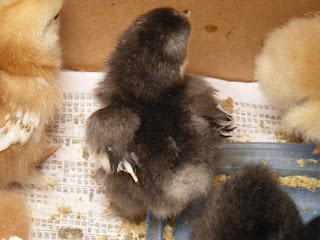 Well day four and the chicks are already bigger, they are starting to get their little wing feathers. The smallest chick i have is a little black one. (see him in the right picture) I noticed its wing feathers are different from the others so i looked it up and i THINK it might be a baby frizzle! A frizzle is a type of feathering where the chickens feathers do not lay flat against its body but curve outward giving it a very frizzled look. That would be pretty cool if it turns out to be one of these frizzle chickens. Only time will tell and i will keep updates here. Also on day 4 the i saw the chicks using their roost for the first time!
Posted by Andrew at 4/20/2009 08:36:00 PM No comments: 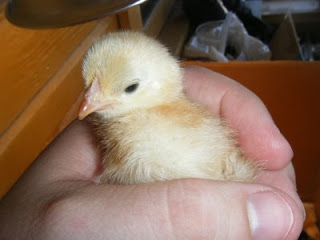 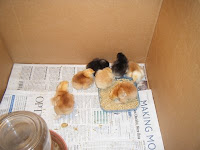 I got a call today at 7:30 telling me my bantam chicks were in, so i got up and went for them! They are here now, i got 7 altogether, two black ones and 5 red/yellow ones. One of them is pretty much all yellow but i feel its probably the same as the others. They all have feathered legs, which is good cause its what i wanted. They are so tiny! I know chicks are usually tiny but these guys are even smaller due to the fact that they are bantams. No clue to their sexes, may be all hens, may be all roosters but odds are its a pretty even mix. So far they are all doing well, they are all eating and drinking and scratching. More on these little guys later.
Posted by Andrew at 4/17/2009 01:39:00 PM No comments:

Blast from the past: SITCOM KITCHENS

I was watching Hangin With Mr. Cooper the other night and it occurred to me that his show had pretty much the same kitchen set as the Cosby show did. It might have even been the same set, i don't know how Hollywood works. Then i realized something, a TON of sitcoms through the 80's and 90's had their kitchens located in the same place, to the left of a very big living room. I thought of all the left sided kitchens then i thought about all the ones that were on the right. I compiled a list of both to see which side had more, the left or the right.

LEFT SIDE KITCHEN:
The Cosby Show
Hangin With Mr. Cooper
Alf
Family Ties
Sister Sister
All in the Family
Diff'rent Strokes
The Facts of Life
Mama's Family
Just the Ten of Us
The Nanny
Everybody Loves Raymond
That 70's Show

Looks like more kitchens were on the left side, but the strangest thing about every single one of these shows, no matter which side the kitchen or living room was on, they all had a two way swinging kitchen door......
Posted by Andrew at 4/10/2009 09:53:00 AM No comments: 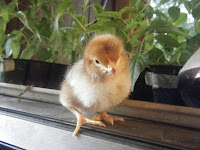 Last summer my dad got some chickens. New Hampshire Reds and Plymouth Rock. They grew, he ate some and now gathers a lot of eggs everyday. Now i like my eggs and eat them often but i came to like the smaller ones better. I rather cook up 3 small eggs instead of 2 normal sized ones, why i don't know. As his chickens grew and became better egg layers the eggs also became larger leaving me still wanting the smaller eggs.

Now for my idea. A "bantam" chicken in a small version of a large one, comparable to the miniature versions of dogs, such as the miniature collie or dachshund or min pin. The thing about smaller chickens is, smaller eggs. So i figure i should get a few of these tiny chickens for their eggs. But how? This is where my plan comes in.

If i get a few "banties" i can have the eggs, im pretty sure my dad would keep them with this other chickens, and i sure hope so because thats a major part of this whole plan. If he says he will then i can go ahead and get some. Ill build Tux my rabbit a new and better pen and use his old one for the chicks, which in a few weeks will be big enough to be outside, also the weather will be warm enough. Soon ill have little eggs to eat. This plan might fall through and very quickly i might add. We will just have to wait and see.
Posted by Andrew at 4/09/2009 02:24:00 AM No comments: