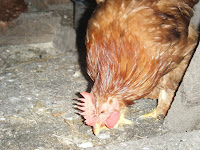 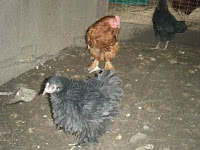 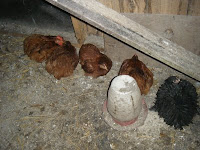 The little bantam chicks are all grown up it would appear. They will be 3 months old next week. I think once the roosters crow and the hens lay an egg it is official, but they look full grown anyway. There are only five now. A few weeks ago something got into the pen and killed the black non-frizzle one and a week before that one of the red ones escaped and was never heard from again.

These are the survivors. I have two roosters, one with yellow feet and one with white feet. I'm not sure if that means anything but at the very least its a good way to tell them apart. The other two red ones are hens and then there is the black frizzle. She still remains by far the coolest chicken. She is also the friendliest and seems to have very little fear. They live with the pheasant chicks at the moment and the chicks that my dad got. Among those new chicks is a bantam, not a cochin bantam like mine but some other type. He's a little fighter as I've seen him start things with the other chickens already. My dad tried putting them with his chickens but they attacked the bantams so he had to take them back out. His big mean barred rock got the ax a week ago... i guess that's what you get for pecking the hand that feeds you!

I'll keep updates on my bantam chicks, who are now chickens i guess. The frizzle is going to be entered into the Harmony Fair this year, and maybe, just maybe I'll get that elusive blue ribbon that i never got in all the years of the fair.
Posted by Andrew at 7/11/2009 04:25:00 PM No comments: