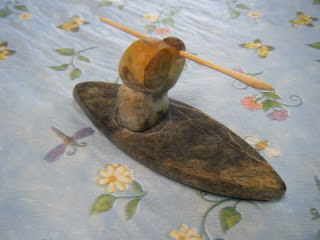 Well i finally finished my second attempt at soapstone carving. I went big with this one even though its only my second try. I decided to make an Eskimo hunter in a kayak. They were two different pieces of rock so their color turned out to be different, which now im glad that they did. It was the first time i had to do detail and it wasn't easy and i learned a lot from doing it, the next time i do a face it will be much better.

I made the spear out of wood that i had to sand down and i drilled a hole, (by hand) into the Eskimo's hand. It's glued in there just as a precaution and so is he. I have a hole in the guy and the kayak and a small piece of wood, all is glued just to be sure he never falls out.

I'm pretty pleased with how it turned out, although any criticism by me or anyone else can be answered with, IT WAS THE SECOND TIME I MADE A CARVING. So i suppose i don't have much to complain about, i don't want to toot my own horn but take some time and look up soapstone carvings, this one looks pretty damn good compared to a lot of whats out there. However its pretty crappy to a lot of whats out there too. Everyone has their own style and its too early for me to even know what mine is just yet. I already have a list of things i want to make including a standing polar bear, a walking grizzly bear, a musk ox and Sedna. (she will have to wait a while until i get even more tools, more skills, more practice and more experience.)

It is father's day so i gave this little guy to my dad in hopes in ends up on his trellis. It also took my dad all of two minutes to break this guy's arm off. Yes, he broke it. It took me hours to make and it took seconds to break, funny how that works out. It was a clean break and will be glued and no one will ever be able to tell.

And so my second carving is now complete. What's next for me? I need some more soapstone, i have some but i'd like bigger hunks of it so i can make bigger sculptures. So until then my inuit hunter will ride the waves of my imagination, hunting in the sea of my mind. Perhaps I'll make him a seal or walrus to hunt.....
Posted by Andrew at 6/21/2009 12:55:00 PM No comments: