http://www.youtube.com/watch?v=aztyFse89mc See the video!
I decided to plant a few orange seeds. Turns out, this CAN be done and often is, even in our cold climate of PA. Not sure how often it's done this time of year but I can't help it that I just got the idea a few weeks ago.
If you put the seeds in a wet paper towel and then put that in a plastic ziplock bag, they will start to grow tiny roots, then its time for dirt. You can also peel off the seed covering, which I did, to help the process go a bit faster.
I put the seeds into a paper towel on the 2nd of this month, the 18th I put each one into their own small cup of dirt. The very next day 2 of the orange seeds sprouted! Yes, I said sprouted! I couldn't believe it myself, in fact I didn't even think I was looking at little sprout but a closer look revealed the truth, the seedlings had come up!
Only time will tell if these little guys will continue to grow and even more importantly, make it through the tough cold winter months ahead. I would love to have a bunch of little seedlings to take outside for the spring time sun and warmth.
Growing these seeds so far has been really fun! Orange trees, lemon trees, and lime trees make great house plants and I suggest you try growing them yourself, but that's just my two cents.
Posted by Andrew at 9/19/2011 09:02:00 PM No comments:

Michael Vick, why I DON'T hate him 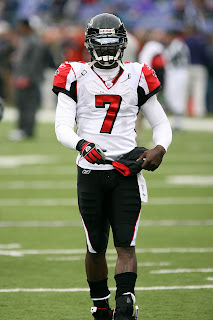 Michael Vick, if you do not know, was the quarterback for the Atlanta Falcons NFL football team. He got into some trouble for dog fighting, owning, running, and breeding, he then went to jail for this crime. After a few years he has been let out of jail, paid many fines, and is still doing community service for his crime of dog fighting. He now plays for the Philadelphia Eagles and many people still boo him and curse his name, saying he shouldn't be allowed to play in the NFL ever again for his dog fighting crimes. Well I don't agree with that view.
This man served TIME IN JAIL for a few dogs fighting each other. This man PAID FINES, and I guarantee a millionaire is going to pay a lot of money. This man DID AND DOES COMMUNITY SERVICE for that crime. He also had to pay back the Atlanta Falcons 19.9 MILLION dollars. How much more do you want? He said he was sorry, he NO LONGER does dog fighting and now just wants to get his life back on track and yet you still say, he doesn't deserve it? Why not? What more should he do? What else can he do? He obviously can't take back what he did in his past. He just wants to move on and better himself, how dare anyone deny him this. What happened to second chances? He only gets one I take it?? What happened to learning from your mistakes? (no matter how stupid) He is proof that our system works for rehabilitating convicts or don't we care about that? How much money would tax payers have to pay to keep a man in jail compared to him out of jail and making money, GOOD MONEY?
Don't get me wrong, I have a problem with people who torture animals and I hate to hear about it and I think it's wrong. However I came up with a list of crimes that I find way worse than dog fighting and here it is!

Murder
Rape
Wife beating
Child sexual abuse
Child physical abuse
Child neglect
drunk driving
Voluntary Manslaughter
Child pornography
armed robbery
drug dealing
drug use
kidnapping
arson
burglay
Fraud
assault
identity theft
forgery
Racketeering
counter fitting
extortion
insider trading
embezzlement
tax evasion
vandalism
shoplifting
Then I suppose Dog fighting, followed by cock fighting and then jay walking. So next time you go to bad mouth Michael Vick, let's remember there are far things worse than a few dogs fighting and killing each other and a man who paid his debt to society and is trying to better himself. But I guess you hold the right to not forgive people? I certainly do not approve with what Michael Vick did, but it's time to let it go. That's just my two cents.
Posted by Andrew at 9/17/2011 09:17:00 PM No comments:

The Gentleman Bandit, 3rd most prolific bank robber in U.S. history, friend of my mothers....

My mother had her 40th graduation reunion tonight. Although nobody mentioned it, the most famous and most successful member of their graduating class was not there...he had been shot to death in a shootout in 1987 in the middle of a bank robbery.

Melvin Dellinger was in my mom's group of friends and I've heard about him my whole life. Not a lot of people can say their mother was friends with a real live bank robber, but I can. He was very hard to catch because he was so smart. My mother always said how intelligent he was. He robbed 27 banks in Colorado alone before he was shot to death, how cool of a way to die is that?! He was known as the gentleman bandit because he was well dressed and very polite during his robberies, often apologizing to the tellers as he robbed them at gun point.

When it comes to bank robbers in U.S. History, including the old west, Melvin ranks 3rd all time, which is pretty good. Not getting caught helps I'm sure. My mom always told me how he was dating the English teacher's daughter. Once they decided to run away together and they stole her parents car, they drove really fast until the gas ran out and so they didn't make it far. With all his potential, somehow Melvin ended up in armed robbery. He robbed banks in Colorado, Minnesota, Washington, New York, Missouri, and Indiana. They believe there may have been more that were unknown. In October of 1987, on the 7th, Melvin decided to rob a bank in Denver, he already had robbed it once before and got away with it, I suppose he felt he could do it again.....he was wrong. The Gentleman Bandit met his end in a heavy gunfire from the police. A note in his pocket read, "My wife knew nothing about this. Please tell her I'm sorry. Thanks."

History happens everyday and sometimes the people we call friends go off and become famous. Who would think a 1971 graduate from little Williamsburg PA would become a nationally known bank robber? Not my mom who said, she would have never thought he could do such a thing.
Posted by Andrew at 9/17/2011 08:26:00 PM 1 comment:

Well here they are yet again. Every year since i was a teenager i've picked the outcome of the regular NFL season, believe it or not, i've actually guessed the super bowl correct once. Here are my preseason picks!
AFC North
Pittsburgh
Baltimore
Cleveland
Cincinnati
AFC South
Houston
Tennessee
Indianapolis
Jacksonville
AFC East
New England
New Jersey
Buffalo
Miami
AFC West
San Diego
Oakland
Kansas City
Denver
NFC North
Detroit
Green Bay
Chicago
Minnesota
NFC South
Atlanta
New Orleans
Tampa Bay
Carolina
NFC East
Philadelphia
Dallas
New York
Washington
NFC West
Seattle
Arizona
San Fransisco
St. Louis
This wasn't an easy year to pick but my predictions are, no Manning, no success for the colts. The dream team won't live up to the hype although with Vick they will do well. The Jets will not win the AFC championship as they have been trying for the past two years in a row. Green Bay was a flash in the pan last year and the Steelers will be one of the best teams in the NFL. Detroit will earn respect and will have the best season in their last 20 years, but that's not that hard to do. Buffalo will start to climb out of the basement but in such a tough division they can only go so far. I will review this post in December and see where I stand then, after all these are just predictions and you never know what's going to happen throughout the year.
Posted by Andrew at 9/11/2011 12:55:00 PM No comments: