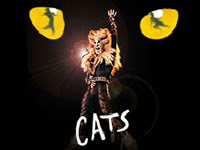 I went to see Andrew Lloyd Webber's CATS in Baltimore over the weekend. This is the second time that i have seen it on the live stage, so how was it? PHENOMENAL, as always. There is a clear reason why this was the longest running show on Broadway. Nothing beats seeing it in person either, the lights, the sounds, the effects, the songs, the dances, everything was just amazing.

For those of you who don't know the plot to cats, its just basically about....well cats. Poems were taken from T.S. Elliot and made into this musical about a group of cats who join once a year for a very special occasion. At the end of the night, the leader of the cats will choose one very special cat so they may be reborn into a new cat life. The play is about each cat saying why they feel they should be the chosen one or plead a case for the another one they think it should be. I think the play is better if you're a cat person yourself, you'd just get it better. Not to say if you're not a cat person you wouldn't like this show, i think everyone should see it at least once.

I knew all of the songs by heart but i still give them an A plus. The dancers were amazing too, i don't know how people can bend that way or stretch like that but they do and its pretty cool to see so i give them an A plus as well. My seat was great too, not too far back and right in the middle. The theater was nice too so my entire experience was an overall A plus. If you haven't seen CATS yet, do yourself a favor and go. Rent the video first if you are skeptical. I still think this is by far the best musical out there but that is just my two cents.
Posted by Andrew at 3/28/2009 01:26:00 PM No comments:

On October 29th 2008 i wrote a blog about my first snake that went missing, my rosy boa named Chac. Well today i feel i have found him at last.

While looking for some boards in the basement i saw what i thought was some kind of sting but a closer look reviled it was a dead snake! Could it be MY snake? Escaped from my room and somehow made it all the way into the basement? I picked it up to look at it, the size was right and shape of the head looks like a rosy boa. Could be another snake but im pretty sure that it was my missing pet snake. I hope it is because its closure that i would have gone for the rest of my life wondering whatever happened to my snake after it got loose.
Posted by Andrew at 3/23/2009 07:26:00 PM No comments: 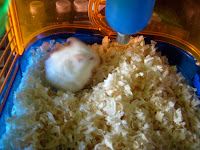 He was my first albino hamster. I waited a very long time for something like him to come along. His father was Jester Jr. A male that i originally thought was a female, his father was Jester. A male from my very first litter. Crunchenator was his father, the male of my original pair. I remember when he was born into a very large group of 7 babies. As they grew by the day i noticed he was a very light colored hamster. Soon it was obvious he was pure white.

He was white as snow and his eyes were red like fire. Every one of his babies had red eyes. Because they looked like evil eyes and because i like the movie, THE GOOD, THE BAD AND THE UGLY, i named him Angel Eyes. Angel Eyes lived a very long life. His first litter was three albinos, something close to impossible to produce if you look at the odds and genetics. He never produced another Albino and i didn't keep any from that litter. In his whole life he had 14 babies that survived. I only have one of those babies right now, "Argonaut."

LIFE: THE FIRST DAY OF SPRING 09

Well it snowed today. Yes thats right, on the first day of spring. I have decided that this year i am really going to be into fishing. That was pretty random, is that what you're saying? Well i don't know why or how but at some point i became all about fishing. Its early, only being March and all but for the 2 times i've tried, i haven't even seen a fish, let alone caught one. I'll keep you updated with this site, my goal is to catch the biggest fish i have ever caught. That won't be hard, i think the biggest one ever was around a foot long? I won a tackle box on ebay, a great deal i might add and i found a fishing pole at a lake two years ago so i'm ready to go! Fishing is a fun, relaxing way to relieve stress and spend time out doors, i think more people should get into it but thats just my two cents.
Posted by Andrew at 3/21/2009 12:43:00 PM No comments:

I heard my mom talking with my older sister on the phone today and she said, "nothing looks good on a fat person." This made me laugh but i have to agree, well right there on the spot i started to sing a song about that and it was so good i had to write it down and add more than two lines. So here it is, my new song, "Nothing Looks Good On A Fat Person."