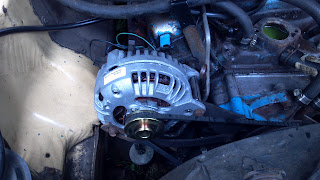 Finally a weekend without rain! Although it was cloudy all day and looked as if it was going to rain at any minute, it held off and I was able to get some work done. I installed the new alternator, not as simple as everyone makes it out to be but even so it's only a several minute job. With some help from my Dakota in the way of a jump, the Charger roared to life on the first try. I suppose it was the alternator after all....or was it? The Charger started just fine on it's own several times until it just plain wouldn't start. Even a jump wouldn't get it going and I was back where I started. Now the list includes a voltage regulator and a new starter, two parts I have narrowed the problem down to.
I also added the thermostat using gasket sealing cement. Can you see where the thermostat is supposed to go in this picture? The big open hole without a radiator hose is a hint. Either way I am getting closer to getting the Charger up and running.
Posted by Andrew at 8/11/2012 09:52:00 PM