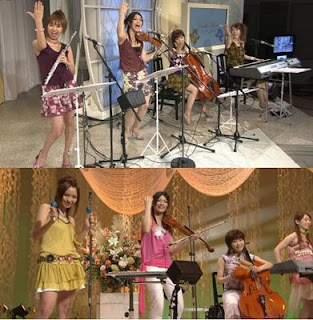 So i stumbled upon a new band today. Its four Japanese girls playing the piano, violin, cello and flute. These four are AMAZING! They play anything and everything! Give yourself a chance to get to know this quartet and their unique yet familiar sound!

Some of the songs i've heard that they do include, the theme from Never-Ending Story, Mission Impossible theme, Fur Elise, Knockin' On Heaven's Door, Swanee River, The Four Seasons-Spring, the Saber Dance, theme from Rocky, We Are The Champions, theme from The great Escape, Take Me Home Country Roads, Stand by Me, theme from Pink Panther, Mrs. Robinson, The Locomotion, Imagine, Puff The Magic Dragon, Pretty Woman, Top Of The World, Like A Rolling Stone, What A Feeling from Flashdance, Over The Rainbow, Sir Duke, theme from E.T., Tequila, Mambo Number 5, a ton of Disney songs and classic hits plus many, many more! They put their own twist on all of these classics and I haven't heard a bad one yet!

They do something for everyone basically, go to Youtube and look up, Vanilla Mood, then just listen to a song you like, you wont be disappointed. Their style is peppy and cheery as well as beautiful and mellow. Without using lyrics they make for a GREAT background band. Wait i take that back, they all yelled, TEQUILA in that song, but other than that no words.

I've never had a favorite band in all of my life because i never could sit down and love each and every song a particular band did, this is as close as I'm going to get. Vanilla Mood is just down right spectacular. I think the key board player might be retarded or something but this group is just outstanding. So Keiko, Mariko, Yui and Waka here's to you! Please look them up because i love them and its only been 20 minutes and thats my two cents.