THE STORY OF MY FIRST CAR: PART 1

Your first car. You'll never forget it. You probably miss it because you probably don't have it anymore. Very few of us are lucky enough or privileged enough to be handed the keys to our dream car for our 16th birthday. Many of us get the family car as a "hand me down" car from our parents. Most of us, however, get the cheapest piece of crap money can buy! This is how I got my first car, it certainly wasn't my dream car and it certainly wasn't expensive but I certainly will never forget it. This then, is it's story. 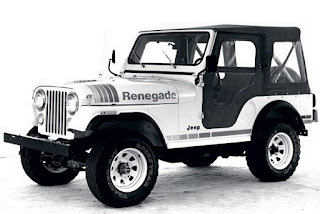 I'm 3 years younger than my older sister. When she turned 16 my dad got her an old Jeep Renegade from some college kid. (A renegade was the precursor to the wrangler) My sister didn't want it because it was a stick shift and was "dirty looking." Feeling a bit offended I remember my dad saying, FINE THEN, ANDREW CAN HAVE IT WHEN HE TURNS 16. This thrilled me because I could have cared less, I wanted anything that I could sit in and would move. It was green, and red, and a the tail gate was screwed shut to hold it together. There were many holes in it that needed patched but it had really nice speakers in it. For 3 years it sat in my grandfather's garage and I would sit in that Jeep, never running it or getting to driving it, pretending to drive around but the whole time knowing someday it would be mine. I turned 16 and before I could get my license my dad sold the Jeep to someone for parts. No idea whatever happened to that Jeep but I was pretty disapointed.

I didn't care what kind of car I got as long as it was mine. I was tired of driving my mom's car around and not getting to use it when I wanted it. My dad took me to look at a cheap old car, I couldn't even tell you what it was, I just remembered it was gold in color. It was night time and I think it was raining too and I had to either hold the door shut or get in from the passenger side door or something like that but the bottom line was, my dad was willing to buy this car for me on the spot and I could have my very own car that night. It just didn't feel right and beggers can't be choosy but I passed on it, wondering if I had made a big mistake.

I agree with you. It can be hard to forget about your first car. It is the one where you first learned how to drive. The one that let you feel the taste of freedom. The one you were with through the ups and downs of your teenage life. It’s definitely the best friend you could ever have!