MY TOP 10 FAVORITE BASS PLAYERS OF ALL TIME

As a bassist myself, I love to hear the bass lines of my favorite songs and over the past few years as I've learned more and more about the bass guitar itself, I have come to learn more about the people that play them too. BUT there are a few that stand out in mind as the best and my favorite. This is a list of several famous bass players, some you may know, and some you may not.

I feel the bass is an underrated instrument and I got into it because I believed it would be easier to learn than the electric guitar, people told me the bass was harder to play and I responded with, it has 4 strings instead of 6, how can it be? But the truth is, it is harder to play. It really makes me appreciate the people who play bass guitar. Keep in mind this list is of my favorites, not necessarily what I consider to be the best. 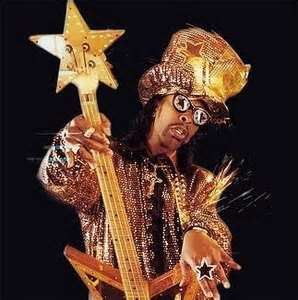 Bootsy Collins is known as one of the best Bassists of all time, he's the guy Flea listened to for tips...FLEA. Playing for James Brown and then Parliament-Funkadelic, Bootsy is one of the BEST when it comes to the slapping and popping technique and giving a song that funky sound. I'll always think of "Groove Is In The Heart" by Deee-lite, a great song and that's him playing the bass. Truth is I can play next to nothing when it comes to basslines by Bootsy, he's just that good. 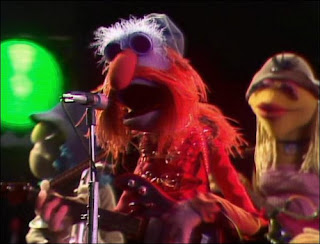 Floyd, the bassist from Dr. Teeth and the Electric Mayhem is one of the most recognizable Muppets, and that's saying a lot because there are a ton of them. I'd like to point out that Floyd is PINK...a possible joke? I think it may have been. His name is also a reference to the Beatles, not to mention Floyd plays his Bass left handed. Appearing on the Muppet Show, and in most of the Muppet movies, Floyd has always been one of my favorite Muppets, and that was before I knew he was the bassist. Floyd had several lead vocals in the Muppet Show's run and appeared in every episode. 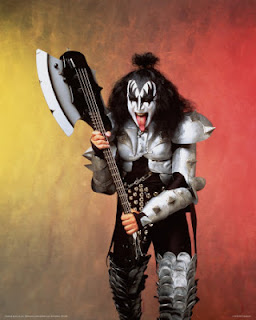 Yes, Gene Simmons, the front man of KISS is the bassist, a little known fact to people other than KISS fans. Although I am not a big KISS fan myself, their songs have always been fun to play, some are pretty simple and some are pretty tough and Gene is actually quite good. Here he is with his signature AXE bass guitar, quite possibly the coolest bass ever to be played. Often using a pick, Gene has been rocking out with his bass guitar for decades, and probably decades to come. 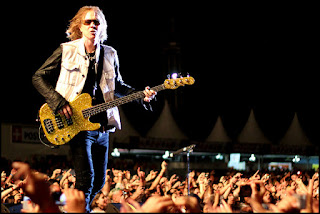 Tom hamilton has been playing with Aerosmith since the 1970's and in that time he has played the bass line to some of my favorite songs of all time. Long time friend of guitarist, Joe Perry, Tom was jamming on his bass, which he switched over to from guitar, since the age of 14. Surprisingly Aerosmith only has one number one song, but we all can name so many and I like way more than just one of their songs, and it is Tom's wonderful basslines that catch my ear, whether using a pick or his fingers, Tom is one of my favorite bass players. 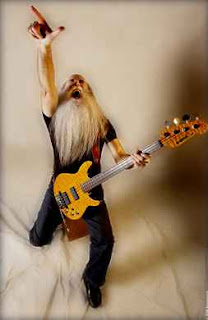 Who is Leland Sklar you're asking? Well I guarantee you've heard him playing the bass. Pretty sure you've never heard him play hu? Well you have. Still not convinced? I would put money on it that you HAVE heard Leland playing bass on the radio, on tv, in the movies, or on MTV (back when they had music videos that is). That's a real beard by the way, Leland Sklar is the ultimate wondering bassist, going from band to band and musician to musician. Leland has played the bass for the following bands or musicians: James Taylor, Phil Collins, Air Supply, Clint Black, Jimmy Buffet, Glen Campbell, Ray Charles, Kim Carnes, David Cassidy, Neil Diamond, The Doors, Art Garfunkel, Vince Gill, Amy Grant, Faith Hill, Hall and Oates, Lyle Lovitt, Wynona Judd, Lisa Loeb, Reba McEntire, Ricky Martin, Randy Newman, Bette Midler, Dolly Parton, The Oak Ridge Boys, Aron Nevill, Olivia Newton-John, Bonnie Raitte, LeAnn Rimes, Linda Ronstadt, Diana Ross, Rod Stewart, George Strait, Barbara Streisand, The Weather Girls, Wilson Phillips, Trisha Yearwood, and Merle Haggard JUST TO NAME A FEW. Believe me, you've heard this man play his bass, and it goes to show how versatile of player he must be, probably the most versatile bass player that ever lived...impressive just doesn't cut it when describing Leland. 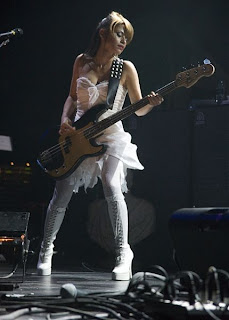 D'arcy wretzky, the lone female from the 90's band Smashing Pumpkins! The only female on my list and definitely a favorite of mine when it comes to bass lines. I love playing "Bullets With Butterfly Wings" and in my opinion it's the great bass line that makes this song so good. D'arcy is a master with the pick and almost exclusively used a Fender Jazz Bass, which may surprise some people but it gave the band such a distinct bass sound. D'arcy's unique alternative sound was innovative and refreshing for the time period and let's face it, she looked better doing it than any other bass player out there. 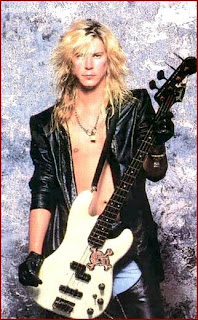 Axl, Slash, Izzy, with names so famous in such a famous band it would be easy to get swallowed up and over shadowed, especially in a heavy metal band where the guitars are so loud and prominent, but I think Duff's signature sounding bass kept him from falling into that trap. Listen to a Guns'N'Roses song sometime without Duff or just listen to Duff's part and you'll see a big difference, Duff definitely contributed to the band's distinct sound. I think when it comes to using a pick, Duff is probably the best, known for dropping down and his own special combination of amplifiers and pickups to make his signature sound, Duff is a very recognizable bassist. Helping write songs for Izzy and Slash's albums, Duff even played the bass on some of these albums after Guns N Roses. I love this band, and I love Duff's style, although not entirely unique in his genre, I would venture to say he did it best. 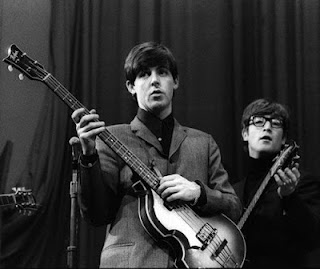 Paul McCartney, the most talented of all the Beatles, still playing to this day and responsible for writing some of the most famous songs of all time. Paul McCartney was a pioneer when it came to the bass guitar, seen here with his Hofner Style Bass guitar pictured above. Let's not forget the bass guitar was only invented  in 1950 by Leo Fender, and the Beatles came together in 1960 so Paul had very little to go on when it came to using a bass guitar in a band. Paul McCartney reluctantly became the band's bassist when their original member Stuart Scutcliffe left the band. I'm glad he did because although Paul can play just about every instrument, often seen playing piano and guitar, it was the bass he helped to shape into an important part of any band. You can tell how much better of a bassist Paul becomes as his career continued, the early songs have simple bass lines that are easy to play but as the Beatles progressed, so did his bass as the bass lines became more intricate and important. In my opinion Paul McCartney helped to put the bass guitar on the map, and for that I thank him and say we owe him a lot. Sir Paul McCartney is also the only bass playing Knight since Sir Lancelot.  (facts may not be correct) 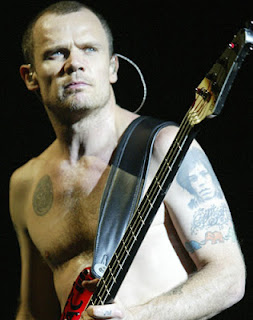 Flea, the best when it comes to slapping and popping, in my opinion. I can't play much of the Red Hot Chili Peppers because Flea is just that good. People disagree when I say it, but I really think Flea carried this band, it was such a unique unmatched sound that his bass brought to the band, it's hard to imagine a RHCP song without him! If you ask me, when the band changed their style and slowed down their songs, it slowed down Flea and his bass, and it ultimately ended the band's success. Again, just my opinion. Flea loves to slide and loves to slap and pop AND to add his own little things, so playing his songs so they sound like him is near impossible for me and most others. Highly respected in the bass world, Flea looked up to Bootsy Collins, but I think Flea's own aggressive edgy twist on the bass launches him past Bootsy. Flea also appears in the Back to the Future movies as Marty's friend Needles, in case you were wondering. He has actually appeared in several movies and was the voice of Donny from The Wild Thornberrys. When it comes to playing the bass I really think Flea is the best in the world, many would agree, however that doesn't make him my favorite, although he is a close second. 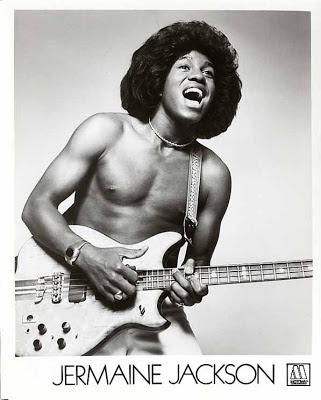 Jermaine Jackson, Michael Jackson's older brother. He is my favorite bass player, the legendary Jackson 5 had so many hits in the 60's and the bass lines were such a big part of these songs. Listen to a Jackson 5 song, and pick out Jermaine's bass lines, it will probably surprise you at how important of a part they are in the song. Jermaine actually has several solo albums and he really is an amazing bass player, not the best, most well known, well liked, or talented, Jermaine still manages to be my favorite. The bass line was something that Motown felt was very important, I feel Michael carried this idea into his own solo career as most of Michael Jackson's songs have very unique and recognizable bass lines. When I first started to learn the bass, "I Want You Back" was on the top of my list of songs I wanted to learn to play and it took me forever, I thought it was so hard but it remains probably my most favorite song that I can play to this day. With the responsibility of learning and playing the most difficult instrument in the Jackson 5, I'd say Jermaine did a good job and hopefully avoided some beatings from his father Joseph. Jermaine is probably the most underrated bassist there is but I really think people that know the bass can appreciate his contributions to the instrument and maybe you will now too.

The picture you posted as D'Arcy Wretzky is not D'Arcy. It is one of the many that have replaced her. The one in the picture is Ginger Pooley. D'Arcy WAS somking hot and is now an overweight crackhead with zits and sores all over her face. Such a waste...