Well it's that time of year again, the day of the year when a groundhog comes out of his hole at sunup to see if he can see his shadow, if he does, there will be six more weeks of winter, if he doesn't it means there will be an early spring.

What on earth??? Well it's a German thing but living this close to Punxsutawney PA, we were always big on Ground Hog Day. Going to this event is actually a pretty cool experience and I encourage everyone to do it at least once. Sure it's pointless, but most things in life are. It's basically 30 thousand screaming drunk people, freezing to death in a farmer's field, don't expect too much more, other than a fireworks display, cause they have that too.

It had been 11 years since I last went, and that was NOT a good time. It was 24 degrees in 2002 and I wasn't dressed for the occasion, also getting there at 2 am for something that happens at 7:28 am was not good planning on our part. It was something I swore I would never do again but here I was, in Punxsutawney for the 127th trip to Gobbler's knob to watch a sedated overweight groundhog look for his shadow. This year it was 8 degrees out, but I was ready for it with several layers, under armor socks, and my Spyder snowboarding jacket. It really wasn't too bad considering we got to the field at 6:30am. BTW, if you haven't gone but you have watched the movie, it's nothing like the movie depicts, it doesn't happen in the middle of the town, it is quite literally in the middle of a farmer's field surrounded by trees. The movie wasn't even shot in PA.

This year the sun came up and they dragged him out of his stump and forced him to look for his shadow, which he didn't see, and the crowd cheered due to the news of an early spring. The truth is Punxsutawney Phil is only correct 39% of the time, which is pretty close to actual weathermen. 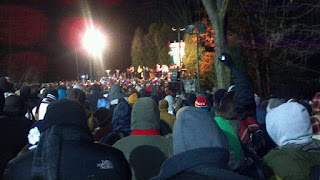 I do recommend going, at least once in a life time, that's about as much as most people can stand. Just know what you're in for though. The town really tries to put on a good time for people and it shows with their hospitality and friendly disposition. You can't dress warm enough, after all it is February in PA, so be ready for that. And if you're claustrophobic be warned that you will be touching other people non stop. Which brings me to my next question, in a wall to wall sea of people sometimes some idiot would come pushing their way through saying, "sorry, excuse me, sorry" and it's like.....where do you think you're going??? As if the front of a crowd of 35,000 people has extra space for you. So go, have a good time, enjoy yourselves, and then NEVER go again, but that's just my two cents.
Posted by Andrew at 2/03/2013 12:47:00 PM