LIFE: the mystery of KIRBY, solved... 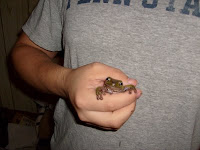 Wednesday, February the 21st, 2007 i brought home my first Dumpy Tree Frog, also known as a White's tree frog. (pictured left) I named the little guy Kirby because like the video game cream puff when he saw food he opened his mouth and lunged at it, swallowing it whole. One day i came in to find little Kirby had found a way out of his tank. I saw little dirt marks left behind on the tank top and down the side and on the desk. I looked for days and never found him, wherever he was i knew he must be dead when a week had gone by. FLASH FORWARD

Friday, November the 21st, 2008 i was cleaning my turtle tank and decided to add my old fish filter to help clean the water. It hadn't been used in years but i knew it still worked so i took it to the bathroom to give it a good cleaning up. As i took it apart something fell out that shouldn't have been in there, it was strange looking and i couldn't tell what it was at first but as i saw something that looked like long bones, i knew what it was. "Kirby!" I gasped. 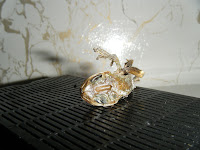