A Day In The Life Of A Stay At Home Dad 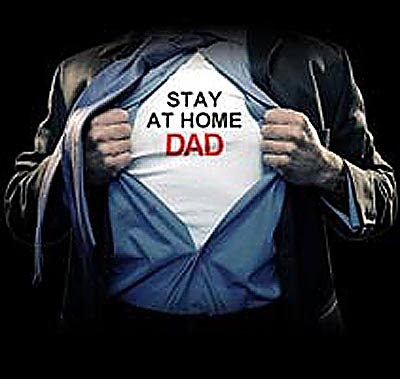 
I decided to do laundry. Since I'm a man and have never seen, let alone ever used a washing machine before in my life, I naturally dumped in the entire bottle of laundry detergent. There were directions, but who needs those? I knew it needed more, so I added some bubble bath, just to make sure my whites are sparkling white! I then went into the kitchen to make breakfast.

Again, being a father, I never used appliances like toasters before. I put in some bread into the toaster and then attempted to make eggs using the stove. The toaster began smoking and two black pieces of toast popped out. I grabbed them, because I'm so stupid that I didn't know black and smoking usually indicates hot, they burned my hand so I screamed and threw them across the room.

Just then, a massive wall of bubbles came rolling into the kitchen coming from that washing machine you almost forgot about. Frantically, I searched for the worst possible thing to aid me in this situation...a broom! I began to sweep and attack the wall of bubbles, oddly enough, that didn't do much.

All of a sudden, the frying pan burst into high flames, I ran over and started to blow on the fire and wave the broom at it, attempting to put it out. The broom caught on fire and so now I had a torch I was waving around trying to put out while still blowing on the fire in the pan. In the middle of this the baby starts crying but the TV was turned up so loud, they both almost drowned out the fire alarm.

While I was waving my torch broom around, it caught the curtains above the sink on fire. I smacked them down into the sink and turned on the water, I started to beat on them with the broom.

The phone rang at this point and although I was a little busy with multiple disasters, I still decided to answer it, just to find my wife on the other end asking how things were going. When she heard all the commotion she asked what was going on in our house, I quickly came up with a lame lie to fool her and I said, "Everything is fine, nothing is wrong, I have everything under control, I can handle it." She then asked what that beeping noise was and after stuttering trying to come up with another lie, I told her, "I was just testing the smoke detector and it's working just fine honey, gotta go, bye!" and I slammed down the phone and continued to battle the soap suds and fire at the same time.

At this point the curtains that were on fire were now out, but they had clogged the sink drain and the water I had turned on was now overflowing and running down to the floor because I never shut off the water. I shut off the water and dipped the still flaming broom into the sink water and turned my attention to the other fire still burning in the frying pan.

I looked for the worst thing that could put out a fire, and grabbed the baby's milk bottle and squirted it on the fire and then I smacked the smoke detector with the broom, knocking it down and then instead of turning it off or taking the batteries out, I jumped on it until it stopped beeping.

Breathing heavily, I sat down in a heap at the kitchen table and squirted some of the milk into my coffee and took a big swig. That's when I noticed the bottle was labeled as, "Breast Milk." Horrified, I spit the coffee out coughing and making a grossed-out face. The baby laughed at me.