G'day mates! I traveled down under to get a taste of a real Australian cheese. Old Croc cheese warns you that their cheese has bite, let's find out if it did. I know cheese really never comes to mind when you think of Australia but the truth is they make and eat it. The only thing I've really had from Australia would be lamb and I'm sure nothing from the Outback Steak House counts, so this is pretty new for me. 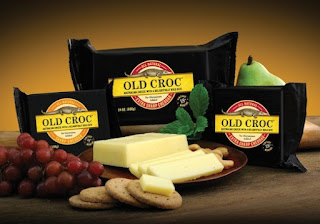 History: Old Croc describes the history of dairy by Australians on their website. As legend has it, 7 cows were brought to Australia but escaped. A few years later those few cows had grown into a heard of 60 and so Australian dairy began! Not sure if that is true but it's a cool story. Old Croc is a pretty new label, only being here in the US for a couple of years but their cheese is vintage and they have been making it since the 1700's. Let's not forget another other important factor, Australia was British and the British were the ones that created cheddar, so the heritage and roots are definitely there. 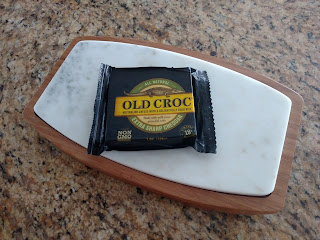 Old Croc was a great example of sharp cheddar. I don't know if I would call it extra sharp though. It didn't matter because it still had a great taste. It didn't crumble as much as I thought it was going to, especially since it was aged for 18 months. The texture was rather creamy, again for being an extra sharp cheddar. There were no protein crystals in it and if you don't like those then this is a great choice for you. Old Croc was tangy and there was a bit of sting to it, hence their slogan of this cheese, "having bite," but it definitely didn't make my mouth pucker. It had a full flavor and was nutty but it really made me keep coming back for more. I really enjoyed eating this and it didn't last long in my house! 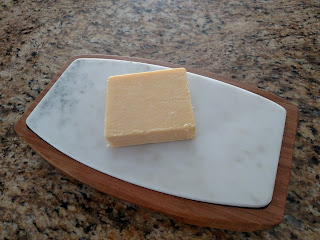 The price was the best so far out of all the cheese I have tried. $6.50 for 7 oz. It was worth it in my opinion. A huge fan of extra sharp cheddar could probably find a lot to complain about but if you're like me and love all kinds of cheese and venture out of cheddar land, then I suggest trying this Australian cheddar. For the price I feel that if you use this with a recipe that calls for sharp cheddar cheese you could make a really interesting signature dish and it sounds cool to say, "I used an Australian extra sharp cheddar cheese that was aged for 18 months." This would go great with a brown ale as well. 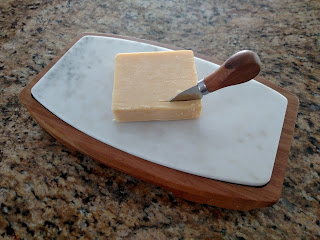 I will give this Australian cheddar a solid 8 out of 10, mainly because something that is labeled as, "extra sharp," should be a bit more sharp in my opinion. I would definitely try this again and for the price it's a great cheese for using in specialty dishes that you don't want to spend a ton of money on the cheese. Sometimes finding good cheese can be difficult so next time trying looking down under, but that's just my two cents.


Cheese Fact: Turophilia is a love of or obsession with cheese.


Thank you for reading and check back again with my next entry in this cheese series!

Tangy, tasty. Looking at reviews curious about how it's rated at home. Good stuff. They are clearly not sending us their velveeta

I tried your new croc cheese. I did not care for the Sharp Cheddar cheese, it tasted bad. So, I tried the Extra Sharp Cheddar Cheese it was wonderful. I did throw our the Sharp cheddar cheese since it tasted very bad, could of been why it was get one buy one for free. The cheese does not hold it's greatness after a few days the taste goes south. Enjoy!

This is the BEST Cheddar I have ever tasted in 60+years, good on ya, Aussies! It has the little salt crystals in it, like the best Parmesans and Romanos, I couldnt leave it alone, and I really dont eat cheese regularly.
I loved the part about "the bite" very cute! This cheese is worth every penny, thanks a bunch! Bonzers!

Never heard of it here in Australia and I'm nearly 60.

An average sharp cheddar,but no better than our own Canadian cheeses.I like Irish cheese better,also some of the English cheeses.