Oh! Top O' the mornin' to ya! The newest cheese that I had the pleasure of trying was the Dubliner, from Kellygold, a cheese imported straight from Ireland! 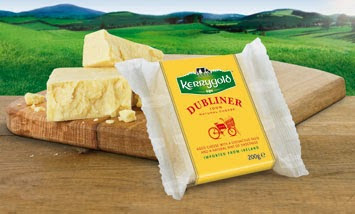 HISTORY: This is a rather new cheese considering some are 100's of years old. The Kerrygold company has only been around since 1962 but it is Ireland's most famous cheese company. Orginally called, "Argalen," this cheese was created in 1990 to be a replacement for cheddar but would still use the same process and equipment that cheddar used. Although it is named after the city of Dublin, it is actually made in Cork. It is a very popular cheese in Ireland and since the country is known for its green rolling hills, what better place for cows to produce some special milk? 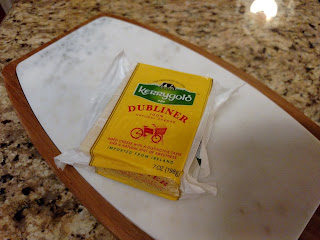 TASTE: The Dubliner has its flavor roots in cheddar cheese but one bite will tell you, there's a lot more going on! The taste is mild and for a split second you'd guess it was cheddar but quickly you realize the flavor has more to it than cheddar. It is nutty with a hint of sweetness and it does not have a lingering after taste. It is aged for 12 months but it isn't as sharp as you might expect. You'll often hear its taste described as a mixture of cheddar and parmesan and I would have to agree with that.  Its texture is hard and it will crumble but more like a sharp cheddar than anything else. This really is a robust, full-flavored cheese. 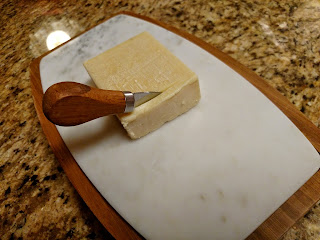 This would be a great cheese to entertain with on a cheese board because people would guess it is cheddar but not like any cheddar they've ever had before. Dubliner would go great with Cabernet or a dark beer.

Ireland is well known for its alcohol but this cheese proves they know what they're doing with dairy as well. Dubliner would be a great cheese choice for the dark beer lover. This is a specialty cheese that would be absolutely perfect with a pint of Guinness after a dinner of corned beef and cabbage! Although very close to cheddar, it really is its own thing and I think anyone Irish should try it. I give it a 9 out of 10, mostly because it is so new and not very original, still definitely worth a try AND worth the money at 5.99 for 7oz, a pretty good value all things considered.

At the end of MY rainbow you would definitely find a pot of Kerrygold Dubliner, but that's just my two cents.

CHEESE TIP: Cheese should be stored at the same temperature that it was aged, usually this is about 50 degrees Fahrenheit.


Thank you for reading and I hope you check back for my next entry in this series!