Although released back into the wild, having "Scare," my pet crow live with us, is something I'll never forget.

Scare was a crow that I nursed back to health after he was shot. I didn't plan to let him go in the end, but he was a wild bird and it's what he deserved. This is the story all about how I took a crow and turned his life upside down and I'd like to take a minute, just sit right there and I'll tell you how I returned a crow to fly in the air. 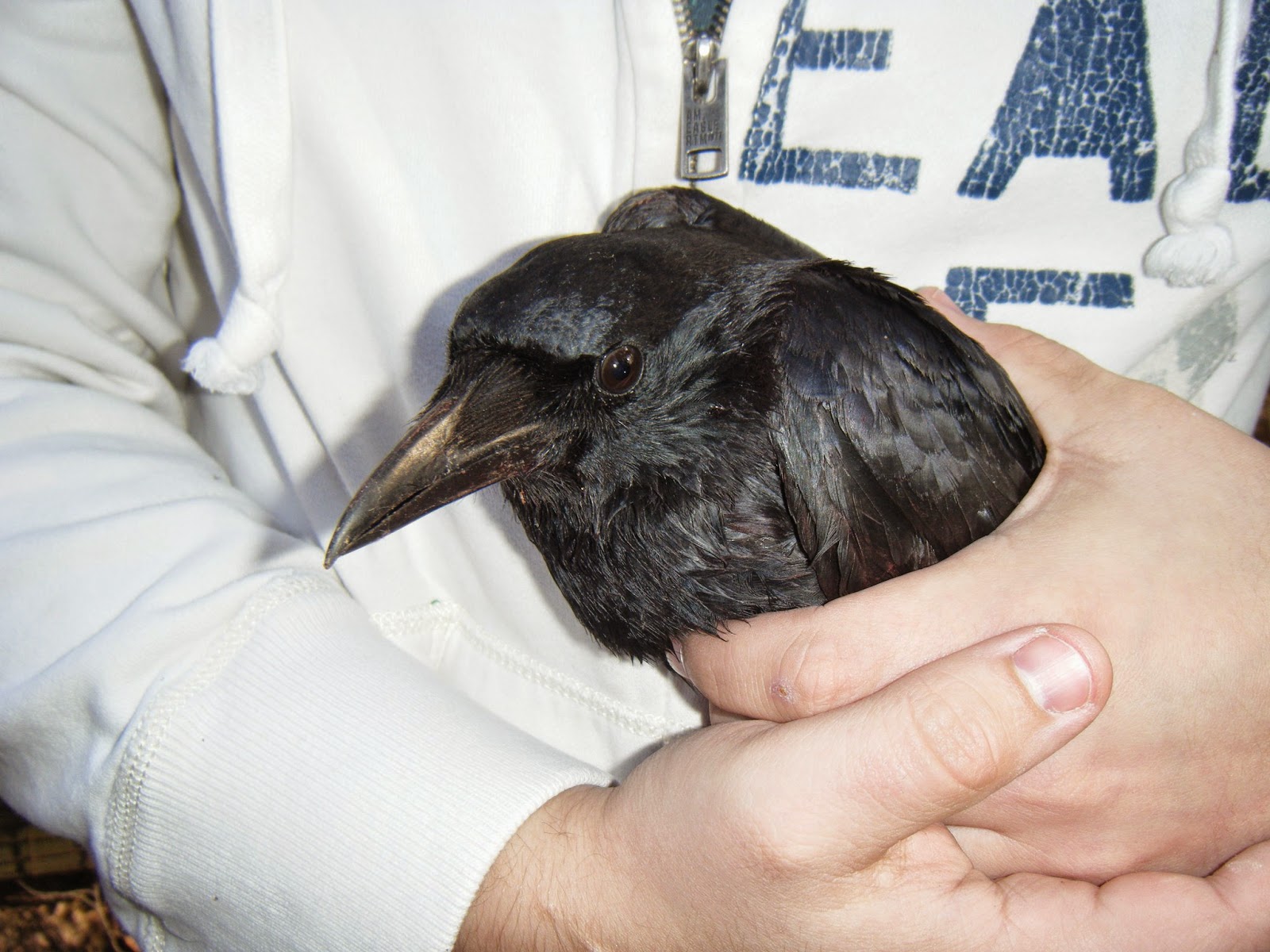 Some men were putting a new roof on my dad's house and of course they had a shotgun with them so when some crows came flying over, they decided to take some shots. Well they hit one but he wasn't dead yet he couldn't fly since he was shot in the wing. My dad caught him for me. My dad owed me a crow so he didn't even ask if I wanted it before he decided to catch it for me. 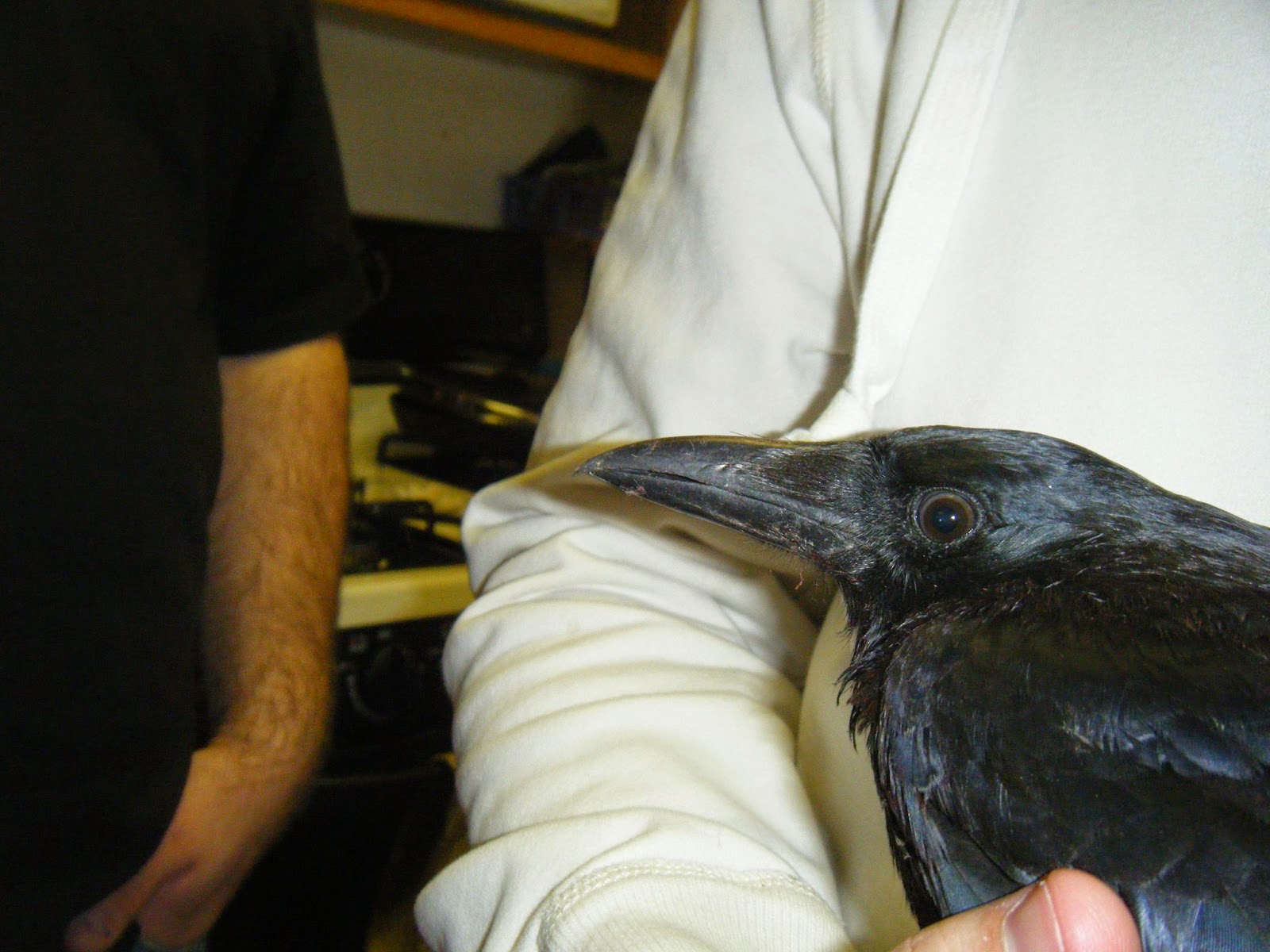 A few years before this my dad was on a job site. There was a crow's nest in a nearby tree. One of my dad's coworkers climbed the tree and took the 3 babies out of the nest. He wanted one for a pet and thought he'd give the other two away. He asked my dad if he thought I'd like one of the babies and he was told, no, no I wouldn't want one. WHAT?? No clue what my dad was thinking that day but needless to say I wasn't happy about it. He actually said to me and I quote, "Sorry. Well, if anyone ever catches another baby crow and asks me if you want it, I will tell them yes." Really? thanks dad, guess how many times THAT'S happened since then??? 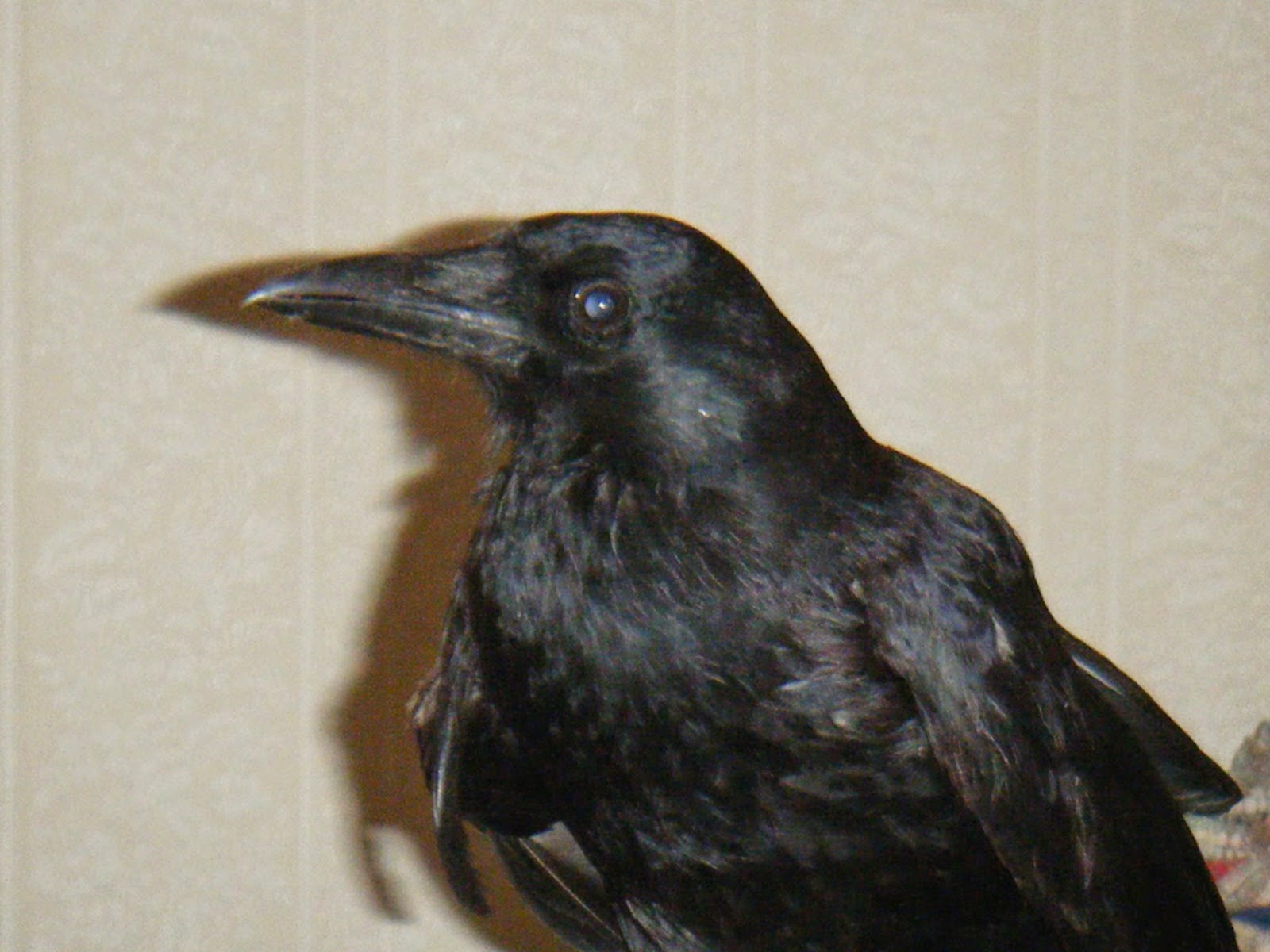 My dad calls me up and tells me he caught a wounded crow and if I want it, I can have it. Well of course I do and I rushed to his house to see this little guy. A face only a mother could love I suppose. He wasn't afraid of me or us. As you can see he let us hold him right away. He would also sit on my shoulder and walk around the tops of couches and chairs. 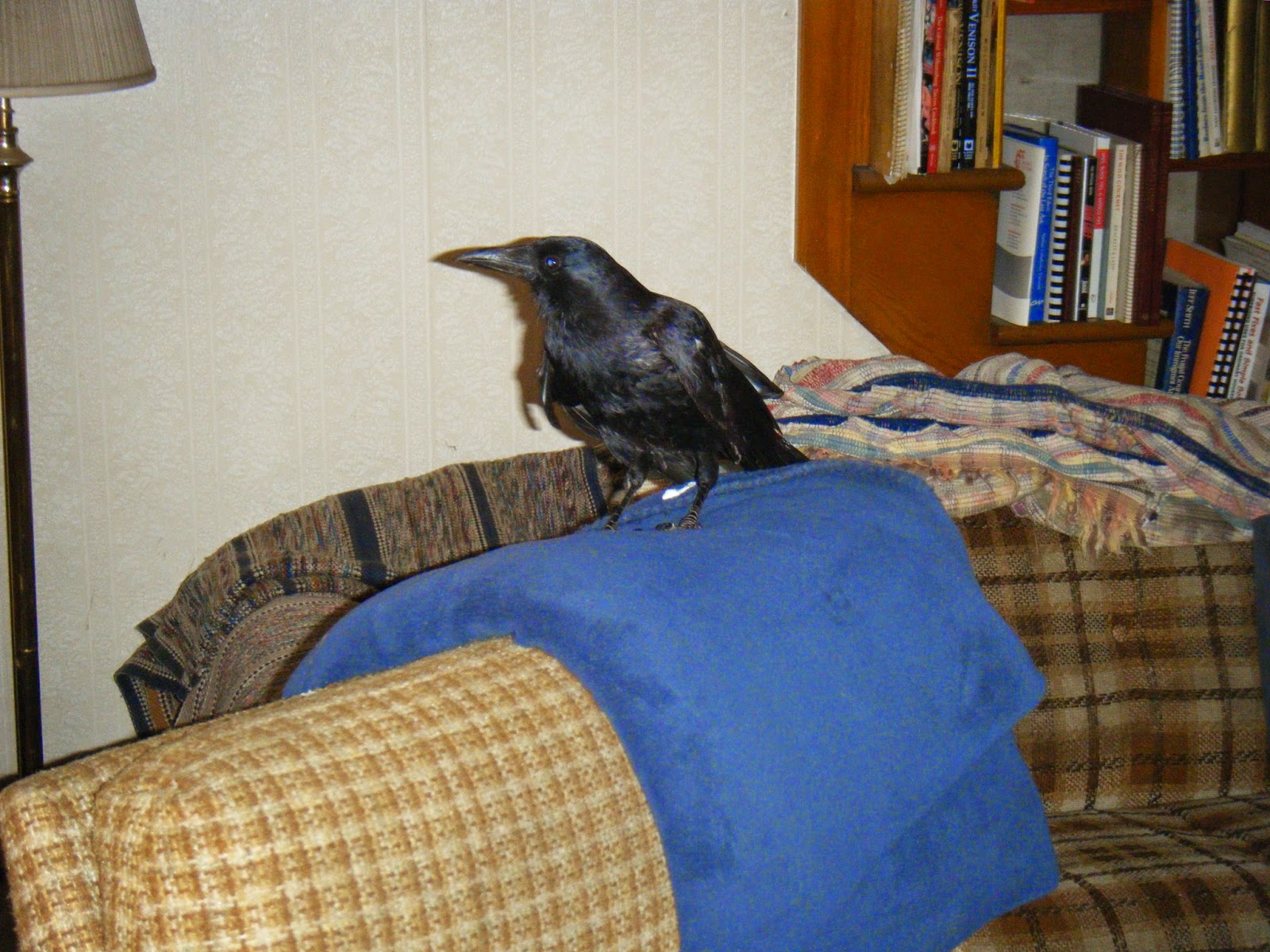 I needed a name for him and I went through a lot of them before I finally decided on Scare. Some rejects were, Midnight, Crow Diddley, Crow Bar, Crow Jackson, Crow Duke, and Poe. Ravens and Crows are NOT the same bird if you're wondering but it was strange that he actually watched a Baltimore Ravens game one time, he just kept staring at the TV. My dad said it was his favorite team. 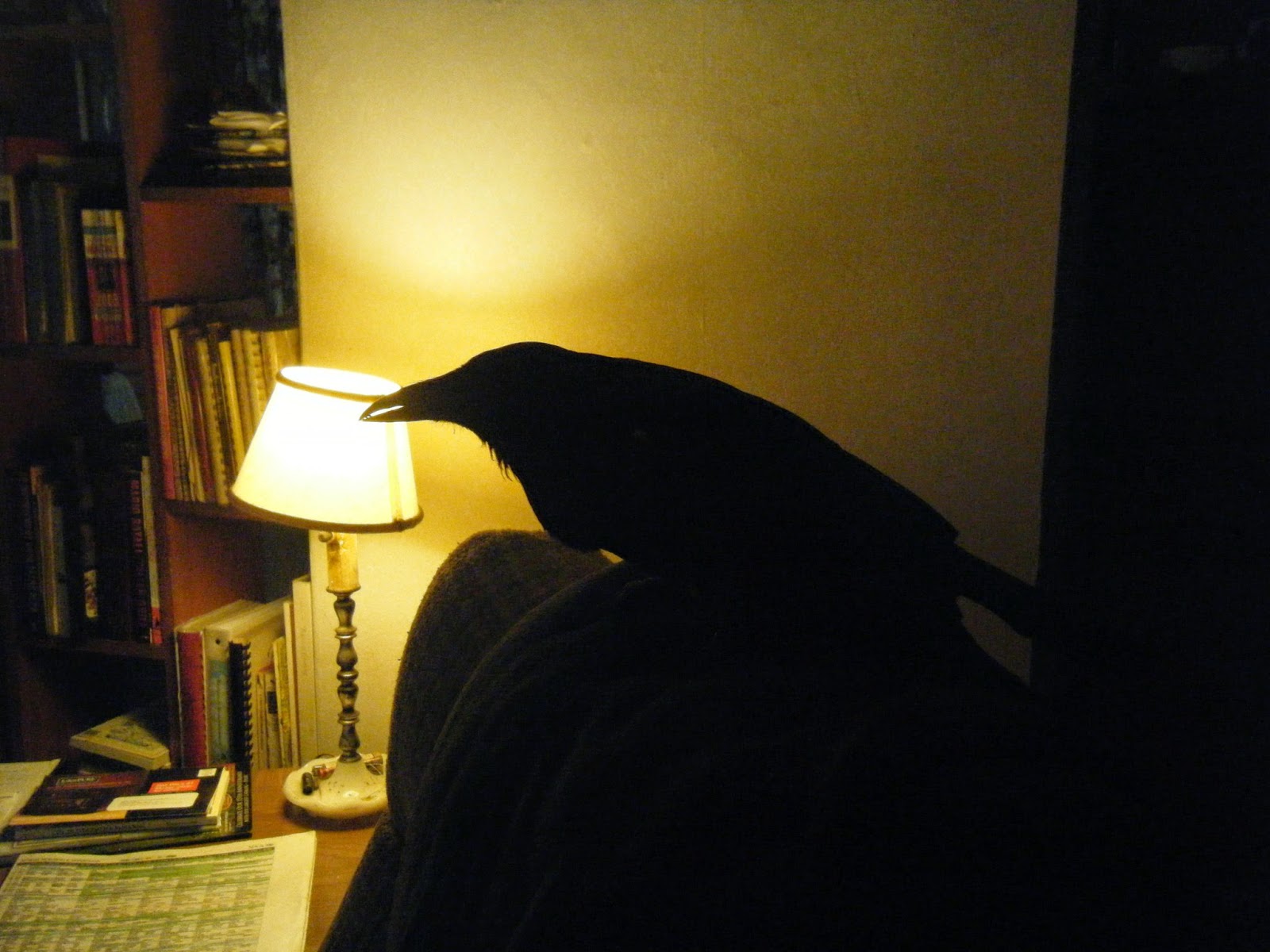 One idiot once told me that I didn't have a crow because, "Crows have yellow beaks and feet." Well, no they don't unless you're watching a racist Disney cartoon and this is where I assume she gained all of her scientific education. If she had been in first grade or even anything lower than college, I may have understood why she thought that. He was a crow for sure, complete with his black legs and black beak. 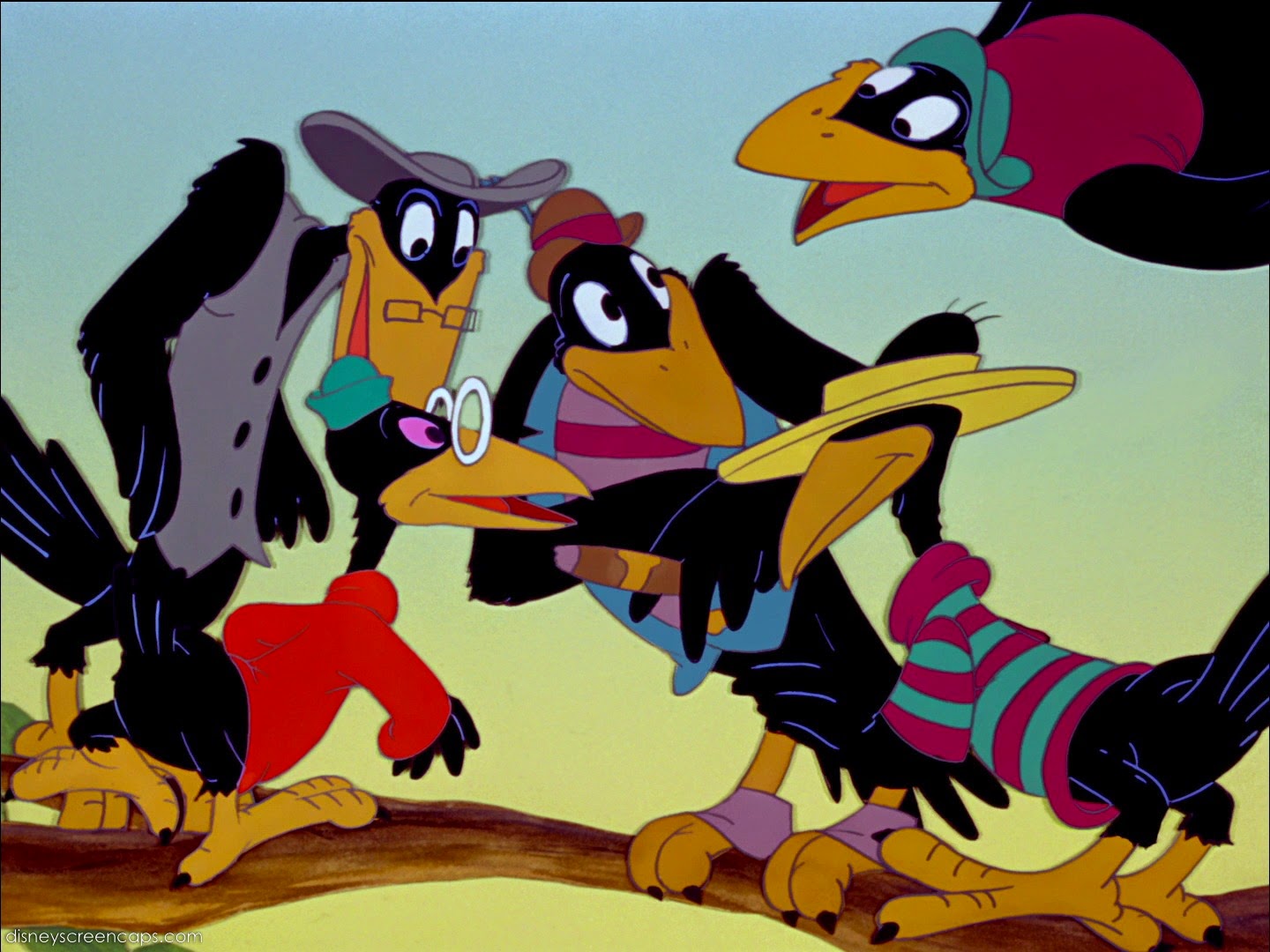 We fed Scare Crow a bunch of different foods. He lived in a large cage in the living room as his wing healed.  He never touched the Stuffed Cabbage we gave him which is odd because crows love garbage. His favorite food? Deer meat, and luckily we had plenty of that. It always amazed me how he would clean it to the bone, anything with bones actually he would strip clean better than any human or machine could do. That's nature for you I guess. He didn't like to eat in front of us though. Crows might be scavengers but Scare liked clean food and could be picky at times.

I showered with him too. I assumed birds liked bird baths so I thought he might enjoy the steam and splashing water from a shower. Instead of enjoying showers as I do, he just seemed so puzzled and curious about everything in the bathroom. He would get wet and then groom himself feather by feather. 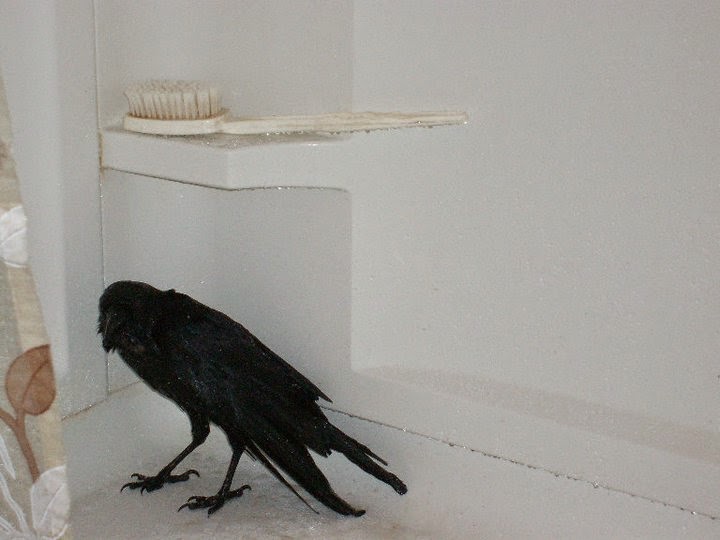 One time I saw a group of crows outside the house eating things from my dad's compost pile. I took Scare's cage outside and put it right by the compost pile and went back inside the house. I thought he might like some friends or something. Oddly enough Scare was cawing and jumping all over his cage but the other crows ignored him completely! They didn't look up as if he wasn't  even there. I'm not sure why and I've never been able to figure this out. I assume Scare was trying to tell them that he had been captured by the humans and was living with them and to free him. I guess they didn't want to get involved? 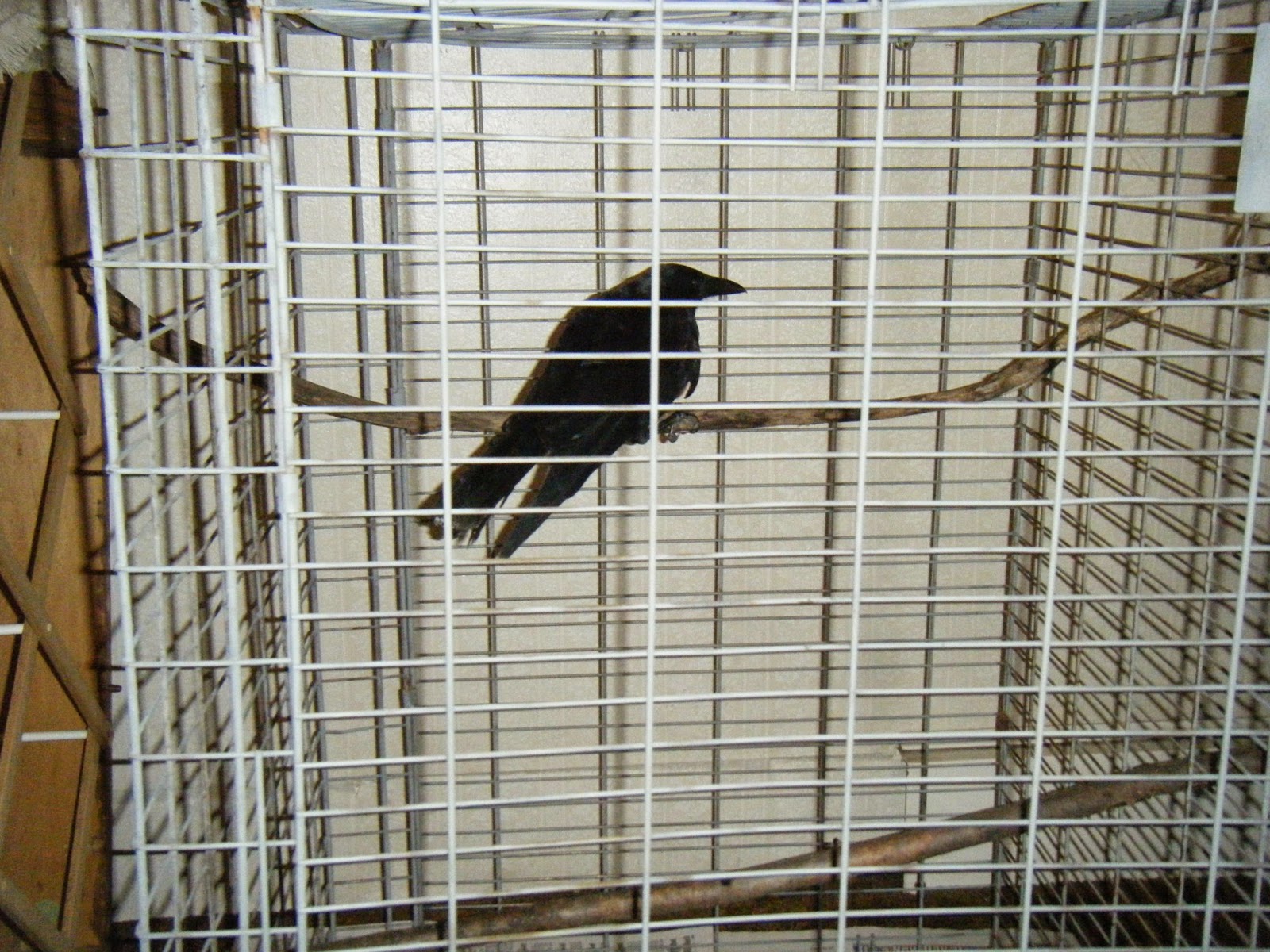 Eventually Scare became much more active and lively. He constantly hopped from branch to branch in his cage and would often flap his wings. It was at this point he even bit me. Crows have beaks like scissors, did you know that? I do now. I also realized that showering with him at this point was a stupid and possible terrible idea. 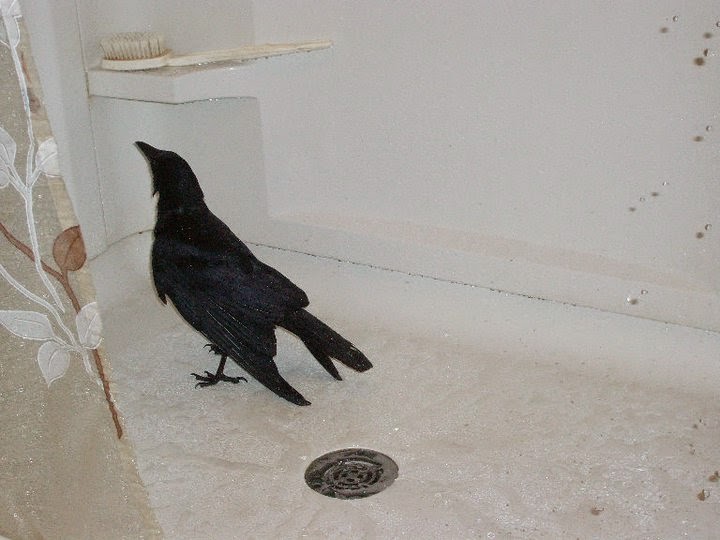 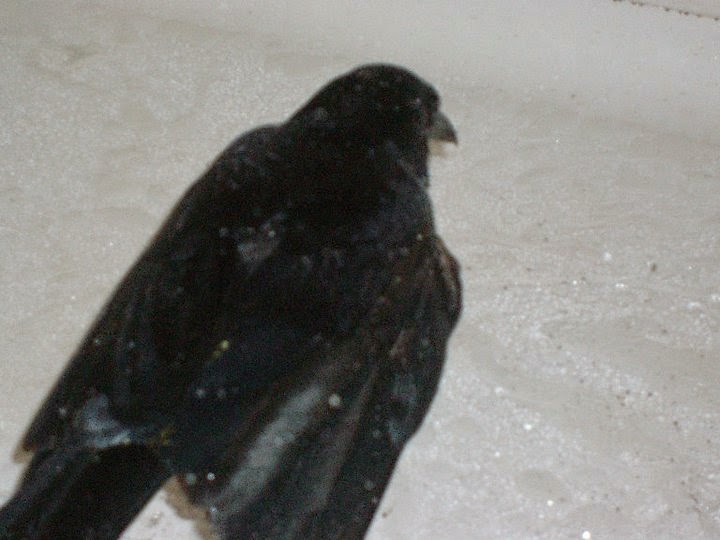 I knew it was time for my crow to be set free. He was born in the wild and it was where he belonged. Being labeled a house crow by the other crows just wasn't fair. With his wing being completely healed, he was taken outside and set free. He took to the sky and soared above the tree tops until he disappeared in the distance.

They say crows are the smartest birds there are and scientific tests have proven that. They say crows can remember a face and even avoid places where they were hurt or other crows have been killed and even more fascinating is that they, "tell" other crows and  teach their offspring about these things. Did I ever see Scare again? Not sure. Many crows have flown over the house or have been in nearby trees but if what they say about crows is true, I assume Scare avoided our house again and never wanted to come back. I often wonder if he tells the other crows about his time spent living with the strangest most curious creatures on earth. Crows can live to be 20 years old in the wild and in captivity the oldest crow was 59, so Scare could easily still be out there somewhere. 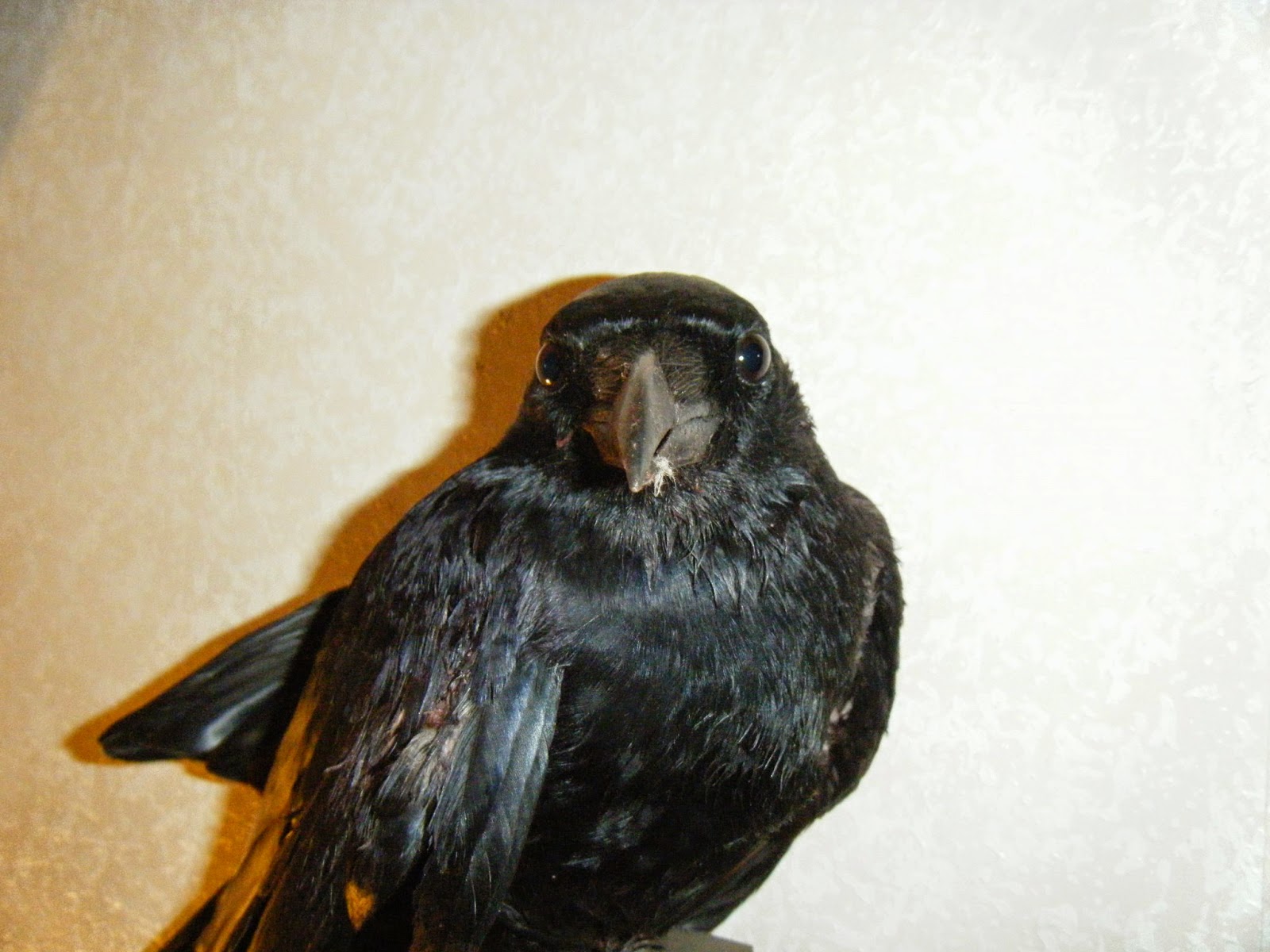 Sometimes outside my dad's house a crow will caw loudly at me right before it flies away, although that is not uncommon for your average crow to do, I can't help but wonder if one of them was  my Scare Crow saying, "Thank you for saving me, but I rather live free!"

Don't think Scare was very smart or would remember me? Check out these articles on crows and prepare to be fascinated!