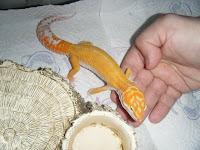 I thought I'd write an update on Flare, my newest leopard gecko.

I got Flare at the Cheswick Reptile Show in Pittsburgh back in January. So i've had him for about a month now. Flare is a, "sunglow" male leopard gecko. Sunglow, or hybino as its sometimes called, is the albino version of the Super Hypo Tangerine Carrot Tail leopard gecko. (Hypo meaning very few spots, Super meaning no spots, Tangerine being the orange color and carrot tail is when orange starts at the base of the tail and goes out onto the tail.)

I was told he was about 3-4 months old, i dont know how you dont know which, but either way hes around 5 months old now and he is huge for his age, there is good reason for this though. I was told he has the genes to be a giant. (Giant leopard geckos are 100-150 grams in weight.) His mother was huge and his father was big as well so i hope he is a giant because i did want one. His colors, as you can see, are amazing. I love the white underside and orange body. He has cute little white feet and i think the pink on his tail is such a cool color too. Believe it or not his brother was at the show and he cost more and was even more colorful than Flare is, but he was also older. The breeder told me Flare was going to only get brighter as he grows up.

I plan to breed Flare to my unnamed female Super Hypo Tangerine Carrot tail later in the spring. Did i mention Flare is het RAPTOR? (RAPTOR is Red eyed, Albino, Patternless, Tangerine, ORange.) So together they can produce some pretty cool babies, and IF Flare turns out to be giant then the babies will carry the giant genes as well. So i will keep you all updated on this new leo of mine!
Posted by Andrew at 2/17/2009 04:49:00 PM