A Trader Joe's cheese?? Nothing says classy like a kiss-ass in a Hawaiian shirt but to my surprise, the Trader Joe's store has a very large and interesting cheese selection. They are known for their low prices but when it came to cheese I found they were pretty comparable to everyone else. Of course I've had cheddar before but never CANADIAN cheddar. For years I have been wanting to wrap my taste buds around some real Canadian Cheddar, so when I saw an extra sharp block staring back at me from their cheese shelf, I couldn't pass it up. I believe it was Muffy, the mouse puppet from the 80's kid TV show, Today's Special, who said, "Oh nothing could be better, than a hunk of Canadian cheddar." I have always wondered if that was true. 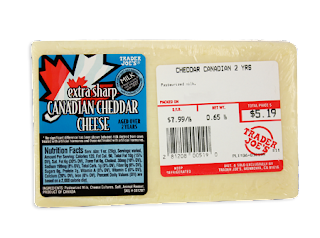 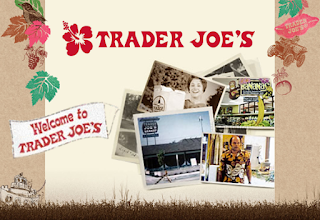 This cheese comes in a rectangular block that isn't very thick. It was just over half a pound and the price for that wasn't too bad. They price it by weight so you can look around and find one a bit cheaper that looks as big as the rest. It says right on the label that this has been aged for over 2 years! That makes this cheese seriously sharp, which is exactly what I like! Many cheeses say they are sharp but I don't take that term as lightly as some of the huge manufacturers out there, let alone what they consider extra sharp cheese. If it doesn't make your mouth pucker, it ain't extra sharp. It is under the Trader Joe's name, so it is difficult to say who actually makes this and where it actually comes from, other than Canada.

Taste
At first bite this cheese truly holds up to its label of being, "extra sharp." It has that wonderful tangy zing that makes a wonderful extra sharp cheese. This was clearly a cheddar and although the Canadians didn't invent cheddar cheese, they love to flaunt their excellence in perfecting it. I have to say, all the great things I've heard about Canadian cheddar were realized as I couldn't put the cheese knife down. As sharp as this cheese was, and was supposed to be, it was still rather creamy and soft. I expected a crumbly, drier cheese, which happens a lot with cheese that is aged that long but not this stuff! There were also no protein crystals, again, which I found to be odd, yet welcomed. For those of you that love extra sharp cheese but find the protein crystals to be annoying, congratulations, you found a perfect cheese!

All in all I found my first experience in Canadian cheddar to be a delightful one. I will say it isn't the BEST extra sharp cheddar cheese I've ever had, (I still think Cabot Vintage Choice Extra Sharp is still the best.) But I will say this is a great cheese for the price and convenience, as there are many Trader Joe's around. I give this cheese an 8 out of 10 just because it has a strange after taste that reminds me of plastic, I am wondering if it isn't due to the Trader Joe's packaging? I recommend this cheese for lovers of extra sharp cheddar, you won't be sorry if you go with this cheese.

It took me 28 years to find out for myself but I guess it is true what puppets sing about and I have to agree... nothing could be better, than a hunk of Canadian cheddar ...but that's just my two cents. 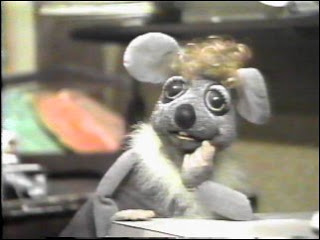 Cheese Fact: We all know cheese comes from cows milk or the occasional goat and even sheep. But did you know that some cheese is made from buffalo's milk and the even more rare, moose milk???

YES, I purchased my first TJ's Canadian Cheddar yesterday, and I had pretty much the same pleasant reaction! I have been searching many years, for an extra sharp, comparable to the extremely sharp A&P cheddar of the old days, and this one is close. I learned something, that those little tasty grits in an extra sharp are protein crystals! I actually enjoy those, and the bar of cheddar I got, did have some, but not as many as I'd like. Still searching for the extra sharp that feels like it's cutting the roof of my mouth, like the old A&P, but so far, this is a close second!