HOW TO TRANSPLANT AN ORCHID You got a Phal Orchid from the store and it isn’t doing too good, so now what? If this sounds like you then your best bet might be to repot your flower. If it is in a tight little pot with moss, then you should replant it in a better medium because odds are, that is why it isn't doing well. I will show you the steps for re-potting an orchid. STEP ONE.
Make sure the plant is done flowering. Re-potting while it is flowering will cause too much stress and the flowers it does have will probably wilt and fall off. Besides, being in a new pot the orchid will want to concentrate on its root system and having flowers in bloom takes too much energy to grow new roots, again, causing too much stress on the orchid.


Here’s a little manager’s special, possibly marked down because of the damage to the leaves. These leaves were also bright green when I first got it but a lot of sunlight and more water helped to nurse it back to health. It lost its flowers but most of them were already wilted or gone when I got it. The roots were growing like crazy! See how they came out of the bottom of the container? This happens to be a good container for orchids. These slits and holes help air get in and circulate through the root system. The bad part is that this little guy was planted in moss and the damp tight conditions are strangling and breaking the roots while they sit in a soggy wet mess causing root rot. A great pot with a terrible medium. Let's give it some balance with a great medium. First remove any flower spike stick you may have. This particular flower has a great flower spike and a stick like this helps it stay straight up and down. Gently pull the stick out after you remove any clips or wire. It should come out easily without damaging any of the roots. The next thing I will do is pull the entire root ball out of the container which will be easy enough but you’re going to lose some of the roots that are growing out of the bottom. There is just no way to get them through. Luckily this plant has a very healthy root system. IF your orchid has very few roots or very damaged and weak roots, be as careful as you can to preserve the ones it has.

STEP TWO.
Now that it is out you will notice how tightly packed in all the roots are with the moss. Literally nothing fell off or out when I pulled it out. Orchid roots are stiff and they don’t bend, they break. Being weak because of the tight moss didn't help matters. I pulled out the moss little by little until I got all of it out. I also ran it under water to wash the roots off.
See how much room the moss was taking up? Many of the roots on the inside were white because they had been too damp for too long. When moss is wet it expands and holds moisture, often getting wrapped around an orchid's roots but when it dries out, it tightens and contracts, strangling your orchid's roots. STEP THREE.
You’ll want to add the new medium. I highly recommend this brand, it's called Better Gro Phalaenopsis Mix. I have been VERY happy with the results and I doubt I’ll ever use anything else. I had to put most of this bark inside the roots before I put it back into the cup. With the size of these roots this plant could have actually used a slightly larger container but orchids do like their roots to be tight unlike most other plants. Make sure your stick is in deep and good enough to hold up the flower spike. This spike wasn’t heavy because it had no flowers on it. This is a good time to trim back an old flower spike but I kept this one because it’s the perfect shape for when this little guy starts to bloom again. NOTE: A problem with buying a flower from a store is that you have no idea how old the flower spike is and how many times it has had flowers on it. In time you’ll need to trim it back and let a new flower spike grow. I felt this one might have some more blooms in the future so I’m leaving it for now. 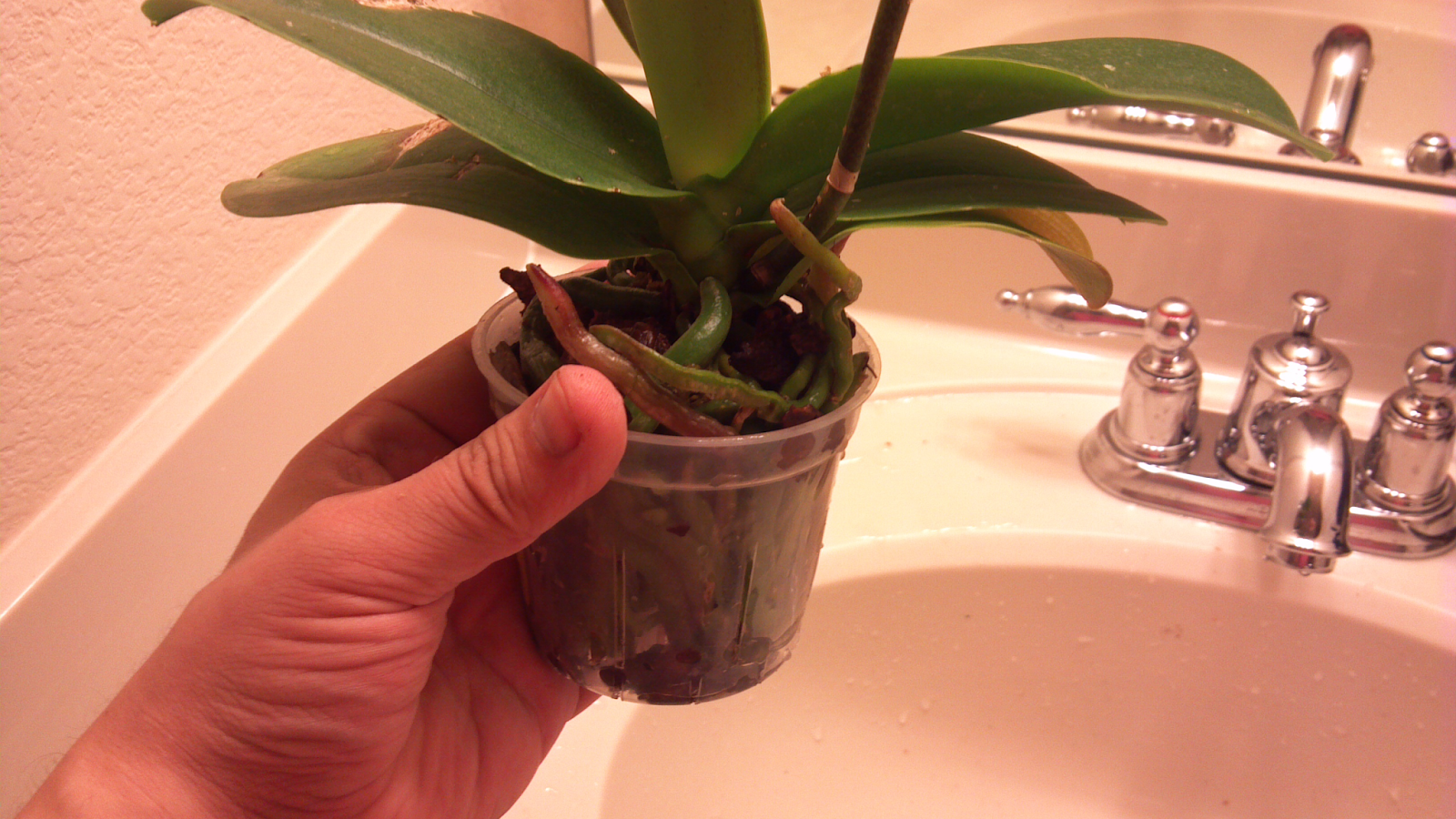 Well there is this little Manager’s Special in the same container but with a new bark medium and a lot of its dead damaged roots clipped!  It looks like it could STILL use a bigger container but there is a lot more room in there without the moss and dead roots. It was an easy process and like my other little rescues, I’m sure this one will be thriving in no time!

Remember, a plant will tell you exactly what it needs….you just have to know how to listen.

Thank you so much for this. We Want to try again.