BIGFOOT THROUGHOUT HISTORY, BIGFOOT INVENTS THE GAME OF BASEBALL

Personal notes from the diary of Abner Doubleday on his death bed recall his attempts at making the game we know and love, baseball. He clearly depicts Bigfoot as a key component in the making of our national past time! 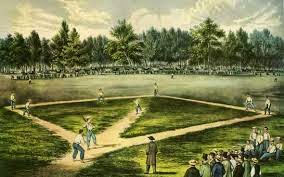 I must clear up my past. People are calling my invention of baseball a myth and that there is proof that people were playing baseball before, this is a lie. I, Abner Doubleday, invented the game but alas, I cannot take full credit for the sport as I had much help from a dear friend. My friend is an old army buddy from my civil war days. We fought along side each other in Gettysburg. Before Bigfoot became my commanding officer, he was my close friend. Although tall, hairy, and a smell so bad you could actually see it, he was a terrible athlete.

As I fade away in my final days I shall recall how baseball came to be. I was playing cricket with my school yard chums one sunny afternoon in 1839. A strange, ugly, hairy, dimwitted, kid approached us and wanted to play. We said yes because we knew he would be so bad at this game it would make us feel better about ourselves. I remember Bigfoot, as he called himself, did everything wrong. He held the bat wrong, he stood wrong, he yelled obscenities at the other players when it wasn't his turn. He chewed tobacco and spit and scratched his private parts, yes, he did nothing right when it came to the game of cricket.

Bigfoot never won a game of cricket in his life. He argued non-stop and tried to make up rules as he went. One of those days he became so mad at the bowler, what we now refer to as a pitcher, that he actually wanted to physically hurt him. He held his bat wrong and swung at the ball purposely trying to hit it back to the bowler in an attempt to kill him. The ball flew high in the air and over our heads. Bigfoot laughed and told us to go fetch our stupid ball if we wanted it so badly. Enraged, I ran after the ball and threw it back to a teammate so he could throw it at Bigfoot. Bigfoot ran around the field and put his foot on a rock and yelled that he was "on base" which means we couldn't hurt him. We threw the ball at him and it hit him in the face, we laughed and said he was out. Bigfoot cried a little but still said he could never be out if he was on a base.

I fear this will be my last entry for I can no longer hold on to my life. I must clear up any baseball confusion before I pass on. Bigfoot continued to play his game his way. He always seemed to find another rock or stump as he ran from us so he could yell out, "I'm on base, can't get me!" As the gentlemen we were, we honored these, "bases" but never liked them. We compromised on having only 3 bases. Soon other players started to use Bigfoot's tricks and before we knew it, we were all playing by Bigfoot's rules. Bigfoot claimed we were no longer playing cricket but a brand new game. We pointed out that baseball was clearly just cricket rearranged so it would be easier. Bigfoot then pointed out that baseball was also longer, more boring, less practical, and more confusing than cricket could ever hope to be.

I remember that we decided on the name of, "baseball," unanimously after Bigfoot told us all of his suggestions. He wanted to call the game, "Bigfoot's Balls," because everyone was throwing balls at him during the game but we dismissed this name. He then suggested we call it, "Batball," because of the bats he carried with him around the bases to defend himself from our attacks. We did almost agree on "Super-Cricket" but in the end agreed that the bases of the game were the most important part. And THAT is how baseball was actually invented, not by me but by Bigfoot in Cooperstown New York. I can rest in peace now having admitted the truth.