A newly discovered testimony from the people that actually made the Liberty Bell is proof that Bigfoot is real AND that he had a hand in making the historic symbol of freedom! 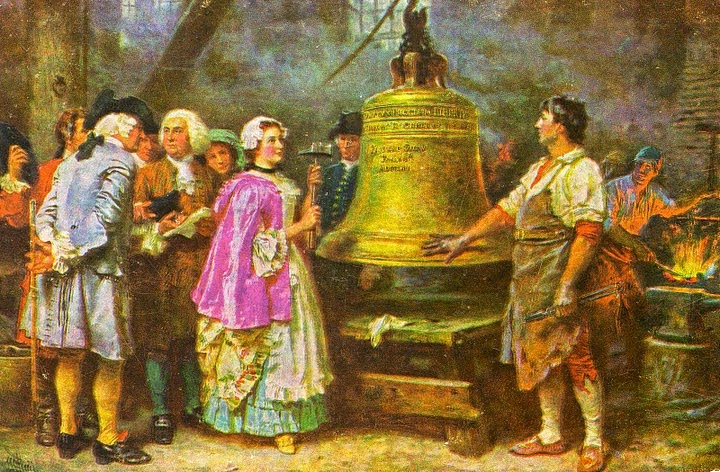 I, John Pass, have decided to keep a diary log for our new business. My two partners and I have been put in charge of the new bell sent here from England that is to be placed in the tower of Independence Hall. John Stow is my original partner but we have a third partner of mysterious origin. He isn't normal. He calls himself Bigfoot and claimed to be the best founder in all of America, therefore we asked him to join our duo and local founder business. He is very hairy and smells terrible. His smell could knock a buzzard off a shit wagon. The bell arrives tomorrow and we will have it ready for the newly built tower!

Disaster strikes. The massive bell has arrived. Bigfoot said he could carry it himself although it weighs 2,800 pounds. Bigfoot promptly dropped the bell and it cracked. John and I were infuriated with that moron but Bigfoot insisted it was just a cheap foreign bell and most every bell has a crack in it. Terrified, we quickly tried to come up with an excuse to recast the bell. Bigfoot suggests we tell the people we need an American cast bell that can now represent our struggle for freedom. This was just the recasting excuse as Bigfoot said America will of course never actually be free and he added that he sees nothing wrong with tyranny.

Bigfoot began the recasting process for what he is calling, "The Bigfoot Bell of Awesomeness." John Stow and I are in agreement that that name is ridiculously idiotic. Bigfoot told us our wives said it was a good name as he fornicated with them last night. Bigfoot claims he can save us money by adding pewter instead of using tin. Tin is what John Stow and I planned to use, as THAT is what goes into making a bell. We hope Bigfoot knows what he is doing.

The bell is complete. John Stow and I wanted our names to appear on the bell, as it was said, we would be given that honor for being the ones commissioned to work on the bell. Instead, the bell now reads, "Made by Bigfoot, and nobody else helped me, not even a little bit." As John and I recall, we did all the work and Bigfoot sat around and watched us, saying it was his superior vision that was needed for the hard labor, not his strength or diligence. For this reason he has been calling himself our, "super-visor." As far as we can tell, a supervisor is just an unnecessary person that sits around on their ass all day telling other people how to do their jobs.

Bigfoot is giving the Bell of Liberty, as I wish to call it, a rigorous test of endurance. Bigfoot turned the bell upside down and took it to the top of a big hill. He then rode down in it. Bigfoot hit the bell numerous times with a hammer to see if he could crack it. We were impressed when the bell stood strong but I swear I think it angered Bigfoot that he could not break it. He tied the bell to some draft plow horses and dragged it through the streets of Philadelphia. This eventually caused the bell to crack and Bigfoot acted mad at it and said he didn't want a cheaply made bell that would crack only after a few hours of being dragged around a colonial city by a few horses and a drunk guy.

We recast the bell. Bigfoot took a spoonful of the molten metal and pretended to taste it and said it needed salt, no one laughed at this joke. John Stow told him he wasn't man enough to actually drink the melted metal. Bigfoot declared he was and took a gulp. He then screamed in horrible pain and ran around the foundry clutching his throat. John Stow laughed at this and said maybe it needed salt.

Bigfoot struck the bell over 200 times today with a log determined to test its durability. He then threw rocks at it for over an hour. Yet again the bell cracked and Bigfoot said he gives up trying to make a dependable bell. He also renamed our foundry to "Dependa-Bell Foundry" we did not agree on this name change and it contradicts all that we do. I pointed this out to Bigfoot and he told me that he would, "ring my bell."

We have delivered the bell to Independence Hall, crack and all. We were told we would not be paid for the bell we delivered since it was broken. Bigfoot is marketing the cracked bell as something people should want. He says it gives the bell character. He is dubbing it, "Bigfoot's Crack." I have warned the people not to ring the bell too much as it is already cracked and will break completely in time. The bell we produced was below their standards, as a result we were told we would never work in this town again.