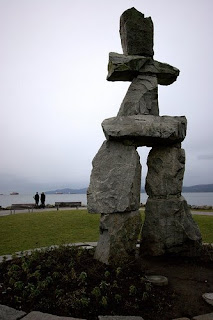 Inukshuk, not sure how that is pronounced but i believe its, (in-ook-shuck). This is an Inuit word meaning "in the image of a man." Inuit is what many people would call an Eskimo, but they don't really like that term. These are stacked rocks to look like a person, but very general. The 2010 Olympic games in Canada are going to use an inukshuk as their symbol. People think they were landmarks because on the tundra there aren't many. Others believe they were used for direction, an early road sign i guess you could say. Some say they were for a food cache. Although it is unknown they still stand today and many artists are making them on a much smaller scale for the sake of art.
As an Alaskan i felt like more people should learn about these stone men so on Tuesday i decided to go and make some along fourwheeler paths. I assumed some punk kids would drive by, see them, and get off to kick them over but either way i wanted to do it. These things are hard to make! They look simple and for the most part are, but rocks are heavy and stacking isnt easy when the rocks arent flat. Needless to say i finally erected one. It probably fell over by now but i know for a fact two other people got to see it before it did....perhaps its still there? I wanted to make a bunch of them at different points in hopes that maybe someday they would be considered landmarks like their northern giant cousins of the Arctic. While transporting some big rocks i went down a hill and they rolled off the back of the fourwheeler and into my legs, it hurt like hell and i gave up. But not on the idea! I will make more sometime, better ones, bigger ones, i may even add some concrete so they cant fall apart.
Posted by Andrew at 8/28/2008 11:07:00 PM