I already did a blog on my all time favorite cars from movies and TV but there are still so many good ones out there that I thought I'd continue with the next ten as if my list were made up of 20 cars.

So here is a countdown from 20 to 11 of my favorite TV and Movie cars! If you missed the first blog where I counted down my top 10 favorite movie/TV cars, here is a link to it......
http://andrew-mytwocents.blogspot.com/2012/09/andrews-top-ten-tvmovie-cars-of-all-time.html

This was a great movie about a professional driver that would do anything for the right amount of money and his vehicle of choice was the BMW 735i. (The car they used in most scenes was actually a 750 with a V12 but in the movie they say its a 735i)  The transporter got himself into trouble and used this awesome car as his get away. Jason Statham is a kick-ass kind of guy and he needs a kick-ass kind of car, and this one really fit the bill. Refined and elegant but with power and speed, a really good combination for this character's ride. 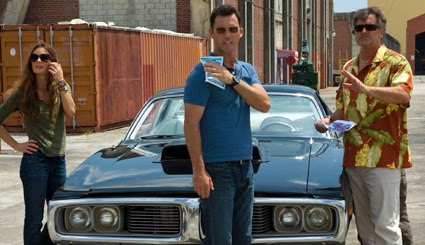 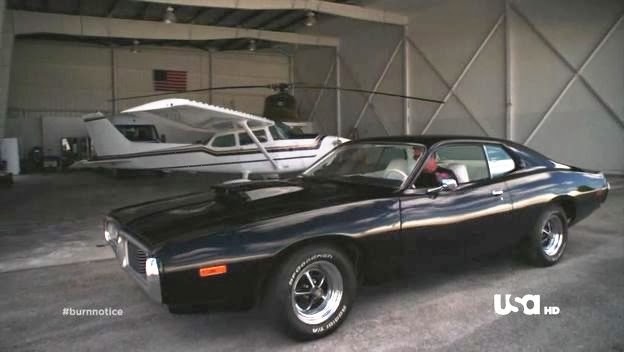 "Burn Notice" on the USA network is an Ok show but has an awesome car, a 1973 Dodge Charger. It may be a 1974 Dodge Charger, no one seems to know, the two years are extremely similar and I own a black 1974, which is why I was drawn to this show. I really only watch the show for the Charger and it's true that the last generation of the muscle car era Chargers get little respect, so it was surprising, yet refreshing to see one featured on a TV show. In my opinion this show should have had more scenes with the Charger. 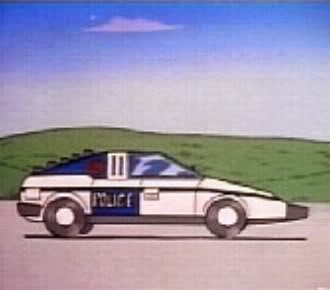 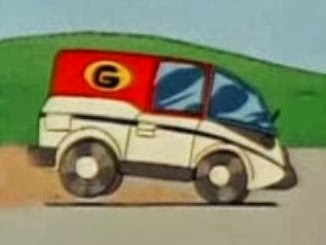 18.  THE GADGETMOBILE FROM INSPECTOR GADGET

"Inspector Gadget" was one of my favorite cartoons as a kid and I always loved his Gadgetmobile. Unlike other cars or vehicles, the Gadgetmobile was really two cars in one. It was usually a van-type thing that he would drive around in, just to get from point A to point B. When Inspector Gadget needed to get somewhere fast or just wanted to be cooler, his van would transform into a speedy police vehicle, a pretty ingenious idea for the show considering Inspector Gadget himself was full of gadgets and useful little robotic parts. Just watch the opening sequence to Inspector Gadget and you'll see the Gadgetmobile transform. 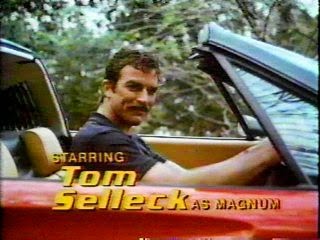 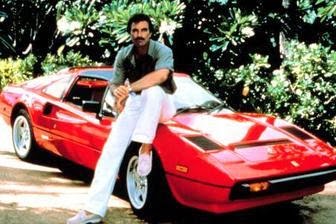 Magnum was a private investigator that lived in Hawaii and got to stay in a mansion for free and drive around an awesome Ferrari whenever he wanted. He didn't own the car or the house but that was part of the deal for his job....what a life.  I liked this show growing up but the part that always had me glued to the TV screen was during the opening credits when Magnum could be seen peeling out in his awesome red Ferrari and speeding all over Hawaii. It was the perfect car for this setting and this character and being the number one show on television, (an impressive feat considering it was the show that replaced Miami Vice), I'm sure it was a help to boost Ferrari sales here in the US. 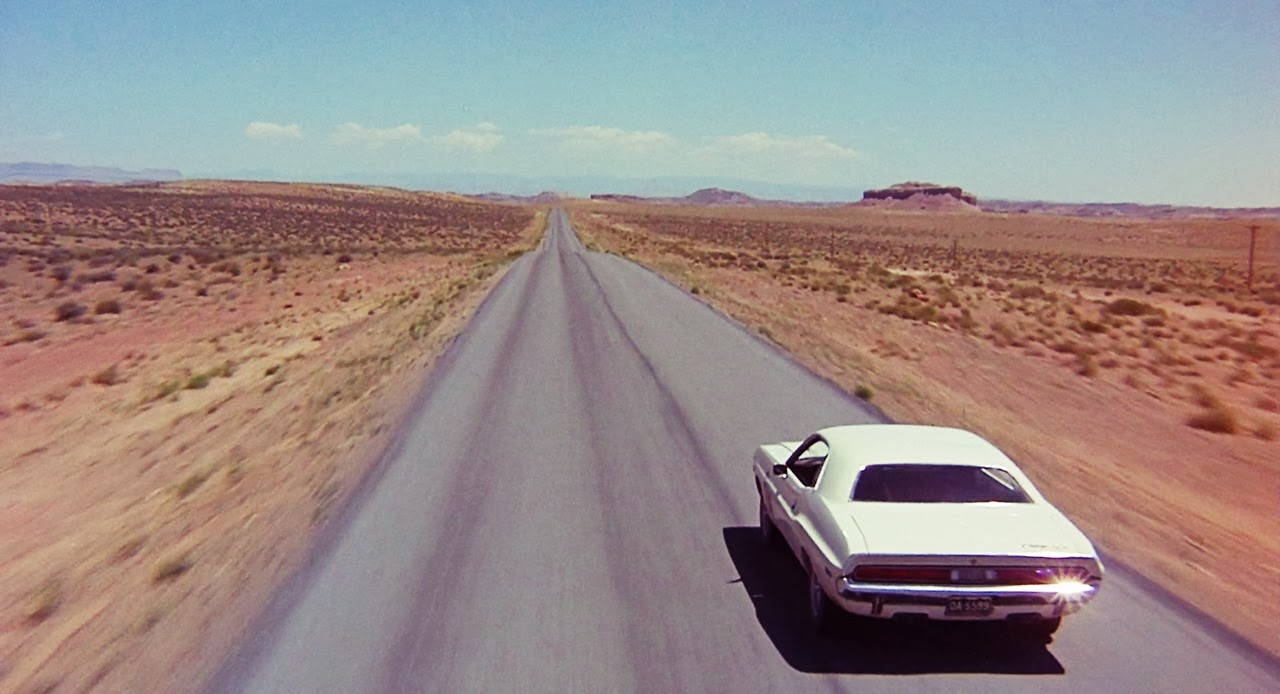 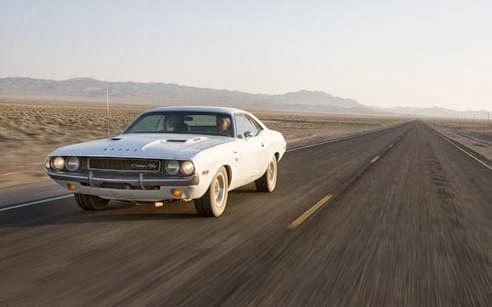 Being paid to deliver a Dodge Challenger would be a pretty cool job and that's what Kowalski gets to do in the movie, "Vanishing Point." As usual the "man" won't let people have a good time and soon Kowalski finds himself in a cross country man-hunt car chase, the only problem is, that the police didn't count on chasing a man with nothing left to live for. There are some GREAT scenes of the Challenger racing across desert highways in this movie. I really suggest this movie for car lovers but especially for MOPAR lovers. Also I find white to be a very boring color for a car but honestly it really was a wonderful choice for this car in this movie. 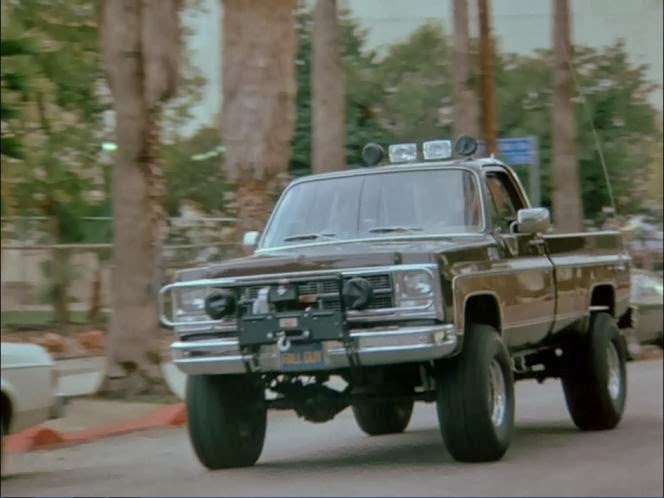 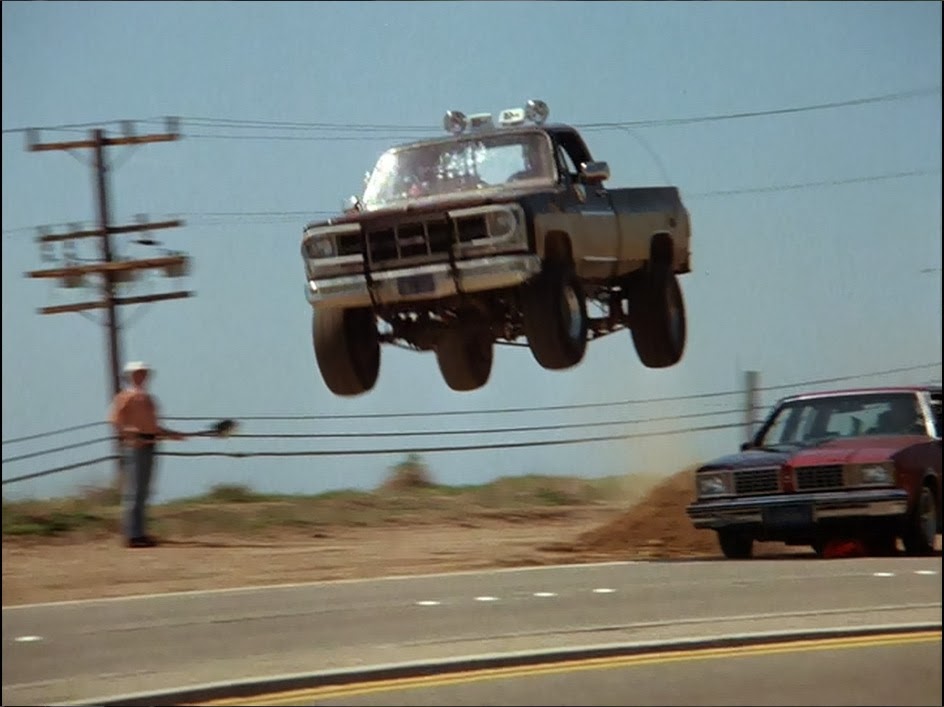 "The Fall Guy," a very underrated  and almost forgotten show. I loved this show. Lee Majors plays a Hollywood stunt man that always seems to end up having to help solve a crime. He had an awesome truck and it stood out to me as a kid because I liked cars much more than trucks but this one ALWAYS got my attention. It was loud, had huge wheels, and a lot of cool features besides that he was always jumping stuff with it. Trucks didn't always get a lot of recognition in the 80's but this truck deserves some credit for being such an awesome ride. 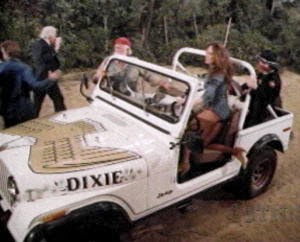 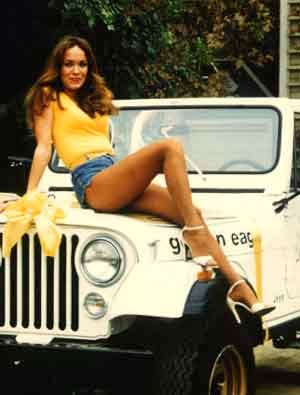 The Duke boys had the General Lee and Daisy had a jeep named Dixie, and why not? After all, Bo and Luke wrecked Daisy's first car, a Plymouth Roadrunner and she was given a white Golden Eagle edition Jeep CJ-7 named "Dixie" as a gift. Daisy tore up the roads of Hazzard county in her white Jeep as she fought the law and corrupted local government. I love Jeeps, they are so unique but for years I always thought of Jeeps as a girl's car just because I always associated them with Daisy Duke. Clearly Jeeps aren't just for girls but Daisy's Jeep fit her as perfect as her Daisy Dukes. 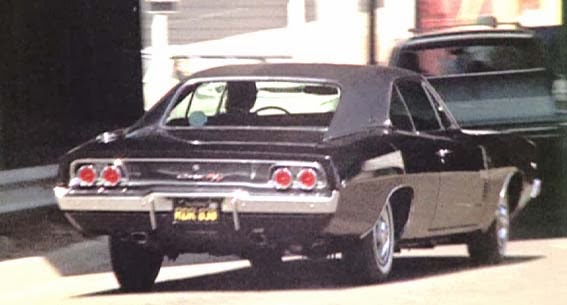 Bullitt isn't that good of a movie to be honest with you but it is totally worth watching just for the chase scene that is regarded as one of the best in any movie ever made. No special effects either, that's what impressed me about the chase scene. 1968 was the first year for the second generation Chargers and this movie showed the world what they could do. The Dodge Charger is actually the bad guy's car, which is cool because it made me route for the bad guys. This car is big, it's black, it's bad, and when it peels out to start off that chase scene the audience knows they are in for the ride of their lives! 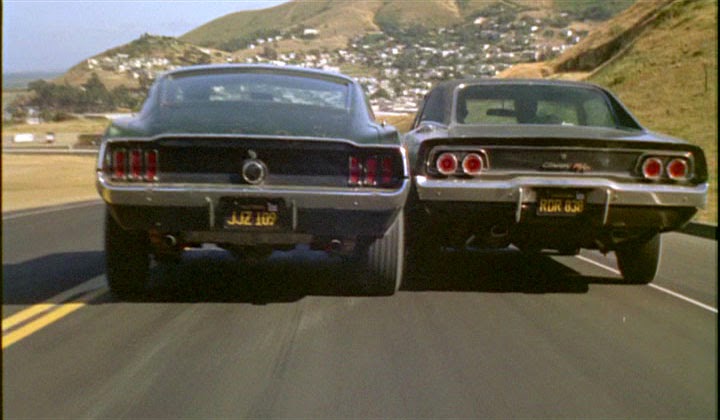 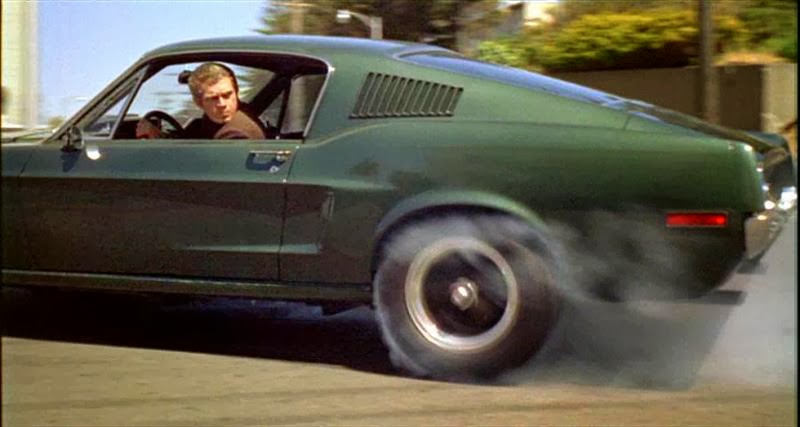 Steve McQueen as Bullitt wouldn't have been able to chase the bad guys without an amazing machine but luckily he had his 1968 Ford Mustang Fastback. Bullitt may have been a cop but this was no ordinary cop car. This really is the only model of Mustang that I like and I think it's because of this movie. Do the wheels look familiar to you? That style, black centers and aluminum/steel rings outside, is really popular right now and I personally LOVE those wheels but I've loved them for years because they were on this Mustang. Although this Mustang had trouble keeping up with it's Hemi powered adversary, it didn't stop me from really enjoying watching it fly through the streets of San Francisco. 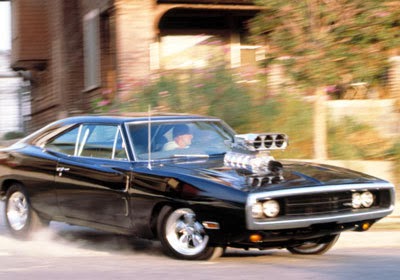 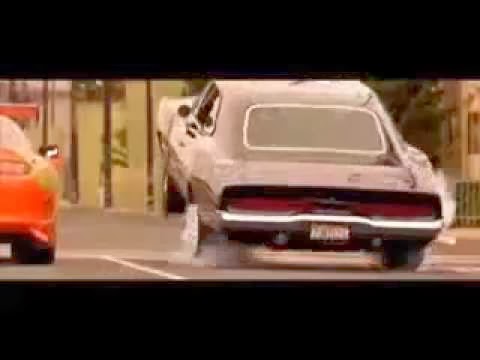 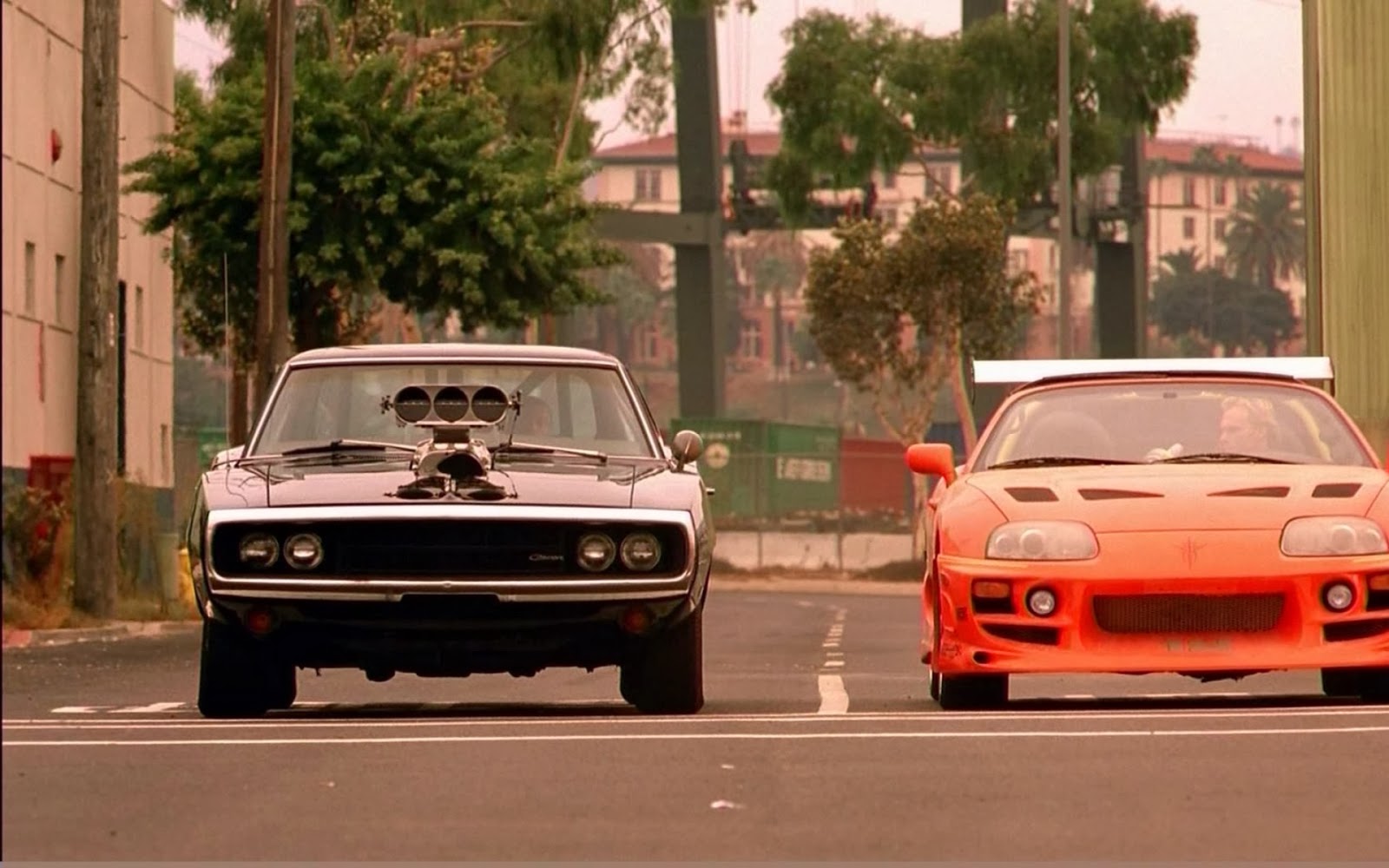 900 horses of Detroit muscle. Dom and his dad built her. She ran 9 seconds flat in the quarter mile, so much torque that the chassis twisted coming off the line, it's a beast. Or so we were told about Dom's blown 1970 Dodge Charger from the first The Fast and the Furious movie. One of the best scenes in any moive, (in my opinion anyway) Dom says when the light turns green, he's going for it, then this Charger rears up when Dom hits the gas and rides a wheelie before it roars through a quarter mile that ends inches away from a train wreck. Although destroyed at the end of the movie, the Charger is supposedly fixed and brought back for a few of the sequels. The sequels got bigger and more unbelievable as the years passed but I still think the first one is by far the best and it's mainly in part due to this Charger. It came out the year I got my 1974 Dodge Charger and made me decide that the color black was definitely the right choice for me. When I saw the previews for this movie they always showed the Charger and I knew I would be seeing it the second it came out. Great movie, great car, great scenes but waiting to the very end to break out the Charger was just painful for me.