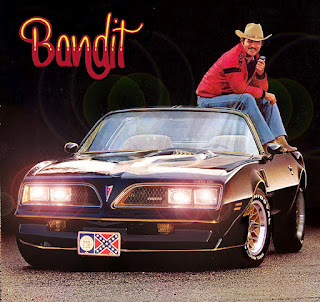 10. The 1977 Pontiac Trans Am from Smokey and the Bandit
Coming in at number 10 is a car that made an average movie pretty good. In the movie "Smokey and the Bandit" Burt Reynolds title character drives a 1977 Pontiac Trans Am and honestly the car has a lot of good scenes including jumps, slides, peel outs, and high speed chases. There were two more movies which the Trans Am made more appearances but it was never the same exact car and even in the second movie it is explained that the Bandit loses his car and Sally Field and then goes into major depression. (I'm pretty sure losing the car was more depressing than losing Sally Field.) So why number 10? In an era where the muscle car was pronounced dead, the Trans Am showed America that there was still some muscle out there.

Now seriously how can you not love Herbie the Love Bug??? The volkswagen Beetle, (until very recently) was the most sold automobile in the entire world, and Herbie is the most recognizable one. This 1963 VW Bug was an idea of Walt Disney that spanned 6 movies. I always liked Herbie, he had a mind of his own and a personality that was full of charm and well....love! I was very happy to see Herbie make a come back in 05 and continue to wonder why more of these wholesome fun family adventures are not being made??? 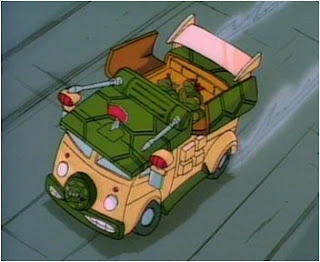 Although it didn't show up in any of the Ninja Turtle movies, the Party Wagon was the main choice of transportation for the Teenage Mutant Ninja Turtles. Loaded with a lot of goodies to help them fight bad guys, the turtles often used this van in the cartoon series. The other cool thing about the Party Wagon was that it was a toy too and you could use it for the action figures. You wouldn't think teenagers that lived in a sewer would need a car, but apparently they did. 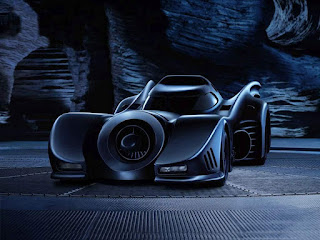 How on earth can Batman's Batmobile be soooo low on my list??? Easy, there were many different Batmobiles over the years and believe it or not, the most popular one was the original 1960's Batmobile, I however, think the best and by far coolest Batmobile comes from the 1989 Batman movie starring Michael Keaton and Jack Nicholson. I don't care for the 1960's version, (the only version made from an actual car) and I really think the newest Batmobile is just plain hideous. BUT it is the Batmobile and Batman was always my favorite super hero. Still, that 1989 Batmobile was something so unique and bad-ass looking that I think it still remains a superior Batmobile. Also the name "Batmobile" is just really awesome in itself. 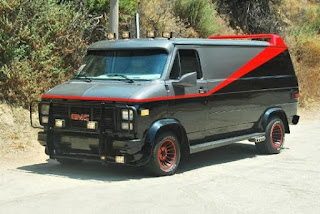 The A-Team is one of my all time favorite shows, and their Van has to be the coolest van of all time. The 1986 GMC Vandura used by the team seems like an odd choice for an action show but it made perfect sense. The van concealed the team from the Government and law enforcement, plus they could haul around everybody and still have enough room for all the guns and explosives they used in each episode. Then they would slide open the door and start shooting people as Mr.T drove them around. Not to mention the van was supposed to be owned by Mr.T's character B.A. Baracus, and Mr.T could make ANYTHING bad-ass, including a van. Mr.T would often comment about the condition of his van and protected it by warning anyone else who drove it that he would pity the fool that put a scratch on his baby. A common misconception of the Van was that it was all black, although it often appeared to be, it was in fact black and metallic grey separated by a red stripe. A detail that is missed by some replicas.

5. The Mach 5 from Speed Racer

Oh Speed racer! Now how can you have a cartoon show about a race car driver and NOT have an amazing car to go along with him?? Answer: You can't, so enter the Mach 5! He was often flying as he gunned that car around the track, jammin down the pedal like he was never coming back, adventure was waiting just ahead, and when the odds were against him and there was dangerous work to be done, you bet your life Speed Racer will see it through. Supposedly the fastest car ever built, Speed and his father built the Mach 5 to travel around the world racing it, solving crimes and saving people as well. The Mach 5 had a ton of cool gadgets like saws and things to make it jump over other cars. Although a cartoon, a live action movie was made and people around the world have actually made a real live Mach 5, which looks pretty cool as a real car, but it's the cartoon car that stole many kid's hearts.

4. Ecto-1, The 1959 Cadillac Ambulance from Ghostbusters 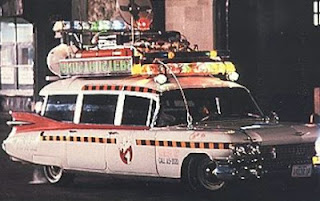 If there's something strange in the neighborhood who ya gonna call? We all know it's the ghostbusters and we all know what they'll be arriving in. Their 1959 Cadillac ambulance known as Ecto-1. Their car appeared in the 2 movies and the cartoon series. Possibly the most distinct siren of any car, Ecto-1 was always rushing off to a spooky scene with the ghostbusters and plenty of room for all of their proton packs. In the second movie Ecto-1 was in need of major repair and the out of business Ghostbusters used it but not to go ghost busting, when they got back into business they repaired Ecto-1 and added a few things and renamed it Ecto-1a. It was cool because there were many Ghostbuster toys when I was growing up and you could even buy the Ecto-1. Ambulances of the time period were also used as hearses, a little known fact but a cool connection for the Ghostbuster's ride if you think about it. 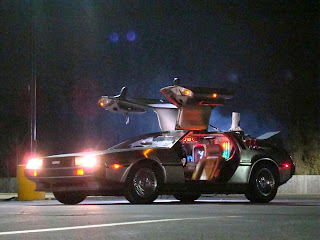 "If my calculations are correct, when this baby reaches 88 miles per hour, you're gonna see some serious shit." Oh and we did! 1985 was certainly NOT the future, but if you wanted the most futuristic looking vehicle you could find in 1985, you would probably go with a DMC-12. How can you make this car even cooler? Make it a time machine, what else?? Besides, like Doc Brown said, the way I see it, if you're going to make a time machine out of a car, you might as well do it in style! Gull wing doors, coming in only stainless steel as a color, and having the ability to travel back in time makes the DeLorean from Back to the Future my 3rd favorite car of all time. The Back to the Future trilogy is my favorite trilogy and Marty McFly might be my favorite movie character but where would that franchise be without the DeLorean? Although destroyed in the final movie, the time machine took audiences back in time and to the future for 3 wonderful movies, (not to mention a cartoon series in which the car was not destroyed). One of the best story lines in any movie, one of the most popular movies of all time, some of the best characters in any movie, and in my opinion, the best car in cinematic history. 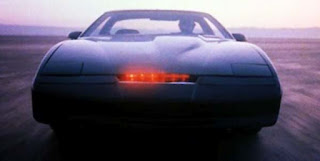 Knight Rider. A shadowy flight into the dangerous world of a man....that does not exist. Michael Knight, a young loner on a crusade to champion the cause of the innocent, the helpless, the powerless, in a world of criminals that operate above the law. Is there a car cooler than KITT? I don't think so. Not only was this a highly advanced futuristic machine that fought crime, he could talk too! KITT definitely had the most personality because he was able to communicate with David Hasselhoff. Many people don't know this, but my Charger is going to be black because of KITT. The second car on my list from 1982 and the second Trans Am, KITT may have been the perfect car, if it weren't for his tendency to talk back to his owner so much. Voiced by William Daniels, (the guy that later played Mr. Feeny) KITT helped solve super crimes and would combat the evil super criminals of the 1980's. Sill very recognizable, and often duplicated, not correctly I might add, KITT remains my second all time favorite car, a car that is VERY hard to beat. However, there is still one car left on the list that tops KITT and all others in my opinion, although I'm sure KITT would have a lot to say about it. 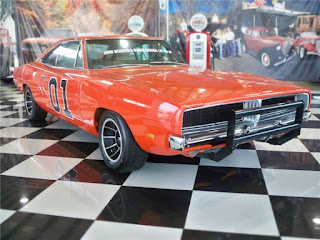 No surprises here, the General Lee, what can I say about the car I've loved since I can remember? As a 3 year old I remember being glued to the TV when this car was peeling out and blasting it's Dixie horn and jumping over the bad guys. For me, there isn't a vehicle in the world that can touch the General, it's the reason why I own a charger today. 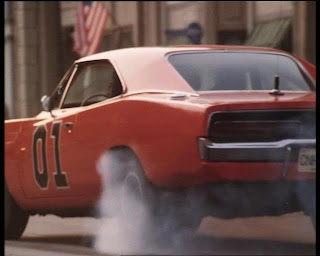 The General Lee had personality, and being the true star on the Dukes of Hazzard, it was like a character on the show in many ways. The bright orange color, the big 01 number on the side, the Dixie flag painted on the roof and a hemi under the hood all came together in a perfect combination.  To this day, nothing has ever captivated me more than this car. I can get Alzheimer's and I won't forget the General Lee. 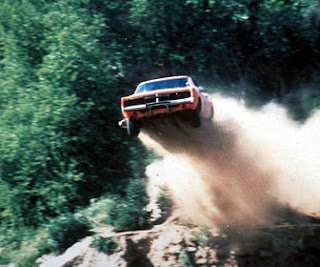 The General Lee still holds several actual world records, including the longest recorded jump. The General Lee is the most recognizable car in the world. And it is number one on my list of all time TV/Movie cars. The Fast and the Furious featured a 1970 Dodge Charger, many people don't know this but it was actually a 1969 Charger with a 70 grill because the director thought the 69 Charger already had too much fame due to the General Lee. 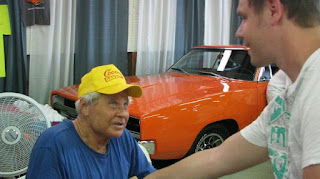 Here I am meeting Ben Jones, he played "Cooter" on the Dukes of Hazzard, and look who is behind us, the General Lee himself. Getting to see the General Lee in real life was a great moment for me. I plan to own one someday too.

It is no doubt that these cars are amazing! All of them possess certain qualities that movie goers love. For instance, the Batmobile, which has evolved a number of times, becoming the subject of different interpretations from artists and producers, is always on top of the list. But the A-Team’s GMC van has been etched into my memory. I always imagine Hannibal, Face, Baracus, and Murdock doing some crazy, unbelievable stunts while on the road!

Yes! The movies indeed gave the Beetle the impression of being a lovable and cute car, don’t you think? ;) Incorporating a car in movies or commercials could indeed effectively boost the popularity of a certain car model.