There is nothing worse than opening up a hood and seeing a filthy, dirty, gross engine is there? I decided to try an engine degreaser, mainly for the Charger's engine but also for my Honda's engine, which has become very dirty over the past year. I went with the GUNK brand engine cleaner which offers a range of different cleaners for your engine, ranging from just a bit dirty to caked on, baked on grease from years of use. Today I used the heavy duty gel for the dirtiest of engines.

PROBLEMS: I'll start out with the problems and draw backs. First of all, after you apply the engine cleaner you must then rinse it with water, like from a hose. This is annoying because not only do you need access to a hose but you also can not start the car until the cleaner is rinsed off, so when you put it on, you better be ready to take it off with a hose that is in close proximity. The engine must be off and cool when you do this so don't drive anywhere before you do begin. Due to all the electrical parts, there is always a scary moment after you spray your engine down with water and wondering if it will start again.

Putting it on isn't difficult but it really smells bad and even after the rinse and dry there is still a pretty fumey strong smell to the engine. If you are spraying your engine with water you are probably already asking yourself, isn't that a BAD idea? Yes, IF you don't first take the proper precautions. If you have a distributor cap you must cover it in plastic wrap or a plastic bag, or anything that will keep water off of it. You also have to cover the intake so no water gets in there either, remember an engine bay is covered by a hood and rarely sees water so it isn't made to withstand a blast from a hose, this was something I wasn't too keen on doing.

Make sure you get all of the GUNK off the parts, if you don't it will dry and be just as bad as any baked on grease was before it was applied. Since you are being so careful not to ruin the engine and electrical parts with the hose you don't full get the GUNK off of the engine and you'll have to end up wiping a lot of manually, not a big deal but with all the small areas for water to collect, you'll be doing that anyway. A check on my engine hours later revealed a lot of new rust in places there wasn't rust before, again, I hosed down the engine, what did I think was going to happen?

I really question how well the GUNK worked because in my opinion just spraying an engine bay with a hose would have taken a ton of the grime and dirt away on it's own. They say to let your car idle afterwards to help dry the engine, I didn't find this all that helpful myself but I suppose results may vary. 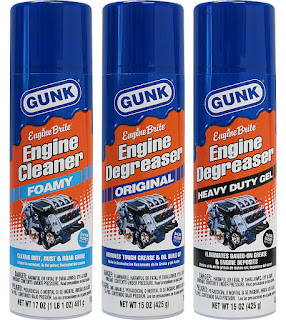 GOOD STUFF:  There was a lot of good about this product even if it appears I was pretty hard on it above. The cleaner really did do it's job of cutting through that grease. My car's parts look brand new and there is NO sign of old dusty dirt on them. I didn't even wait the full 10-15 minutes they recommend you wait, remember I bought this can for my Charger, which has worse dirt, grease, leaks, and years of crap, so my Honda Civic's engine really wasn't too horrible to begin with. I let GUNK on for about 7 minutes before I got antsy and had to start rinsing. I really feel I could have used the FOAMY or ORIGINAL cleaners for my Honda.

Most of the GUNK came right off with the water but other parts had to be wiped off with a cloth. Most of those parts now sparkle like they were just put on, which is really nice considering I think some of those parts were dirty and black when I bought the car 7 years ago, so it was really nice to see some shine under the hood.

Sure the prep work takes a bit of time, but far less than changing a spark plug or tire or doing an oil change, especially in newer engines like my 05 Civic, now when I do my 74 Charger I will have much more prep work before I start to spray the GUNK all over the engine bay. But if you want to sell a car or keep a classic car looking great under the hood, this stuff will definitely do the job for you.

OVER ALL:
I can't be sure but I think any cleaner would do just as good a job as the GUNK brand did. Ideally a cleaner wouldn't need a hose, after all you are going to have to wipe a lot of it and excess water off after you use it anyway, so why not just a spray cleaner that you wipe off instead? Perhaps they do make these and I just don't know about them? For the money though I think it is a safe choice, using just plain water won't cut through the grease and grime and a cleaner made for other car parts might harm some engine components. I think what it really comes down to is how dirty your engine truly is. The dirtier the better stuff is going to work for you, if your engine and car is pretty new I would suggest just taking the time and effort to using old rags or cleaning wipes. If your engine is very old and dirty then this stuff is going to help you out a lot more in the long run, even if you still have to wipe most of the engine off yourself. So all in all I would recommend GUNK brand engine degreaser, but that's just my two cents.
Posted by Andrew at 9/01/2012 12:16:00 AM

Hi. Packofcrows here from ft86club a scion FRS and Subaru BRZ enthusiast forum. I have to say gunk does the job 90% well on cars that have gunk and oil no older than 2yrs. If it's older, you must apply gunk, rinse, reapply and scrub. Once you let it sit, you can rinse off and apply dresser. I've tried it twice and enjoy it. Its less stinky and strong than other brands so I'd your car is super dirty, maybe grab two cans or try a different brand.

At Petron Plus Direct, we provide the best heavy duty grease that widely used in heavy automobiles such as truck steering, braking systems etc. Contact us at 630-504-2100 with your specific requests.

the loan company that grants me loan of 5,000,000.00 USD When other loan investors have neglected my offer but mr benjamin lee granted me success loan.they are into directly in loan financing and project in terms of investment. they provide financing solutions to companies and individuals seeking access to capital markets funds, they can help you fund your project or expand your business.. Email Contact:::: Also 247officedept@gmail.com or Write on whatsapp Number on +1-(989-394-3740)