BIGFOOT THROUGHOUT HISTORY, BIGFOOT AT GETTYSBURG 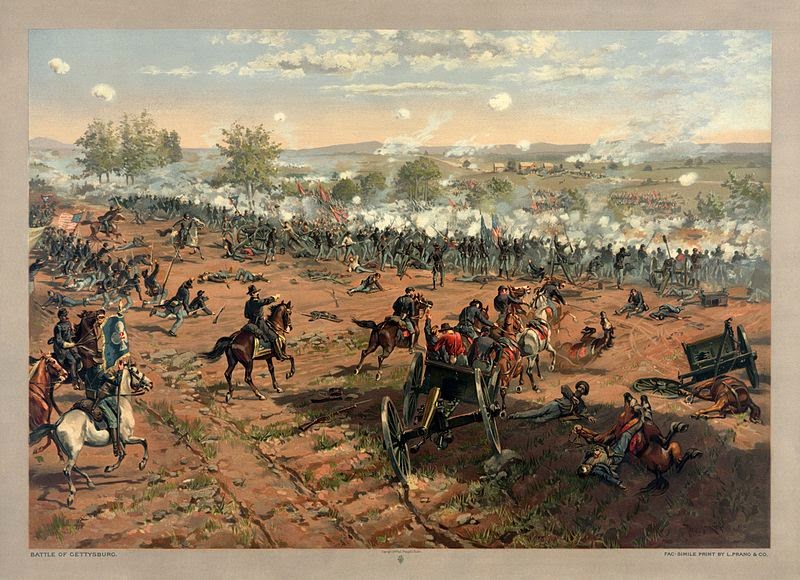 We are marching to Washington and have never been this far north yet, truly are spirits are high and we all know we can win this war between states! A man that calls himself Bigoot told us he knows a short cut to Washington and to follow him. He appears to be lost due to his frequent stops and scratching his head and going back the way we came. He is an odd man, he is hairier than any man I have ever seen before and his feet are massive and the stench about him could force a vulture sitting on a horse carcass to shove its head into the horses butt to avoid the smell of Bigfoot. He wears no shoes but claims he desperately needs a pair and wants to stop off in a little town called Gettysburg, we voted not to go to this Gettysburg but Bigfoot said, too bad.

What happens here next only God knows. The Northern army is here and we are facing the gates of Hell itself! Bigfoot led us right into a battle that none of us want to fight in, we are out manned, out gunned, and in unfamiliar territory. The North was unaware of our presence until Bigfoot started to yell antisemitic things at them, shaking his butt in their direction and yelling grotesque things about their mothers. A Northern soldier tried to shoot Bigfoot in the face and the battle started.

I have survived the second day of the battle.  Bigfoot and 5 other men are the only remaining from our regiment. It pains me to admit it but we ran from the enemy although I am alive because of that fact. The second we stopped running to catch our breath, Bigfoot was the first to speak. The first thing he uttered was that the North's uniforms were so much cooler than ours. He then called me a pussy for running away! When I tried to point out that he also ran and was the first to run and pushed others out of his way and even carried a drummer boy as a shield, he still said I was a pussy.

Bigfoot claimed that he needed to celebrate the 4th of July as he was accustomed. He used over half of our gunpowder making homemade fireworks. Now I fear we don't have enough gunpowder to last us one more day. General Lee questioned the men when he realized someone had violated Traveler, his beloved horse. Bigfoot pointed at me but looked awfully suspicious.

We have been reassigned to a new regiment. We were put on the front lines with General Lee himself! Our general gave a heart filled speech that left many of us in tears with pride and loyalty for our gracious leader. Bigfoot rolled his eyes and yelled out, LAME. Right before we were given the charge, Bigfoot leaned over to me and said, you know we're all dead? I do not care for Bigfoot and his negative attitude. During the fight I saw Bigfoot shoot many of our own men, he justified his actions by saying he was confused by grey and blue and to him they are the same color.

General Lee asked someone to carry a letter for him to get reinforcements and that this mission would be the most important in any battle yet, I raised my hand but Bigfoot shoved me out of the way and took the letter himself. I hope Bigfoot can save us all.

We are clearly able to see Bigfoot on the other side now fighting for the North. They gave him a horse and ranking of General. Through our telescopes we can see him pointing to our position and it is obvious that he is telling them our strategy. I fear we will be unable to win this fight or the war now all because of Bigfoot. Why God chose to curse the earth with Bigfoot, I'll never know.

All is lost. We have lost 100's of men and the battle and quite possibly the war. I have been taken prisoner and although my life was spared, I wish it had ended on the battle field. They have put that traitor Bigfoot in charge of the prisoners. I grow tired of his General Lee impressions and his Let's Go Lincoln chants. He continuously states the South sucks. He has made me his personal servant and I have to comb the crap out of his fur every night. I wish I had died in battle at the hands of Bigfoot like so many of my fellow southern brothers.
Posted by Andrew at 3/20/2014 12:54:00 PM

Hi Andrew - do you have a reference for this alleged diary? Thanks

In reading the account, the language is much too modern! I have read hundreds of letters and diaries from that era, and this account just does not follow with the verbiage, wording, and grammar used at that time.

Calling someone a "pussy" was not even said until the early 1900s. He would not be celebrating the 4th of July during this period either. Another verbiage mistake would be the use of "" their uniforms were much "COOLER" than ours"". The use of "cool" in that form did not come to use until the late 1950s early 1960s. Not saying that people NEVER used such wording but to use it as in this so called diary is just completely unbelievable.