My fourth entry into my cheese series was Orange Windmill's Cablanca, a goat cheese. I never had goat cheese before and I wasn't sure what to expect. I found goat cheese is different than cow's milk cheese in several ways. This particular goat cheese won a Gold at the Great Taste Awards. 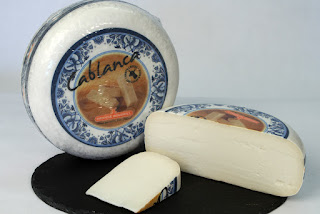 The cheese comes in a wedge cut from a wheel. Very much in the Gouda style, it still had wax on its outer edge. Cablanca uses white wax instead of the trademark red wax of cow's milk Gouda. It was $6.99 for 8oz, that seems to be a trend in the cheese I am finding, 8oz seems to be a standard so when compared to other cheeses, this price was average. Not too high, considered this has been imported straight from Holland.

TASTE
Cablanca is considered Gouda, but it wasn't like any Gouda I've ever had before. Cablanca was very white in color, that stood out to me. It was snow white, not like a regular Gouda that can be considered a pale yellow, but more like Mozzarella. At first taste you get the feel that you're eating Gouda. Goat cheese is known for being usually tangy but Cablanca is on the sweet side since it is aged for 5 weeks. It was mild, more mild than a regular Gouda. It was creamy but not as creamy as a cow's milk Gouda either. Definitely its own taste. It didn't leave a strong cheese aftertaste in your mouth and I think that could have been a trait of goat cheese. 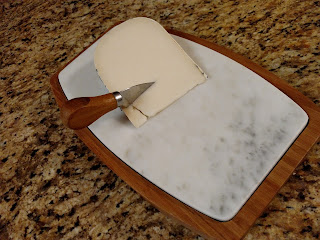 All in all I have to say I had no clue what to expect when trying a brand new food for the first time, goat cheese. If I didn't know what I was eating I definitely would think there was something different about this cheese but I certainly would not immediately realize I wasn't eating a cow's milk cheese. As far as Gouda goes, I'll stick to cow's milk, it is just far superior. Goat's milk is better for people that are lactose intolerant (my condolences to you) but for the rest of us lucky people, there's nothing like a red wax Gouda.


CHEESE FACT: The first cheese to come to America was on the Mayflower.

I found the cheese at Sam's Club and love it!

I found the cheese at Sam's Club and love it!

Goat cheese is typically the most savory, tangy, witch the most complex flavor profile. I am not a experienced cheese reviewer, but that does not seem relevant in this situation as you are not either. Goat milk makes the best cheese due to its higher milk fat content and the varieties of foliage the goats eat. I hope you try more goat cheese without a preconceived notion of what it should be like.