I have tried the cheese, Beemster Vlaskaas. A cheese that won at the 2004 World Champion Cheese Contest, which had 1000's of cheeses competing against each other. It received the gold medal and that means it gets recognition as one of the world's BEST cheeses. 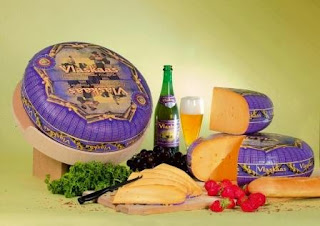 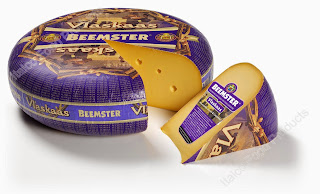 History: This is the newest cheese in the Beemster line but it is derived from their oldest recipe and used to be made centuries ago. Beemster Vlaskaas or roughly translated to, "Flax Cheese," isn't made with any flax but was named for the flax harvest time of year. The cheese was made only at this time of year to be eaten by the workers. In 2004 the harvest festival was brought back as a community celebration and the ancient recipe was rediscovered. Beemster produced the new Vlaskaas and took it to the World Champion Cheese Contest held in Wisconsin, where it won the gold medal. Beemster cheese is unique to all other cheese (including other Dutch cheese) because it is only made in the Beemster Polder. A polder is land that was once under water. This means that the blue ocean clay that produces the grass, gives it special nutrients so when the cows eat this grass to produce their milk, the milk and therefore cheese, has a very distinct and unique flavor. Ultimately, this makes the taste of Beemster cheese one of a kind! 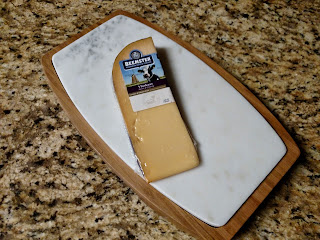 Taste: After my first bite I could clearly see why this cheese had won a gold medal. The aroma is strong when you first open it. The flavor just punches you in the mouth, but slowly. Your entire mouth is filled with this tangy sweet flavor that was surprisingly very similar to a very sharp cheddar. Unlike sharp cheddar, the after taste wasn't over powering. The texture is very creamy and yet there are protein crystals, the kind you find in an extra sharp cheddar, which was surprising and curious because usually cheese that contains protein crystals has a texture that is firm and will crumble, not to mention so sharp it makes your mouth want to pucker! Not Vlaskaas, it was smoother than Gouda. I don't know how they did it.

This would be great with any white wine and fruit or nuts. Beemster also recommends a cheese board made up of all Beemster cheeses and although I haven't tried anything else that they produce, they probably all go well together. 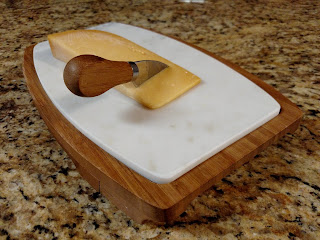 I may not be a judge at the World Champion Cheese Contest....(yet) but I have to agree with them. I give Beemster Vlaskaas a 10 out of 10. If you're a fan of extra sharp cheddar, give this a try, the creamy texture is a welcomed change from the crumbling protein crystal filled cheese you're used to. This part of a wedge comes in at $6.99 for 5.3oz, not too bad considering it was imported from the Netherlands AND it is only made in one tiny part of the world AND it also can't be duplicated anywhere else AND it is an award winning cheese. After you realized that, we're pretty lucky that we even get to try some! Beemster, I take my hat off to you, and so the people out there know, Beemster has several more cheeses that have won gold medals. I think Beemster will be finding itself in this series in the near future.

A cheese that came from humble beginnings and made it all the way to a World Champion, that's a real underdog story with a happy ending. Vlaskaas is worth its weight in gold, but that's just my two cents.


Cheese Fact: Did you know? American Cheese is NOT considered cheese by law. It is illegal for a cheese manufacturer to label it as just, "American Cheese."

Thank you for reading and I hope you check back for my next entry in this series!