For my fifth entry I tried some cheese from merry old England! They have been making cheese since 1498! The English aren't known for their cheese making skills like the French, and yet this is the country that gave us the almighty Cheddar and they claim to have 700 varieties.

HISTORY: Gloucester and Double Gloucester has been around since 1498, which is pretty impressive in my book and made me really excited to try it. The, "Double," in the name indicates that it is used from two milkings or has cream added, plus it is twice the height of single Gloucester. Double Gloucester usually has things added to it, typically chives and onions, that is the one I tried. This cheese comes from milk that is exclusively collected from the Gloucester cow, a once nearly extinct animal. This was a summer time favorite 100's of years ago and is still enjoyed today by many people around England. 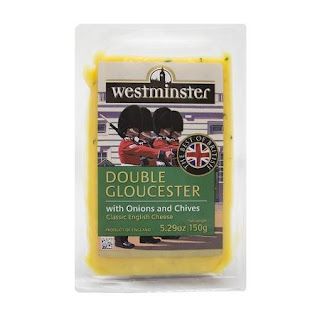 Double Gloucester by Westminster, comes in a wedge shape cut from a larger wheel. It has a very golden yellow color and creamy texture. There are clearly green bits of chives and onions scattered throughout the cheese.


TASTE: The second you open Double Gloucester you get the strong aroma of onions! I noticed right away at how oily this cheese was and my fingers were covered in oil. Double Gloucester is usually dry and flaky when aged, but this particular brand had a fairly creamy texture. The moment you bite into this cheese you immediately taste the onions and chives. The taste explodes in your mouth and can be very over powering. I have to say, it was difficult to taste the cheese itself between all the onion and chive flavor. The onion does have a kick to it as if it was a fresh onion, which again, got to be over powering in my opinion. I felt the quality of the cheese was very low. It was very waxy, almost like plastic. A very cheap cheese feel. If you've ever had those gas station meat sticks accompanied by what they call "cheese," that is what this was like, a surprising and disappointing feature. This was made with vegetable rennet and I'm not sure if that has anything to do with it. I have a hard time believing this is how Double Gloucester was meant to be and I think the company of Westminster is more responsible for this poor quality. It was difficult having more than one bite of this stuff. It was on the pricy side too but maybe I just think that because it was so bad. I understand it was imported from England but if it is bad, so what? 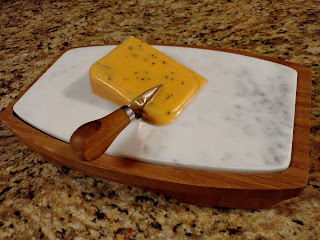 Sad to say Double Gloucester is going to get my lowest score ever. I'll give it a 5 out of 10, and that's being generous. I really do feel it was more of the brand than the actual cheese in this case though, that is why I am not giving up on it. The onion and chive taste is just far too strong, you might as well just bite into an onion and be done with it. However, if you love onions then this might be the right cheese for you! I would like to find some single Gloucester and more Double Gloucester from a different company and try it again.

Here in the U.S. Westminster is famous for dogs, but the English Westminster Double Gloucester can go to the dogs as far as I'm concerned, but that's just my two cents.

CHEESE FACT: Cheese making was done by the ancient Egyptians because hieroglyphics found in tombs from 2000 B.C. depict the cheese making process!


Thank you for reading and be sure to check out my next entry in this series!