After my original "Manager's Special" I went and picked up 3 more "dead" orchid's to try and revive them. I showed you already how they grew new leaves and started to sprout roots. Well now each of them is growing a new flower spike which will soon grow buds and bloom into flowers. I also bought another manager's special from the same place the original one came from. The other 3 are from Lowe's bargain rack of dead plants.

The most exciting part is that I have no clue what color these flowers will be because they didn't have flowers when I got them. I will know soon enough and post another update. 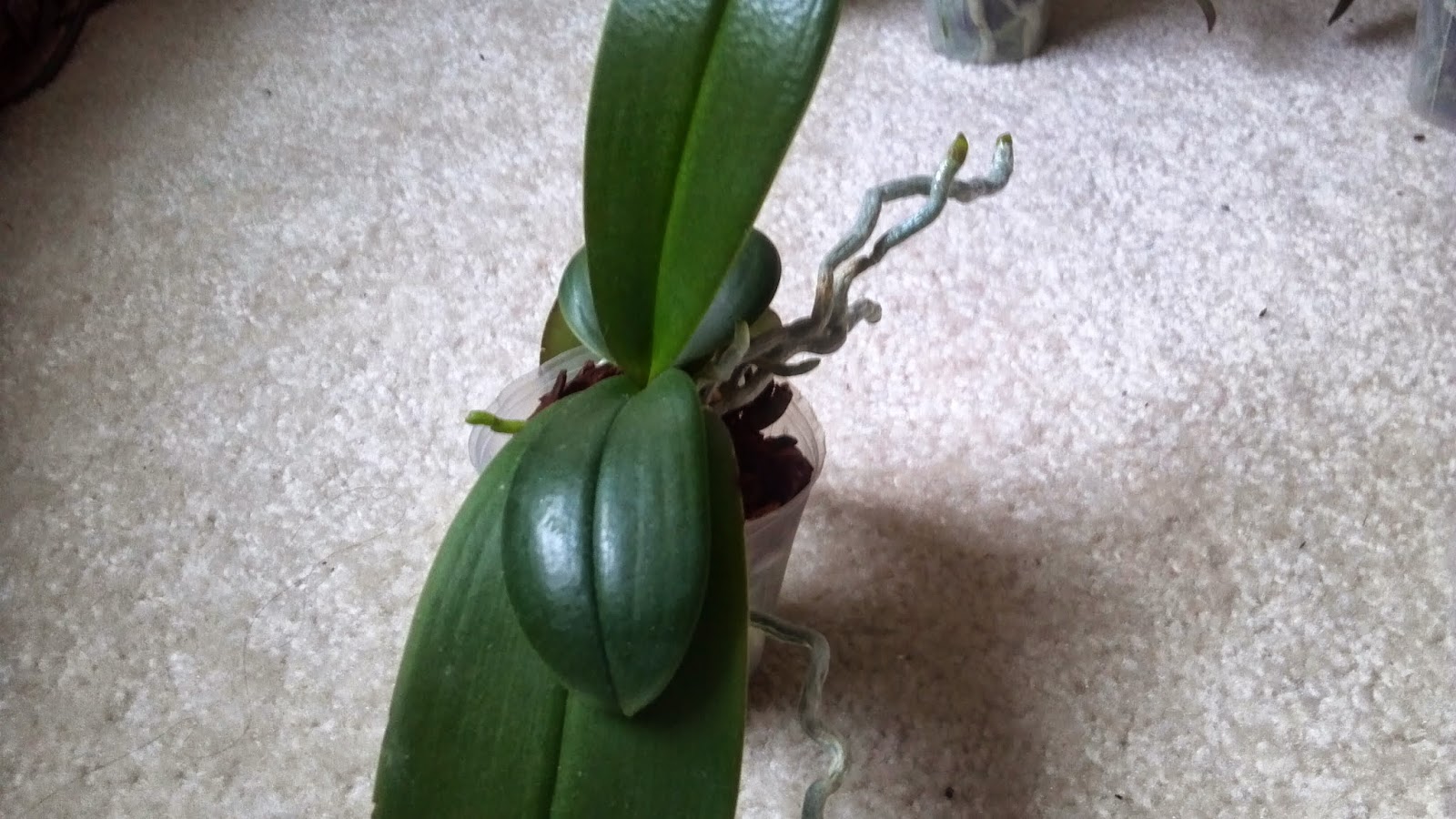 This little guy (above) grew some huge leaves then some long air roots and then this tiny new flower spike appeared. It is the smallest flower spike out of them all but this one grew the biggest leaves. 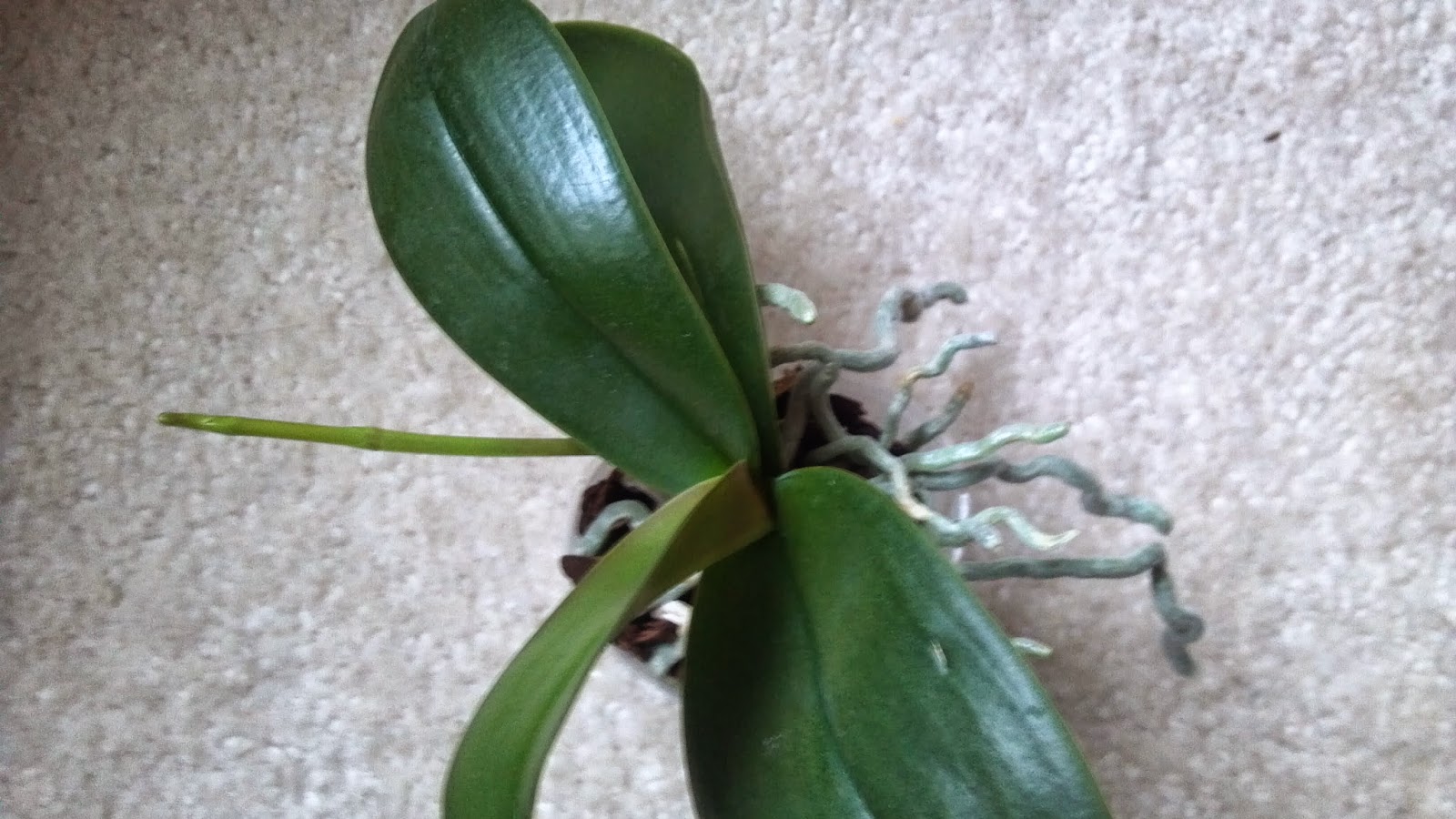 This guy has a nice long flower spike but a ton of air roots on the other side. It looks like a mullet. The top two leaves were also grown after I bought this one. 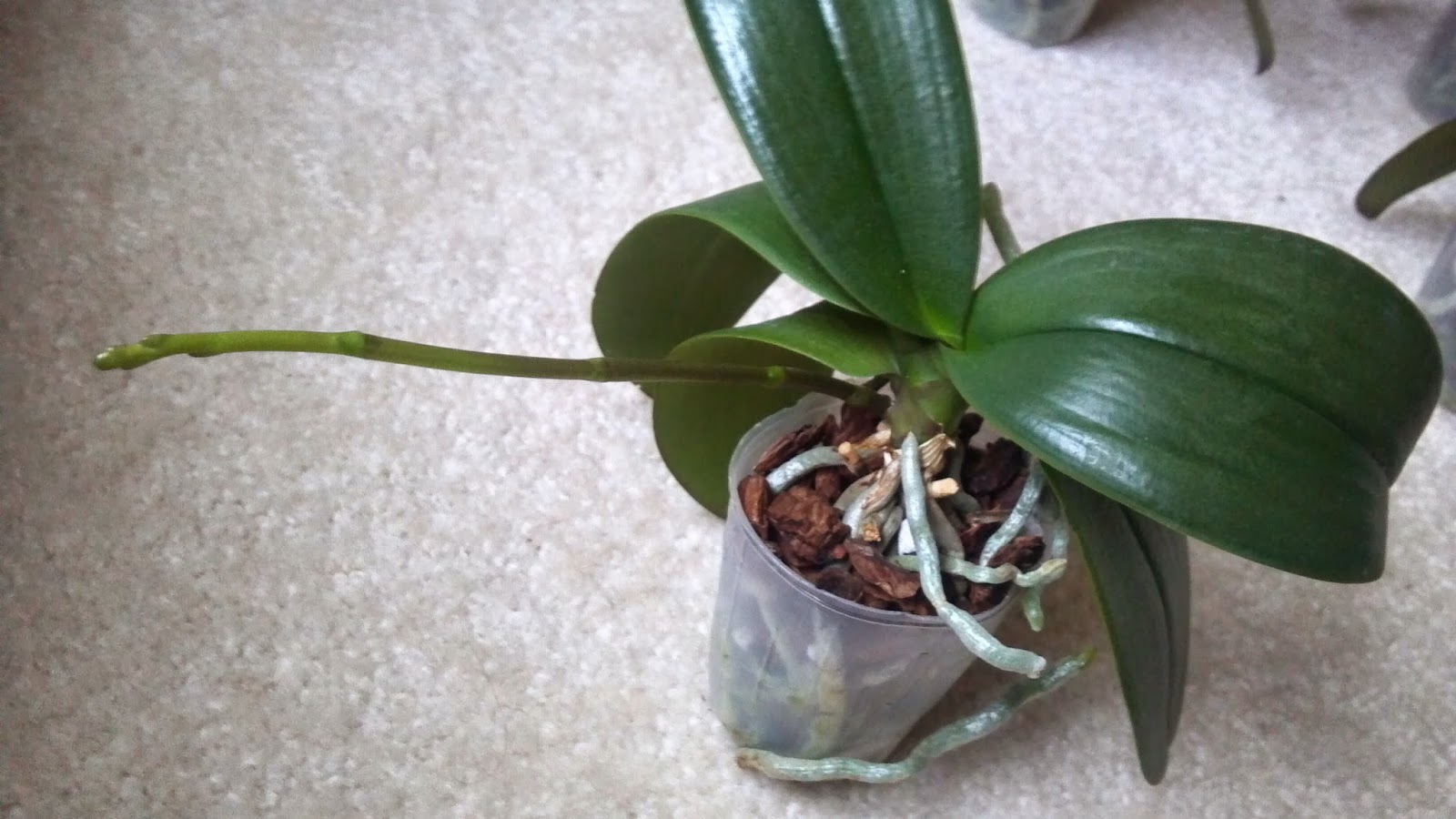 This one has the longest flower spike and many new roots, including one that came out of the hole in the bottom of the pot and has grown up the side. You can even see where the tiny buds will start to form on the flower spike. 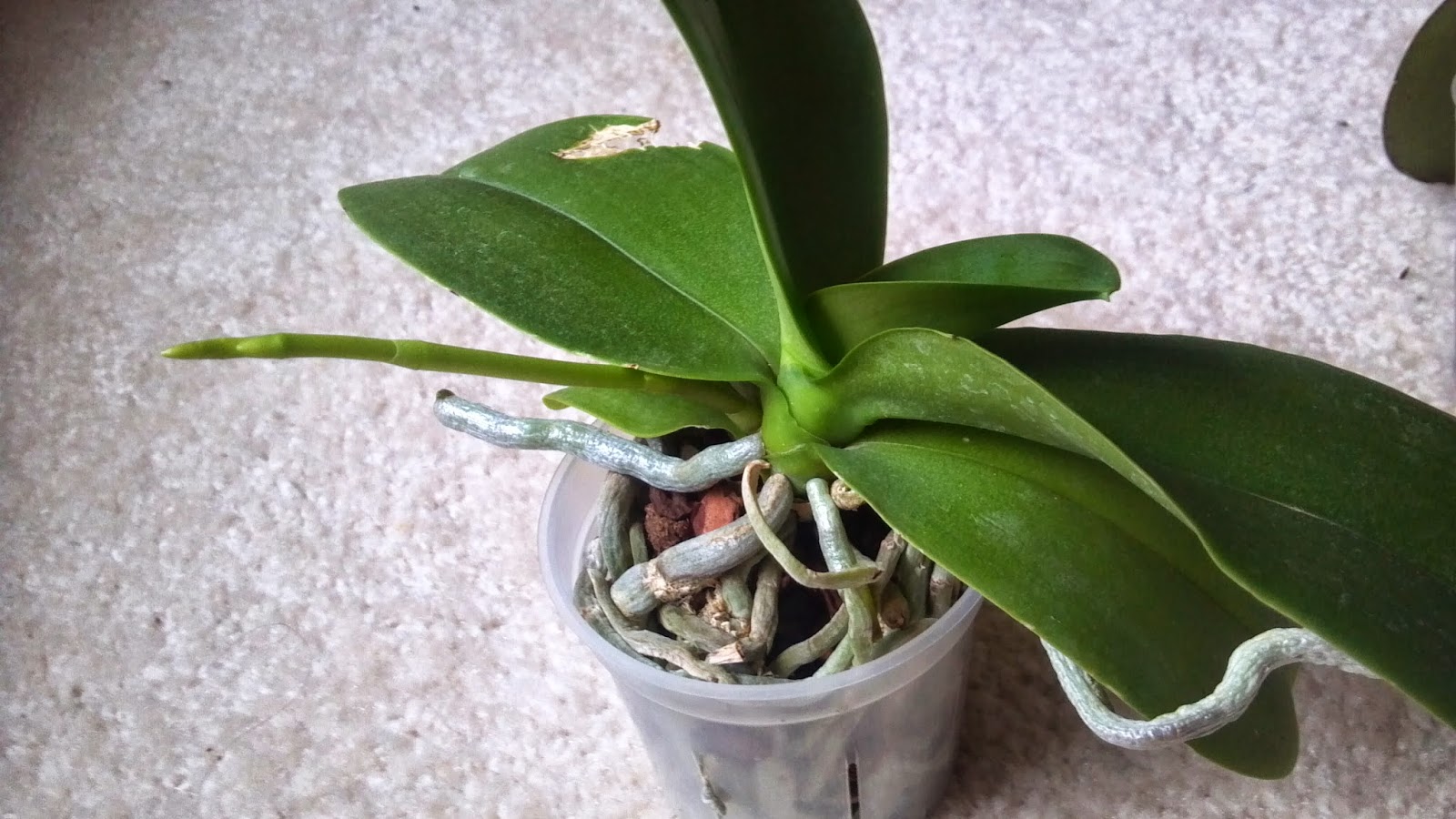 This was the one I bought from the same place my original "Manager's Special" was bought. As you can see, it has a nice long flower stem and many new air roots. It only grew one new leaf since I had it but it was never in the terrible shape the others were. I think the big tear in its one leaf is why they marked it down so much. It also didn't have flowers on it but it did have a flower spike. I won't know what color of flowers it has until they bloom. 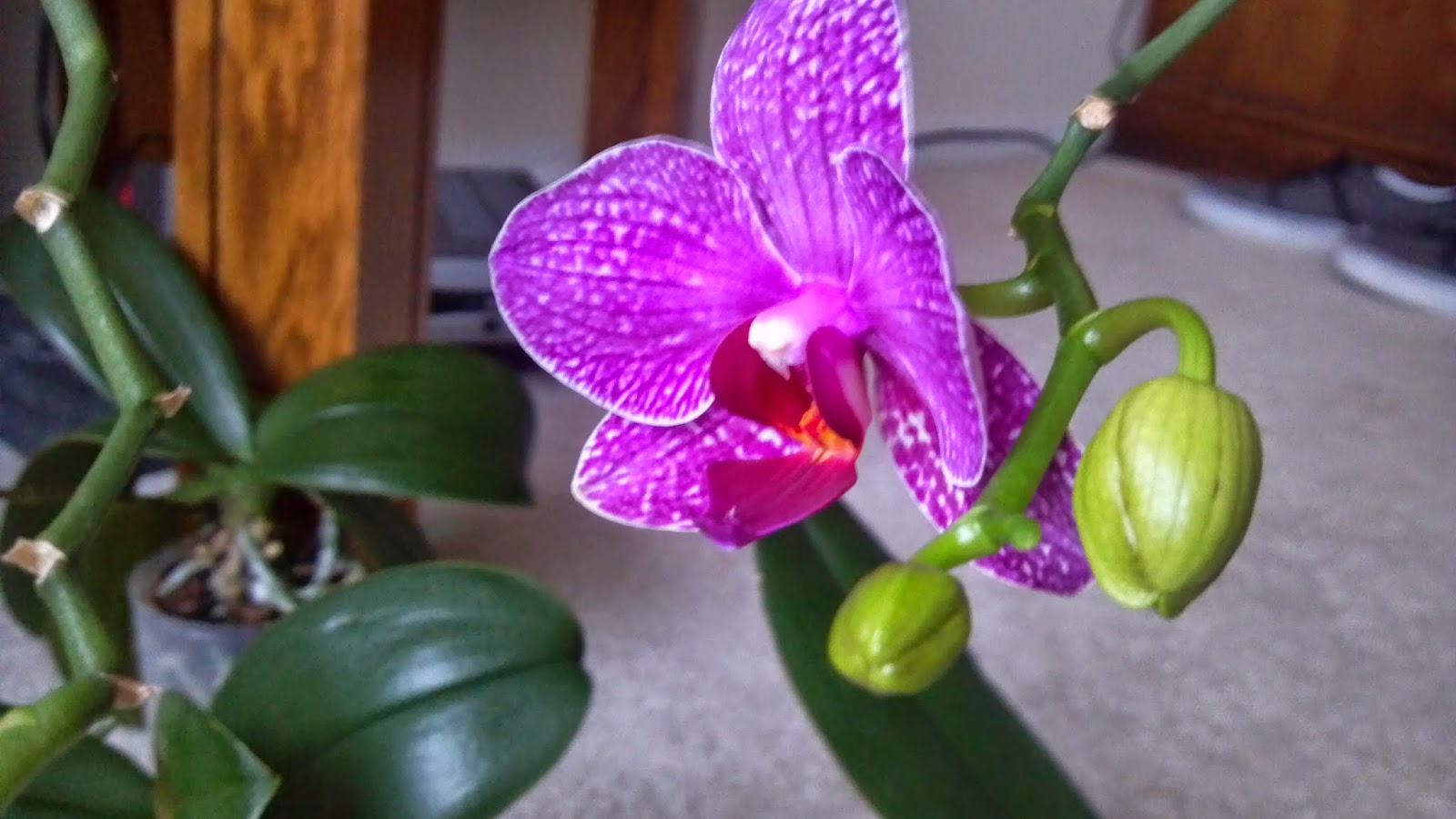 And here's the newest bloom on my original orchid, the Manager's Special. Left for dead and marked down just to get rid of it. Looks ok to me.....

So there you have it, the update on my 4 saved orchids. The most surprising thing is that as I nursed them back to health they all went in the same direction. First they started to grow new leaves. Next they started to grow new roots and then air roots. Last, they started to sprout these new flower spikes. That isn't as surprising to me as the fact that they all did it at the same exact time. I thought some of them would take their time or whatever but as you can see, they all grew the same things at the same time, including new flower spikes as if they all were on the same timer. Odd how plants and nature can be sometimes.

Remember, plants will tell you what they need...you just have to know how to listen. If you do, you might just hear one say, "Thank you!" I would say these 4 new flower spikes on these 4 different orchids will be my, "thank you," but that's just my two cents.