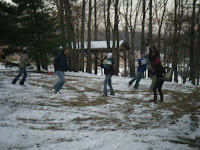 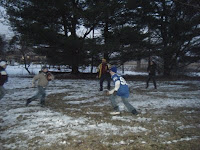 This is how the game went. The teams were Me, Uncle Tony, Uncle Carl, Nicki, and Erica. The other team was Adam, Michael, Larissa, Katie, and the other Katie. Rachel played center for both teams due to her fractured spine. (yes, and she still played)

Our team had the ball first and we started to drive with a few passes from Uncle Tony until he threw an interception to Adam who ran it back for the game's first touch down. 7-0

They kicked off to us and i became the quarterback, i passed to Uncle Tony, Uncle Carl, Erica, anyone who was open. We gained a first down and continued to drive down the field, i saw Erica open in the end zone and i threw it, she caught it for our first touch down. 7-7

When they got the ball they tried a few short passes and then i was covering Adam and a pass i believed to be over thrown and out of his reach was caught by him and ran in for the touchdown. 14-7

We got the ball back and after a few short passes i saw Uncle Carl break free of the defenders so i threw a long bomb which he caught and ran into the endzone tying the game again. 14-14

We kicked off and Michael was able to run the kickoff back the entire way for another touchdown, the score was now in their favor. 21-14.

After a few short passes and driving steadily down the field i found Uncle Carl deep yet again for another touchdown. 21-21

The next drive failed for the other team and they went for it on 4th down, when they didn't make it we knew it was our chance but Uncle Tony was intercepted again and our drive stopped. Another interception by Erica gave us the ball back. I found Uncle Carl deep again, this time he was run down by Adam but we were very close to the End Zone. I found Uncle Carl again for my 4th touch down. 28-21

Their next drive stalled and the ball was turned over on downs, an interception gave them new life and as they were driving down the field on what was to be the last possession of the game they were driving to what seemed to be fate and a tie for the 15th Turkey Bowl. A pass to Katie Carl was bobbled and fell into my hands, the interception sealed the win for our team.