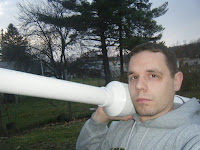 The first shot was a success, launching the potato at least 325 feet out of my yard, past the neighbors field and smashing off of another neighbors fence post. (see video)

And so my potato gun project is done and the SPUD BUSTER CANNON is now fully operational!

This was the test shot for the Spud Buster Cannon, as you can see i load it, aim and fire! You can't see the potato land or should i say burst off of a fence post, but it did happen. If you listen at exactly :29 seconds you can actually hear faintly the potato hitting the wood.
Posted by Andrew at 11/02/2008 04:51:00 PM

I finally found out how to Make a Potato Gun I'm pretty dang proud of myself.