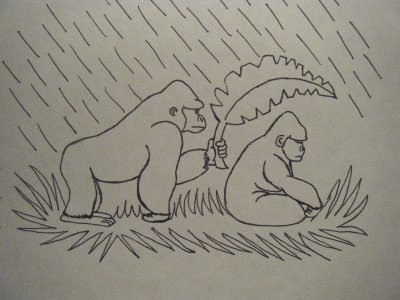 Designbyhumans.com is a website where mainly artistic type people can submit ideas for shirts, in a contest style poll, a winner will be chosen and that design will be made into a shirt. I have wanted to submit something for a while now but i never had a good enough idea. If you go to the site you will see some of the great ideas and great shirts that people have come up with, there is a lot of talent on that site. You can buy the shirt winners and I personally could spend a ton of money on that site.

So today in school i came up with a great idea. I don't know where it came from, i don't know why i thought of it and i don't even know what it means. I just stood up to go to another class and the image popped into my head and i knew the name at the same time. i sketched it six times until i felt i had it right then i came home to work on a really good sketch and the final copy.

My shirt idea is called, "Gorilla Monsoon." Don't ask me where i got the idea from because i don't really know. It has two gorillas on it in the rain with one holding a leaf over the others head. I'm not sure what this stands for, i suppose it can be taken a few different ways. Loyalty, friendship, hardship, love, something cute, something inspiring, something funny, any one can see this picture and assume it means one of those things. Gorillas have always been such a cool animal for me, maybe because they are a lot like us or maybe because they look so cool, either way i decided to try this idea. I don't really care if it doesn't get any votes, I've enjoyed making it. It is only the first of many shirt ideas i hope to work on and submit to the site. People might look at it and say, worthless crap and horrible idea but i like and I'd buy it and thats my two cents.
Posted by Andrew at 10/09/2008 11:28:00 PM