I'm All About Tudor Style Houses

What is a Tudor house? 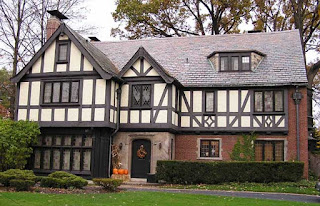 I'm all about Tudor Style Houses. I'm sure you know what it is, even if you didn't know its name, you've seen them before. They are far more popular in the North East, and there is good reason for that. They have often been described as "storybook fairy tale houses full of charm," and if you've ever seen one, that's a pretty good description. 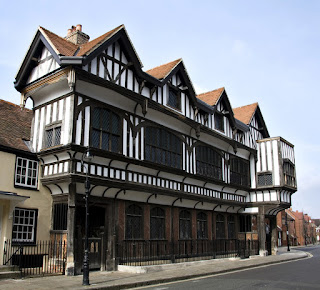 The true Tudor houses of England were built at the end of the Medieval period into the Renaissance period. Back then, they were built because it was the best way to build a house and they used what they had. They used large wood beams and filled in the spaces with stucco. They had huge fire places, because they needed to heat the entire house with them. They had thatched or wood shingle roofs, because again, that's just what they had for roofing material. 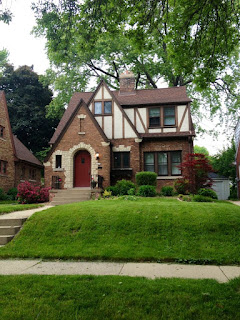 In America, from 1890 to 1940, people copied this look and we now call this era the American Tudor Revival. Homes were built to resemble the old English Tudors, but this time the beams and stucco plaster outsides were more for the look instead of the actual structure of the building. 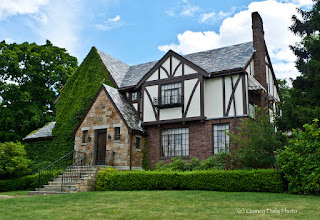 They were widely popular with the rich, who wanted to make a classy upscale house to show everyone that they had money. The houses were also known as "stockbroker Tudors," due to the rich people building and living in them. Many northern cities experienced massive growth during those years and the people that were making money from steel mills, lumber companies, the railroad, and mines, were the ones building Tudor style houses. There are even some neighborhoods comprised entirely out of Tudor style houses! 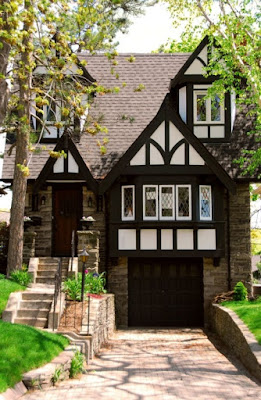 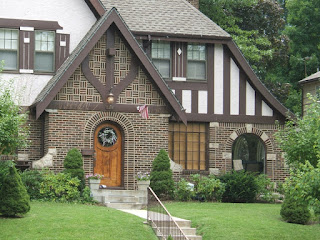 Tudors lost popularity when World War II began because Americans wanted to go in a more American direction with their architecture. They believed it was more patriotic to build and live in homes with more of an American feel. People began to go back to the old Colonial styles instead of European influenced houses. This is actually what started the American Colonial Revival.

What makes a Tudor a Tudor though? No two are the same, yet they all have the same design elements. Steep pitched roofs with multiple gables are necessities for a Tudor style house, but that's not all. Tudors are also made out of brick, stone, and wood but often have all three as the house is divided from its stone or brick bottom half and a wooden top half, consisting of exposed beams (known as half-timers) and stucco/plaster spaces in between the beams. The half-timbering with stucco in between in the Tudor signature look. 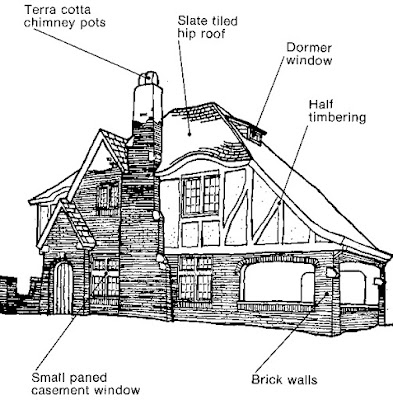 Tudor windows are all very similar. They are long upright rectangles, grouped together, often with multiple panes. Diamond patterns are also very common. Dormer windows were staples of the Tudor design. They also have very big chimneys because on the inside, the large hearth was meant to be the centerpiece of the home. The top of the chimney sports a chimney pot, although functional, they were mainly used to be decorative. 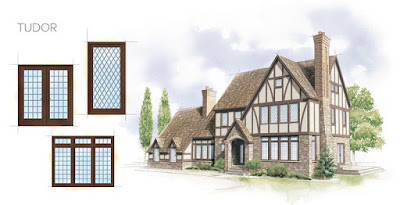 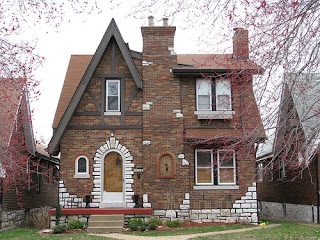 Tudor doors vary but again, the design elements remain the same. They were to be large wooden doors surrounded by stone or brick. The entry way into the home often had its own gable. The doors themselves were commonly rounded. 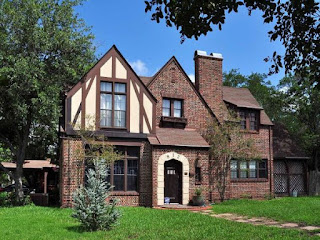 Tudors don't have to keep the same color scheme. Although dark brown to black beams and white stucco is the most common, the color combinations can come in just about anything. Some "reverse" Tudors have light wooden beams and a darker color for the stucco.

Today the Tudor style house is making a comeback, a lot of people still love the appearance. The modern Tudor uses the same design elements but has far more space and has the modern updates people have become accustomed to, however, they lack the charm and craftsmanship of the homes from the early 1900's. I love these houses and I always have. Finding one in Northern Texas is just about impossible because homes and neighborhoods here aren't nearly as old as the ones in North East cities.
One draw back, that I have noticed with the Tudor style, is the size. Many of them were built to be on the smaller size but when one is big, it usually has a big price tag to match. It isn't anything strange to see large Tudor style houses listed for sale at over a million dollars. 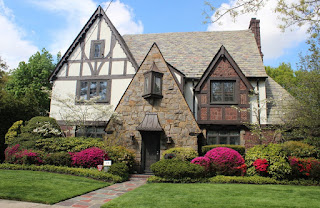 Not all Tudor houses are on the small size. When the design elements come together on a large scale, the results can be spectacular. Here are some amazing examples of the very large Tudor style house. 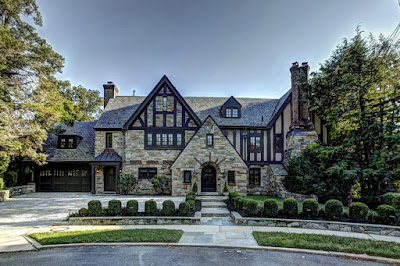 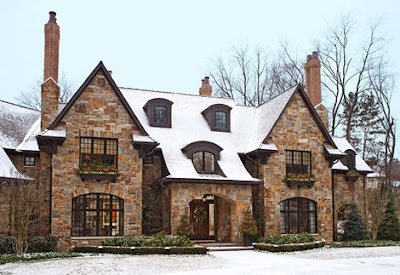 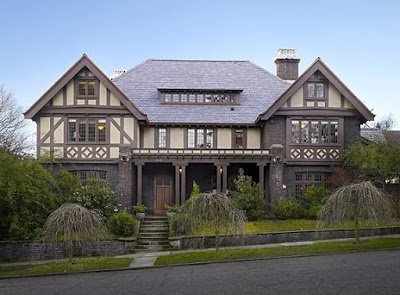 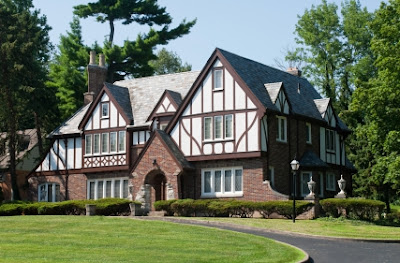 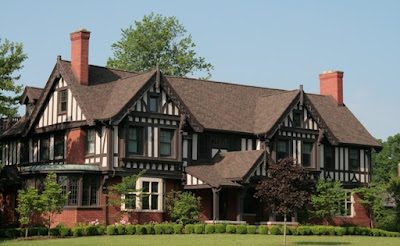 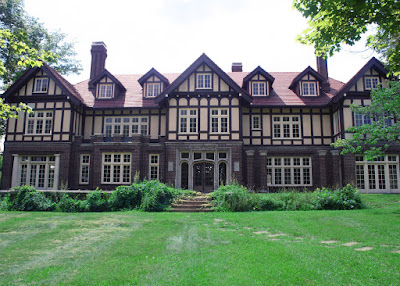 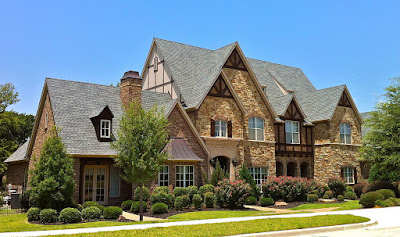 I would love to own one someday. I have always wanted to live in a Tudor even before I knew what they were called. There is just something about an old house that I love. I think the new houses of today are cookie-cutter and lack charm. It's hard not to agree when you see a Tudor Revival house that is nearly 100 years old, but that's just my two cents.

That One Keller Dude said...

Hi. I'm happy to send you a picture of our lovely 1937 Tudor Revival home. E-mail me at thatonekellerdude@gmail.com

I enjoyed this, thanks Andrew!

Love this article and the wonderful pics. Thanks for sharing

Thanks for the post about the lovely Tudor homes. Hope you continue to blog one day! Take care.

What a great web blog . I like this blog because of its design and interface. Private Tutor Boca Raton It is user friendly and it is nice to visit the blog.

It was a beneficial workout for me to go through your webpage. Private Tutor Park Slope It definitely stretches the limits with the mind when you go through very good info and make an effort to interpret it properly. I am going to glance up this web site usually on my PC. Thanks for sharing

It seems like an educational blog which always some new information to visitors Private Tutor in Parkland and Enjoying every little bit of it and I have you bookmarked to check out new stuff you blog post.

While the exterior of these houses are really cool, it is the inside that is killer. I would suggest going to Zillow and looking up sold houses in Shaker Heights, Ohio. These were along Millionaire's Roe. The woodwork on the interiors is incredible. Burl wood panels. Coffered ceilings. Libraries. There is one place that even has a pipe organ. Then you look out into the backyard, where the is lots of greenery mixed with stone walls. Complete with statues, fountains cement lions. Often those places had their own green houses. Even the lawns are crazy. We knew someone who mowed lawns for one of this houses. They would mow the lawn twice a day in opposite directions, raking the grass between cuts.

What is interesting is these houses now don't sell for that much money. Apparently the lack of insulation and constant maintenance is a big drawback that hurts the resale value.