CRAZY ADS FROM 1912 THAT WILL SHOCK YOU!

The worst thing I can think of is advertising. It's everywhere, TV, radio, movies, billboards, fences, sporting events, buses, buildings, Youtube, Facebook, and basically anywhere your eyes can look. (Also as a side note, I have been offered many times to add advertising on this blog site but I refuse every time because I don't want my readers to be bothered with that crap.) 100 years ago we had advertising and honestly...not much has changed, at least tactics in getting people to buy products.

For whatever reason in 1912 there were some pretty crazy advertisements that I came across and most of them could use a good explanation. 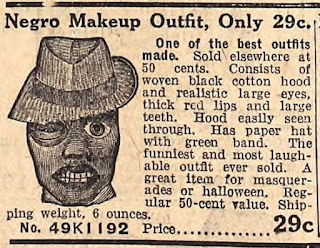 First up is the Negro Makeup Outfit, only 29 cents!!! That's a deal....I think? Why on earth anyone would want to buy this and for what reason is an even better question. I love how it states that this thing is sold elsewhere for 50 cents....so there were a lot of these things being sold?? WHY?!?! It also claims it is the funniest and "most laughable" outfit ever sold. I can think of 100 costumes off the top of my head that would be better than this thing. Also it points out that it is one of the best outfits made, which means there are a bunch of outfits that are made poorly, but this isn't one of those. No, a bag and green hat made for racists is a great outfit. I kinda wish they had an actual picture of somebody actually wearing this. What's up with the eyes? 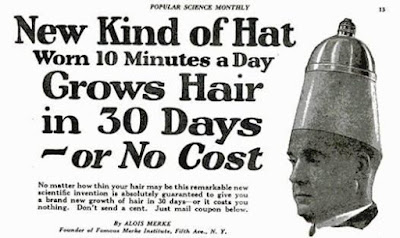 I'm calling bullshit on this one. I can see why nobody buys these nowadays, because they went out of business after nobody grew any hair and they had to give all their money back! They could have at least made the guy look happier, I mean, look at him, he looks depressed to be wearing that stupid thing even though he will have hair in 30 days. This is why it is a bad ad, not because it's complete made up bullshit. I really question what this, "hat" does. Do you plug it in or pour chemicals into it, or does it just sit there looking dumb?? Again, this is why it was a bad product. Make it look like a normal hat or put cartoons on it or something to spice it up! Also if you wore it for 30 minutes a day would it grow hair in 10 days? 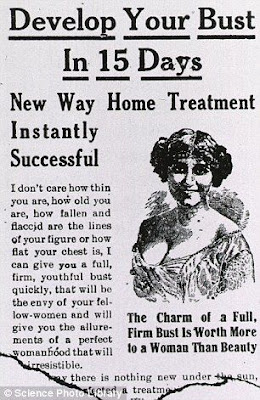 Again, calling bullshit on this one. I will say that their luring line of, "The charm of a full, firm bust is worth more to a woman than beauty," is pretty spot on, even today. Although that may have made a lot of women buy into this ad, we all know it's not true. No matter what their, "New Way Home Treatment," was exactly, it didn't work. Today we have breast implants and that takes less than 15 days and actually does what this ad claims. That's the progress of the last 100 years! 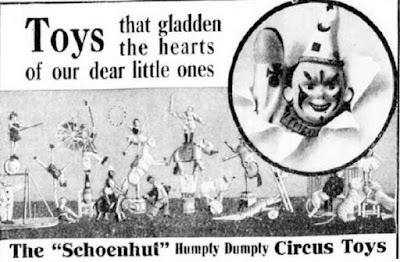 Gladden the hearts?? Or give heart attacks?? Just look at that terrifying clown! I'm not afraid of clowns...I just hate them. I will say that this has to be the most evil looking clown I've ever seen since the last time I looked at a clown. As if it wasn't bad enough, they actually focus in on this terrible monster of a clown! What stupid kid looked at this and said, "Mommy, I want this!" The only thing these circus toys will bring is terror and death. Just stare at that clown for a few minutes folks.....nightmare fuel. 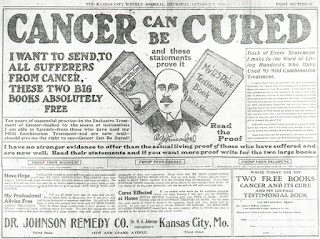 Not by you! Thanks for the free books, but unless the first page says, "Cancer can't be cured," these books are totally worthless. Unless, somehow, this guy back in 1912 DID find the cure for cancer, and instead of making money off of it and spreading the cure, he just wrote two massive books and gave them out for free, then I'd say he is full of crap. "READ THE PROOF," how bout you just give us the answer jerk, we're dying of cancer! I actually would love to read these two books, I really wonder what they say. 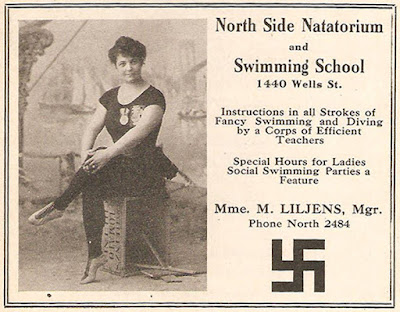 Did everybody catch that? Swimming school checks out, sounds good, nice place to go, friendly well-trained teachers, lovely lady pictured ready for swimming, and then BAM!!! NAZI SYMBOL!!! It just comes out of nowhere and is really out of place no matter what it was supposed to mean. I guess they wanted to save ink on writing out, "Your swimming instructor will be Hitler," or, "Please, No Jews." 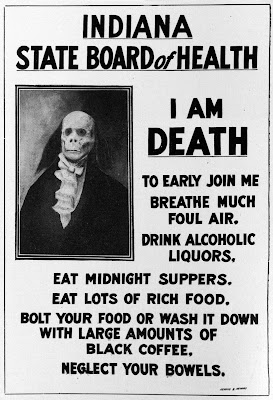 Keep in mind, if you eat at midnight, you're DEAD. I'm not sure how you neglect your bowels....but if you do, it will kill you. Drinking liquors will also kill you, that's why no one finishes college today. Let us all remember that coffee plus food equals death. Also, what the hell does, "bolt your food," mean? 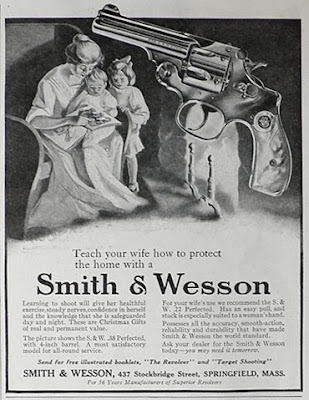 I love this one. Teach your wife to shoot people. After she tucks in Jr. and little Suzy, she's going to go load a few rounds and wait for the intruders. If you take the massive gun out of this picture, it would actually be kind of nice and heartwarming. I think it would have been more effective to show her shooting some bad guy coming through the window, while the kids cheer in the background or better yet, just sleeping all snug in the beds with big smiles on their faces because they know that mommy will blow away any one that dares to enter their home. 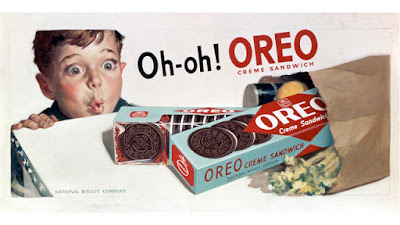 This isn't crazy, I just thought it was crazy that we've been eating Oreos for over 100 years and that they used to be called, "creme sandwiches." The best part of this ad is at the very bottom, turns out that, "Nabisco," stands for, National Biscuit Company. Did anyone else know that? 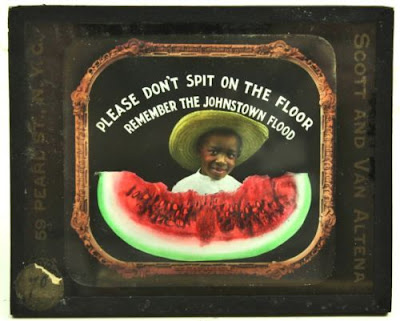 I don't even know what to make of this one. I guess we can chalk it up to being racist. I understand a request for not spitting on the floor so we can rule out this being an ad for Denny's. No clue what remembering the Johnstown flood has to do with eating watermelon? If anything, I'd say, "Well, we SHOULD spit on the floor because if a massive flood happens, it won't really make a difference, now will it??" 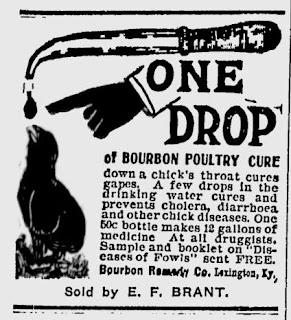 Poultry cure made by BOURBON?!?! Hey, wait a minute! I guess for 100 years we have been trying to get chicks drunk.

GET YOUR BABIES HERE! GET YOUR BABIES! STEP RIGHT UP, WIN A REAL LIVE BABY AT THE BABY RAFFLE! This isn't a half bad idea actually. It would help to get rid of some of those orphan babies and it's a lot easier than going through the adoption process. Not sure if hanging babies in bags beside a giant wheel was a good idea...I guess I'd have to see the profit margin from the raffle. Wonder if those are the actual babies you win or if they're just cute ones for show? 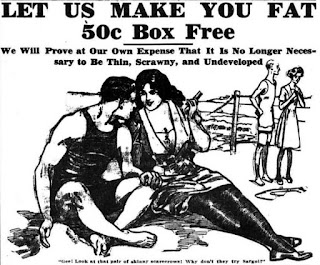 FINALLY! Something to make people fat in this country! Just what we need. I guess they did need it back in 1912 because this wasn't the only ad I found that said it would get you fat. Oh skinny people in the background getting made fun of, don't worry, although you're dead, rest easy knowing you had the laugh last.

Those are just a few crazy advertisements I found from 1912. Although some things are different, most of marketing is the exact same, promises, scare tactics, wild claims, preying on low self-esteem or ignorance. We can laugh at a lot of these but don't laugh too hard...100 years from now people will laugh at half the products you have in your home right now. 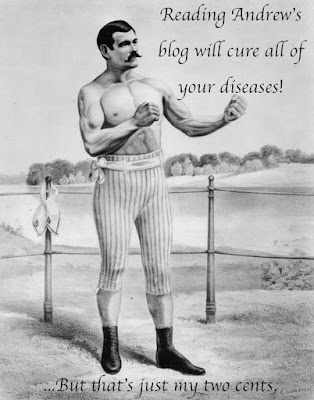