BIGFOOT THROUGHOUT HISTORY, BIGFOOT AT THE SALEM WITCH TRIALS

A newly recovered document that could possibly be the first appearance of a courtroom stenographer in America, proves that not only does Bigfoot exist, but he was also a defense lawyer for the accused people of the Salem Witch Trials! These examples are taken from those documents. 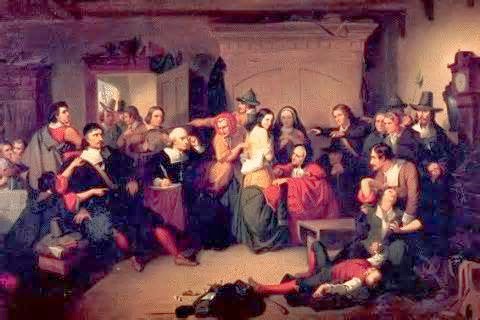 I Stephan Sewall feel it is my Christian duty to document these proceedings as they happen. 18 more have been accused of witchcraft, although they are denying it, we do not believe them. No one will defend these demons in disguise except for one lawyer, he calls himself Bigfoot. We first planned to burn him at the stake as well, due to his horrid appearance and disgusting smell. It's the kind of smell that makes you think he bathed in rotten eggs that had been sitting out in the hot summer's sun for 40 days and 40 nights and then after the bath dried himself off with a towel made out of skunk hide. He came forward and said he was a very good-looking man but the witches on trial have put a spell on us to make us believe he is ugly.

Bigfoot, Attorney At Law, as he calls himself, made an 82 minute opening statement today. In it, he proved, beyond a reasonable doubt, ten different ways, that the accused is in fact a witch. When it was pointed out that he was their DEFENSE lawyer, and not trying to condemn them, he slapped his forehead and asked that what he just said be stricken from the record. The judge said no and sentenced Giles Cory to death for practicing witchcraft.

We executed 8 more witches today after Bigfoot tampered with the evidence. Bigfoot yelled out OBJECTION but it was overruled because he was objecting to his own actions. Before each witch was  executed Bigfoot apologized to them but added they wouldn't be in this predicament if they hadn't been a witch. Each witch still lied to the very end, screaming at Bigfoot that they were not a witch. At one point Bigfoot leaned over and whispered that witches are so annoying and he can see why we want to kill so many of them.

Today Bigfoot accused the entire prosecution to be witches. They denied it but Bigfoot claimed that's exactly what a witch would say. Bigfoot started to tell us that we were out of order and that the whole court was out of order. He then called a ghost to the stand as a surprise witness. Bigfoot stated that if you could not see or hear the ghost then it meant you were a witch too. Bigfoot then pleaded to the judge on the grounds that he wants a mistrial.

Today Bigfoot claimed the only thing that should be on trail  are the stupid people of Salem for their lack of fashion sense. He argued that no one should wear buckles on their hats, shoes, and belts all at the same time. He then said it was, "so last year," and the real crime here was unimaginative style and lack of design encompassed with poor taste, all the while encouraging the drab to settle for the mundane. None of us had any idea what he was taking about. He then reminded us that in this time period the letter, "S" and the letter "F" are interchangeable, at which point he told us to go "Suck ourfelvef."

The trials have moved to the Supreme Court. That moron Bigfoot showed up on the prosecution side. He brought, "exhibit A," for the jury to see, it was a broom. Bigfoot pretended to fly as he rode it around the courtroom. He said the illusion of him flying would be flawless because he was a Seeker on the Salem Quidditch team. After that Bigfoot said he rested his case, all the accused were found not guilty and set free.