My weekend at the Chrysler Nationals was very eventful. I met a lot of great people, I saw a lot of great cars, I had a lot of fun, but most importantly my Challenger got to do what it loves most of all, sitting there getting attention.   Click on any pic to enlarge it. 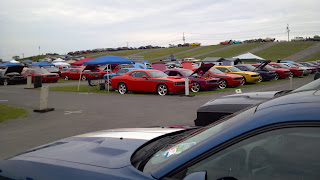 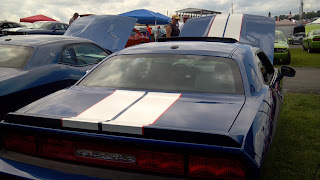 The Chrysler Nationals at Carlisle PA is one of the biggest car shows around and when it comes to MOPAR, some say it's the biggest in the country. People came from all over to go be in this show. I saw license plates from PA, New York, New Jersey, Massachusetts, Connecticut, Michigan, Illinois, Virginia, West Virginia, Rhode Island, Kentucky, Alabama, Minnesota, Maryland, Florida, Ohio, and Ontario Canada! I'm sure there were more, but those are the ones I actually remember seeing. There is so much to do and see there that one day just doesn't cut it, that's why I was there for all three days. I had my Dodge Challenger in the show so many people got to see it and they would stop and talk to you, again I met some very nice people. There are 110 Dodge Challengers in this picture, let alone the others you can't see, plus the others spread out of the other parts of the show AND not to mention that this was taken on Friday and on Saturday there were even MORE. The grass you can see and where that dude is standing was full of cars. Can you spot mine? Good luck. 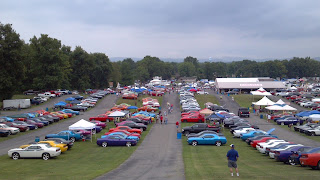 One person I met was Sonny Shroyer HIMSELF! You all will remember Sonny as Enos Strate from The Dukes of Hazzard. I've been watching that show since I can remember, and I got to tell Mr. Shroyer himself that fact. I also invited him back to my Challenger because I tried to lure him there so I could get a picture of him in my Challenger but he was too smart for me and made up some excuse of why he would just come by later! haha, he never showed up. BUT I got his autograph plus an amazing memory that will last me a life time. 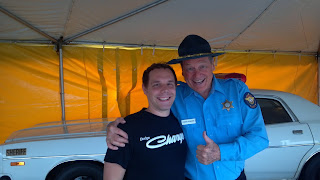 Where else can you see several General Lees in one spot?? Not too many places and a view like this is almost impossible in day to day life, but not at the Chrysler Nationals! Here it was like being in Hazzard county and I have the mullet pictures to back that up. 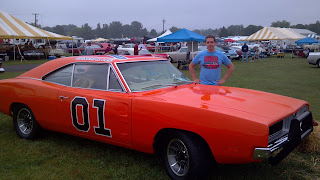 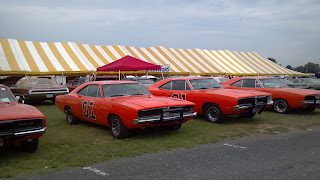 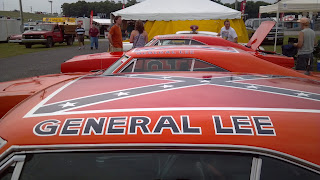 Showing my Challenger was really fun. I didn't have to win a trophy. When I saw a family come up to my car, and their young boys lined up in front of my car to have their pictures taken while giving the thumbs up accompanied by huge smiles, well I knew awards didn't matter then. I'd like to point out to the winners that THOSE KIDS chose MY CAR out of over 100 cars to take their pictures in front not one of the "winners" of the show, so you know what?? I'm the real winner aren't I? Also check out this picture, which car is this random guy taking a picture of??? Mine. I'm allowed to be partial. 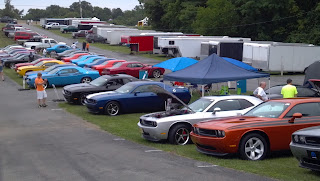 The burn out competition was really cool to watch. I just happen to have the winner right here doing his winning burn out. Believe it or not, this is his daughter's car.

There was Dyno testing if you wanted to test your car. This guy was testing out his horse power, but something tells me he already knew exactly what he was making...I just think he wanted everyone else to know too!

Notice the HIS and HER license plates. These cars are owned by a very nice Canadian couple. They actually both bought the same car and then were annoyed when they kept running into each other at car shows. Eventually they got to know each other and like each other and one day fell in love. They are now married and travel from car show to car show! They were very nice people and coming from Ontario had a very long drive. When I asked whose car had more HorsePower the wife quickly responded with ME, I DO! 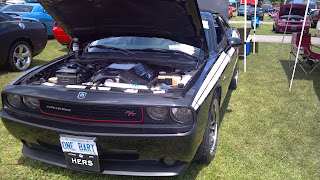 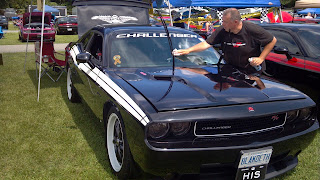 New Challengers weren't the only thing Carlisle had to offer though. As you can see there was a huge assortment of everything MOPAR, including Jeeps. Check out this 1973 Dodge Charger, who on earth would buy a Charger that color??? Well this guy and me apparently! 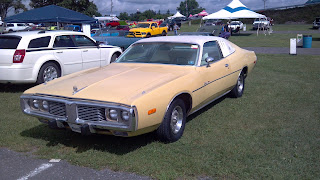 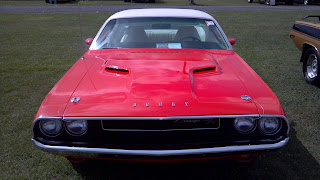 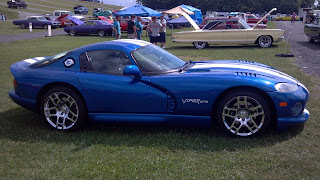 Look who is crowning the Daisy Duke contest winner! Who else would know Daisy better than Enos himself??? No matter who won this contest, they can still consider it second place because Catherine Bach will always be number one. 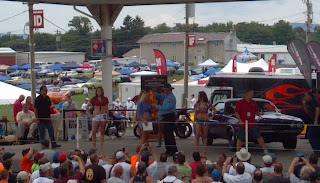 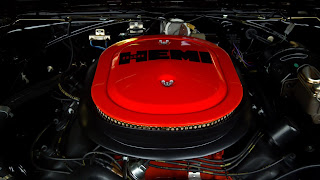 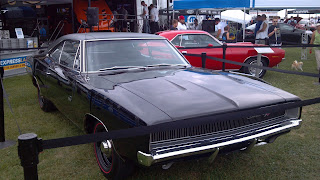 Although it did rain and we had some very dark clouds it was still a wonderful weekend. If you're a die hard Mopar fan you HAVE to get to Carlisle, you won't be disappointed. I had a great time and I will be back next year. I only hope to some day drive through those gates in my 1974 Dodge Charger. Until then, I'll keep coming back with my Challenger.

I agree. Just the thought of those people wanting to take a picture of you and your car can make you feel like a winner. And they really can't help it, since your car looks really awesome. As long as they don't do anything that might damage your car, I say let them! Cheers!