First steps of the restoration

Saturday I woke up and took the first REAL steps in restoring the Charger. First things first as I cleaned the seats and carpet. Cleaning the carpet, almost pointless considering I planned on ripping the entire carpet out that day. The carpet itself was torn and rotted in many places and I was able to see several rust holes in the floor so removing it was a necessary step.
You first have to remove the seats, not as difficult as other things but the bolts that hold the seats in the car are underneath the vehicle itself. After some WD40 loosened the bolts we were able to remove the front seat with ease! The seat belts on the other hand..... 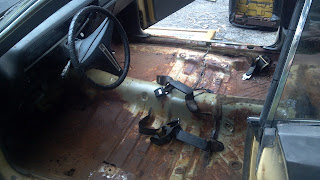 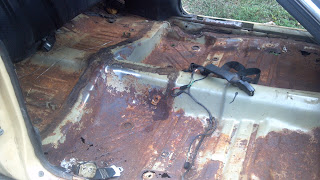 I suppose the seat belts being bolted to the floor is a good thing when it comes to safety, but as for removing them, holy crap was that hard! We actually removed the carpet first, cutting around the seat belts. The bare floor revealed what I had feared, rust holes and very thin metal due to rusting. Not as many holes as there could be, it's going to be an easy fix, one that I plan to do myself instead of paying a guy to do it for me. The paint was flaking in some places and you could see the bare metal, it wasn't rusted at all, it shined like the day it was painted all those years ago in Detroit Michigan. Under the back seat we found several pennies, two combs, a pen, and a lot of dirt. We cleaned off all the loose dust, dirt, and rust. The floor was actually in good condition considering it's age, it has been sitting outside for 10 years, and it spent it's life before that in Vermont. All things considered, I was pretty lucky! We went to see a body man that is supposedly pretty good, he is coming to the house to see the Charger this week. 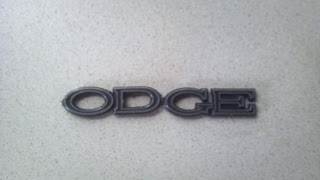 I also found a "Dodge" emblem, from what I can tell it goes on the dashboard above the glove compartment. It was inside the front seat and I don't know where the D is, because we took that interior carpet to the bare metal.

Now I will wait to see what the body man says, I'm nervous about what he will say about the estimated cost, I expect it to be in the thousands and I'm ok with that, I just don't want to hear that it is too big of a job for him to do, because I've heard that from others in the past.
Posted by Andrew at 7/14/2012 10:24:00 PM