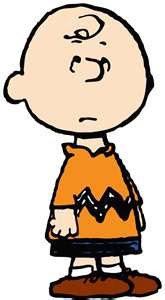 We all know and love the Peanuts characters, but here are some little known facts about the timeless comic strip...

The piano song that everybody recognizes as the peanuts theme is actually titled, "Linus and Lucy" but less well known is that song's original title was, " The Hooray Hitler is Dead Rag"

Snoopy is a beagle and beagles are not white and black but Charles M. Schulz was color blind and honestly thought all beagles were only black and white.

Charles M. Schulz did name Charlie Brown after himself, he also named the character Pigface after his wife. To avoid suspicion, he changed the name to Pigpen.

Lucy was arrested for unlawfully giving out psychiatric advice without a license. She was also sued for malpractice.

Schroeder actually could play the piano, however years of his hunched over approach to playing left him with a horrible case of scoliosis, one he never recovered from and left him paralyzed for life...he did write a song about it though.

Charlie Brown's teacher always sounded like a muted trumpet. The reason for this is because Charles M. Schulz had an elementary teacher who had a stroke, he always found new and inventive ways to make fun of her but never as good as the joke he put in every Peanut cartoon about her disability.

Charles M. Schulz, being a homosexual himself, decided to make the first gay cartoon character. Even before Velma from Scooby Doo, and way before Snaggle Puss, we had Peppermint Patty and Marcie.

Lucy was named after a highschool sweetheart of Charles M. Schulz. The editor of the peanuts comic strip forced Charles to change the spelling of her name because he refused to allow the original, "Loosey" into the news papers.

Charles M. Schulz believed in the Great Pumpkin himself, since he was a pagan. Unknown and unmentioned in other movies, Charles also worshiped, in addition to the Great Pumpkin, The Holy Potato, The Wonderful Watermelon, The Magical Mango, The Amazing Asparagus, The Uncanny Kumquat and Dr. Pepper.

It's a well known fact that Charles M Schulz hated cancer patients. To make fun of them on a weekly basis he made Charlie Brown bald.

Gary Glitter's song "Rock and Roll part 2" was a sequel and is better known around sporting events as the popular, "Hey!" song. Gary Glitter followed it up with another sequel known as the, "What?!?!" song.