BLAST FROM THE PAST: The Voyage of the Mimi 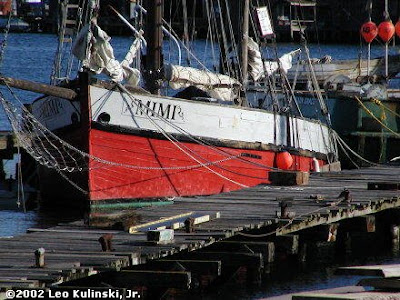 Captain Granville and 6 other members used his ship, including his grandson C.T. The show was pretty good, it was only 13 episodes long and each week was another part of their long adventure at sea. It was a show for middle schoolers to learn about science and math in a fun and interesting way. It is still being shown in some schools today because the lessons learned back then can still be applied today. It taught young people a lot, i hadn't seen it since i was 6 years old and i don't remember much, other than i LOVED the theme song.

Way before Ben Affleck was ruining movies in the late 90's and 2000's he was playing C.T. Granville, the 10 year old of the crew who sailed the seas looking for whales and relating to kids everywhere. When Ben Affleck started doing movies many people my age and older said, "That's C.T.!" (As a side note, Ben Affleck's acting abilities are about the same in 2009 as they were in 1984.)

The ship was really owned by the man who played Captain Granville, and it was built in 1933 as a whaling vessel. He owned the ship until 1999 when he sold it. The ship is still sea worthy and docked in Boston. I would really like to see it someday.

With the help of the internet it took me 16 years to figure out the name of this show. 18 years to hear the theme song again, which was one of my favorites of all time. And 20 years to finally see the only episode i remembered. The one thing i NEVER forgot was that you CAN make salt water drinkable, this tv show showed you how. Its worth checking out, the acting is just horrible but if you watched it as a kid you liked it, it has a special allure for some reason. The theme music, which you can find here, http://www.youtube.com/watch?v=uYrlarKM-gw is worth listening to at least once. Youtube has many clips and a few episodes from the series. I hope more will be on the way but that's just my two cents.
Posted by Andrew at 5/22/2009 12:27:00 PM