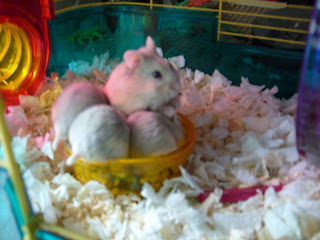 Princess, one of my many dwarf hamsters is slowly dying. Old age will do that to a hamster, they all have short life spans anyhow. Having 17 at one time, I am now down to just 2.

Seen here, Princess with 3 of her babies, one of them being the only one to have ever escaped. (he was later caught)

Princess has had 16 babies total, that weren't eaten or died. She was the first of my opal gene created by her father Jester and mother Queen. She had my first albino baby, Angel Eyes and then later with him had a litter of 3 albino babies. She is also one of my oldest living hamsters and one of two left from my entire line, Angel Eyes being the other.

Losing a hamster isn't what bothers me, I've lost a ton, they don't live long its just how it goes. But she is one that i created, all of my hamsters were bred from a single pair and I added Queen because the gene pool was getting thin. Once she dies ill be down to one, I've never been down to one since i started this whole hamster breeding thing. Angel Eyes, my albino male, her son will be the last of my dwarf hamsters. Part of me would like to see a hamsterless room, no more buying the food or bedding or cleaning the cages or worrying about the smell. Yet...after generation after generation of hamsters being bred to just end all of a sudden is hard to face. Part of me hates the idea of all of my work coming to an end. Angel Eyes, (named after a character from the good the bad and the ugly, also due to his bright red eyes) is so old that I'm not even sure if he can produce any children so even if i get another female it may be for nothing.

Five generations could end very soon or I could keep it going. I have always wanted to work with a solid black dwarf hamster and the mottled are pretty cool looking. Continuing it or ending it, either way Princess played a major part in my breedings. She was a good breeder, a good producer and a good hamster. She is going to be missed.