The kids in my church are putting on, "Moses, the Musical" and who better to make that famous idol, the false God, Golden Calf than me? Of course I accepted the prop challenge without anyone actually challenging me or even asking me to do it. The problem was I only had 4 days to do whatever it was I was going to do. 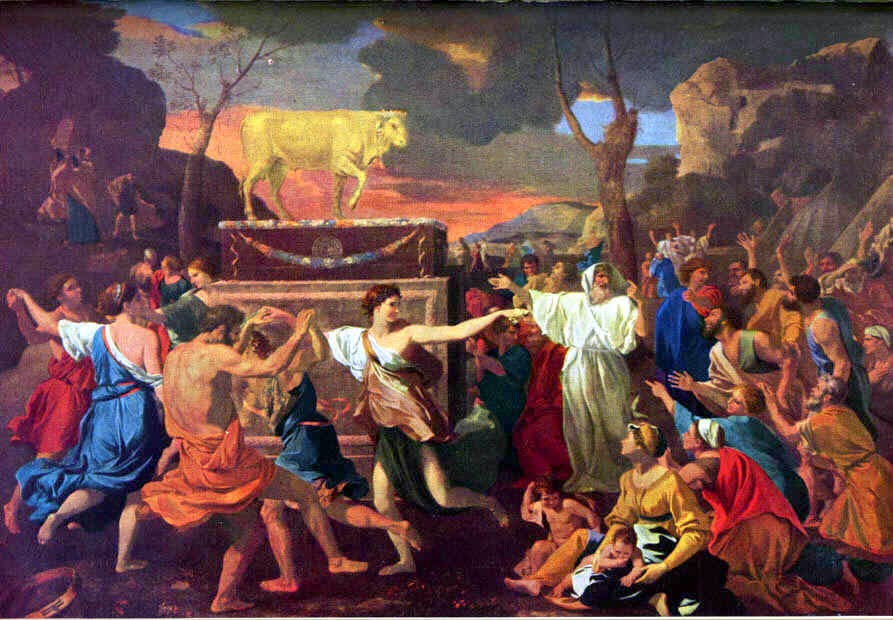 My first idea was to make it out of aluminum foil and spray paint it gold but I was told that would be too expensive. Not sure how cheap the people around me really were, I decided to go bigger and better than foil. Then it hit me, paper mache! I had only used it twice in my life but was pretty sure I was an expert on the subject. With this I could make it huge and then spray paint it gold. 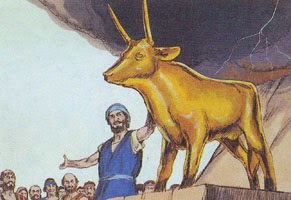 I first decided to make the Calf in a lying down position, not because it was easier to do without the legs, but because this is how I always pictured it. As you know, the Golden Calf was the idol that the Jews made while Moses was gone getting the first set of Ten Commandments, when he came back down the mountain he found everyone had melted their gold to make a Golden Calf, they were dancing around worshiping it and I don't have to tell you how angry this made Moses! In our production we would need a prop that was over the top. The first idea that they came up with was to just draw in on a piece of paper....I knew I could beat that idea. 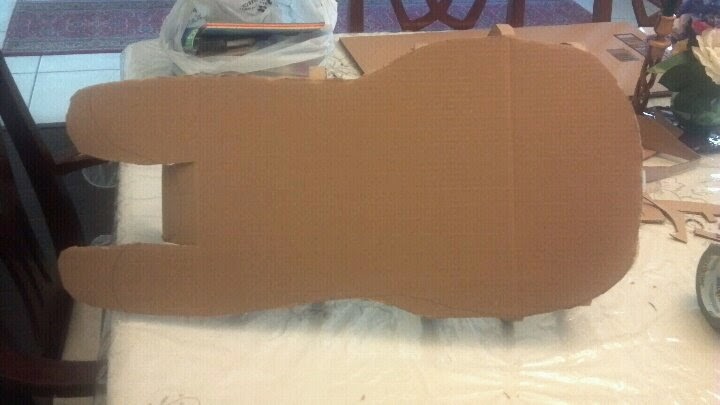 As you can see, I first cut out the shape of a lying down cow from the bottom. I then started to construct its spinal cord and ribs. I would attach the paper mache to these ribs to create the body. I started to work on the neck and wasn't sure how I'd get the head on. 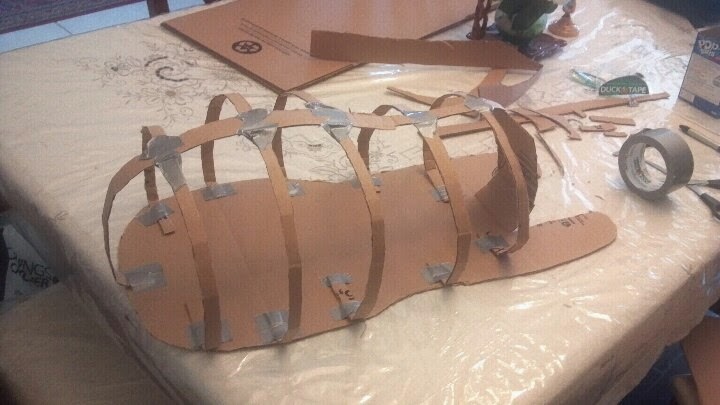 Luckily I knew cow bodies inside and out. I used duct tape and it didn't really stick to the cardboard like I thought it should have. It kept coming up and peeling off. Not sure if there is a better tape for this sort of thing but I stuck with the duct tape, even if it didn't stick to my project. 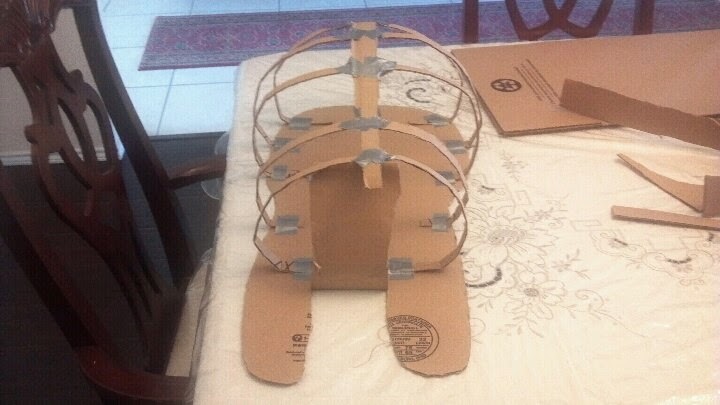 I started to make the head separately. 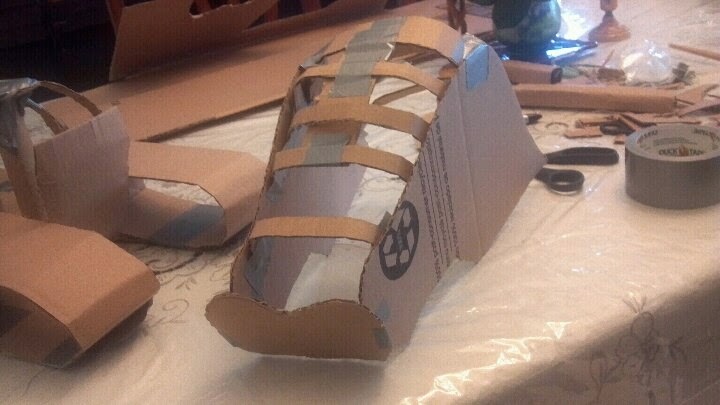 The head itself was pretty tricky. It had to be the shape of a cow's head and since I was using cardboard that is naturally flat I had to improvise and create some more depth. The head turned out to be pretty heavy so I had to reinforce the neck and front shoulders. I used a coat hanger for the horns because they were the perfect shape for horns, once covered in layers of paper mache no one would ever know anyway. 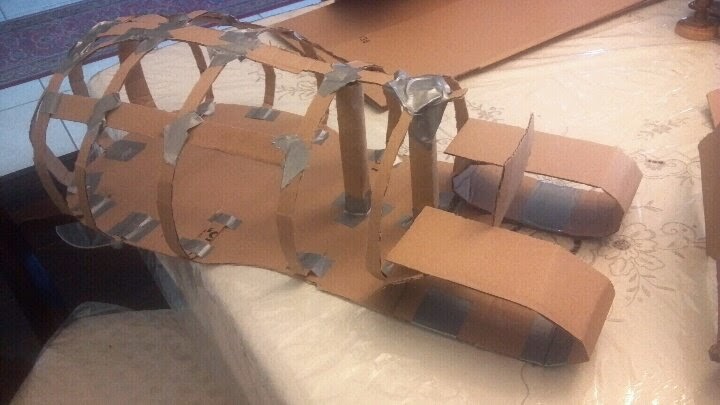 The calf was now complete and ready for the paper mache but I would soon learn a lesson in my choice of material. 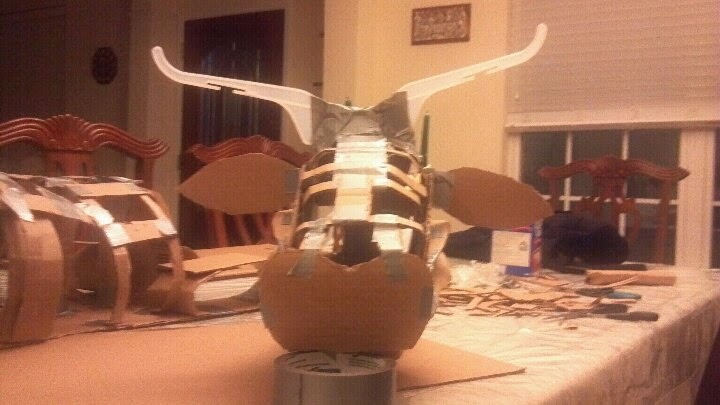 Paper mache is easy enough to make. I'd like to point out how UNHELPFUL Wal-Mart was by the way. Not only did they have NO paper mache material, I thought there should be a mix or something and when they didn't I figured I'd go the glue method but they told me they were OUT of white glue. Yes, out of normal, everyday, Elmers, over the counter, white glue. Really? Out of glue? For a second I felt like the dad from A Christmas Story. 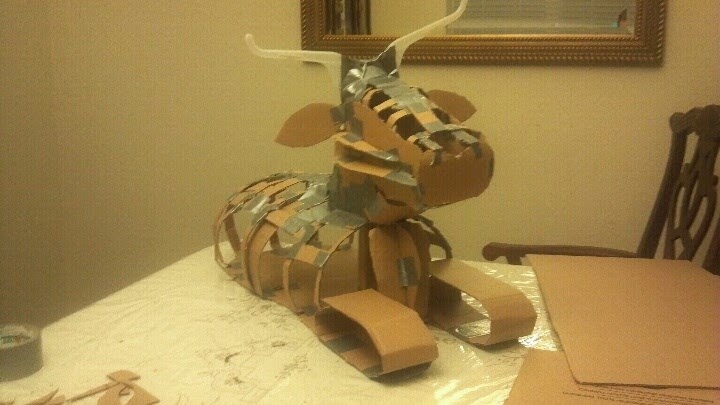 Luckily paper mache can be made out of simply adding water to flour and with a pinch of salt. This is how I made mine and I have to say, it really works great. Very messy and annoying to use but it did exactly what I wanted it to do so I can't complain, besides you can't beat the price to make it. I cut up old newspaper into strips and then dipped the strips, wiped off the excess flour goop, and started to make layers on the cardboard skeleton. At this point all I had spent on this whole project was the .68 cents that bought the cardboard. Flour, water, and old newspaper were all free. 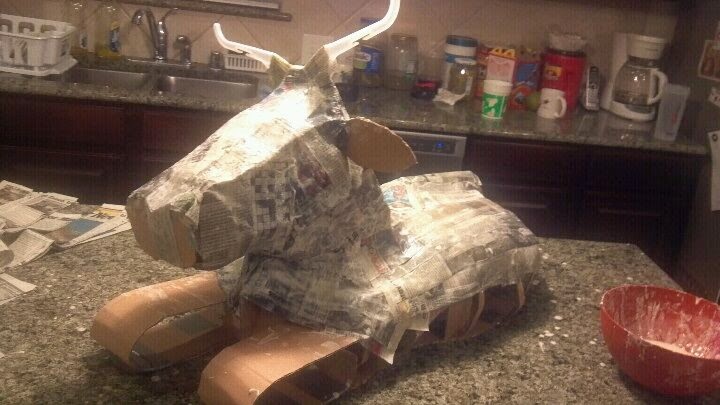 The paper mache went on perfectly and I was really happy and excited with the early results. I thought I would leave the calf in the garage over night because it was the hottest place in the house and I knew that would make it dry faster. On the contrary. The paper mache being wet started to soak into the cardboard and the humid ridiculously hot garage made a soggy bovine skeleton that collapsed under the weight of the wet newspaper. You can see in the above picture how much further down the head and neck sunk compared to before it ever had paper mache on it. 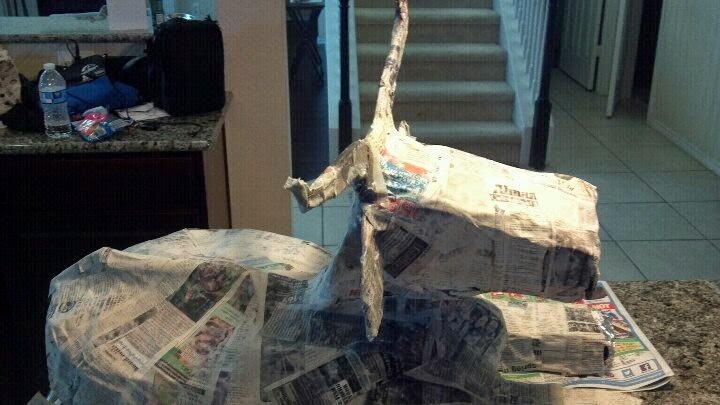 Feeling really dejected I tried to think all day of how to get my calf back to where it needed to be as far as shape was concerned. The problem was, while I was at work the wet paper dried even more and when I got home he was almost all dried, keeping his form all condensed and collapsed. I got balloons and blew them up inside his body, this raised  him up again and I was able to start adding more paper mache. This time I left him out of the garage.

I was running out of time at this point. He was needed by Thursday and here it was Tuesday night. Wednesday night I finished putting on the paper mache and I have to say I was not happy with how it looked at this point. I needed much more time to do a much better job. It could have been MUCH smoother and I could have put in more features and detail but the fact was I had no more time and I needed to add the paint. 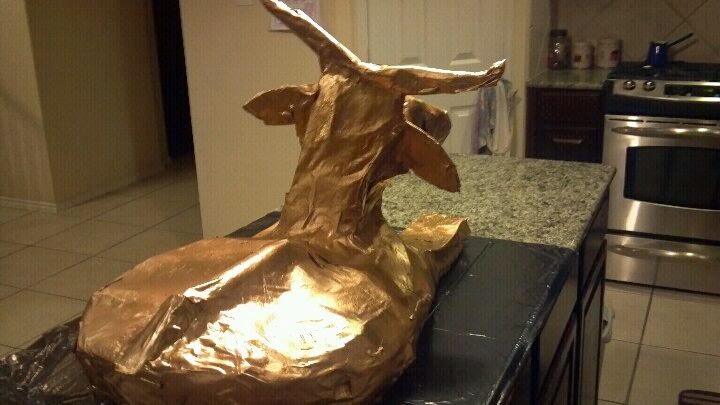 I got the metallic gold spray paint that was supposed to look like real gold when it was dry. I do have to say I loved this paint, it worked like a charm and the Golden Calf was in all his glory. Being rushed on the paper mache layers did result in some minor imperfections that you can see up close. Little bumps and grooves and areas where the newspaper lifted up can be seen and would have been corrected if I had more time or had started out with a better cow skeleton instead of cardboard. At a distance however, it looks pretty amazing. 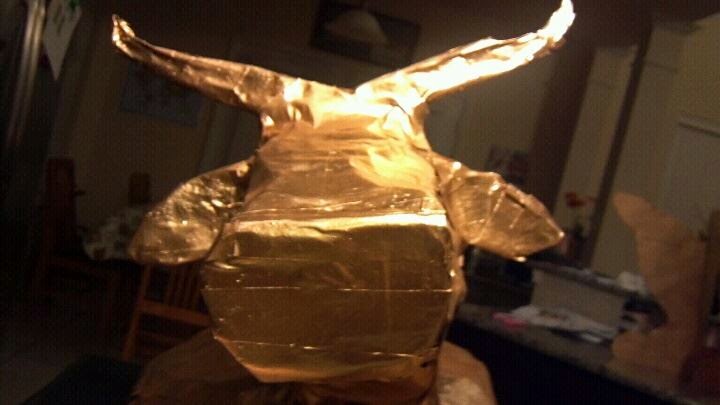 As you can see the Golden Calf is ready for his mystical journey and his scene in Moses the Musical. I can't wait to see him on stage with the heathen Jews dancing around him. 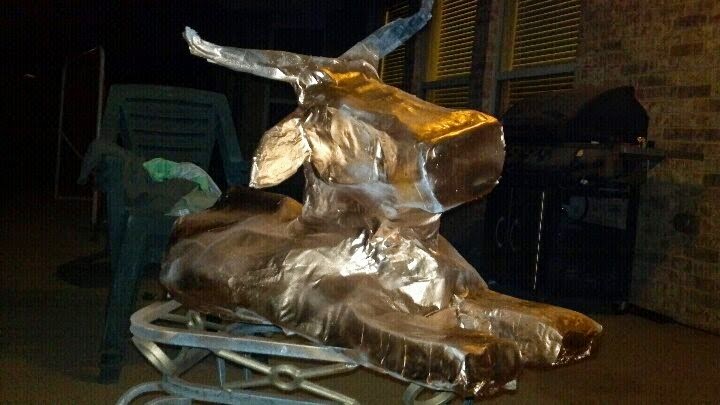 I had a lot of fun making this project even if it wasn't as good as I would have liked. Time restraints and learning curves took their toll in the end. Next time I would like more time and to make a much more sturdy cow infrastructure with reinforced cardboard I-beams. Or even wood. Either way it was fun to make and I hope the kids like it and don't smash it because as I see it, this calf is worth it's weight in gold! 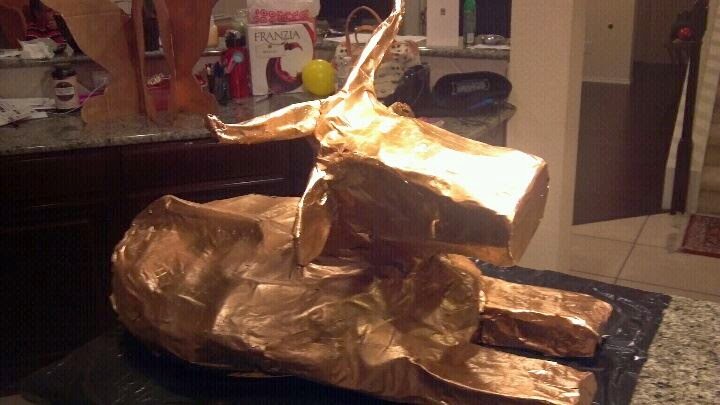