ORCHIDS, WHY THEY AREN'T HARD TO GROW

Orchids, probably the strangest looking flowers out there. Their appearance is almost fake because they are so unique. When people talk about keeping orchids one of the most common things you will hear is, "they are SO hard to take care of!" Well that simply isn't true as I have found out for myself, that is, as long as you do a few very simple things to keep them happy. An orchid needs very specific conditions, if you provide those, taking care of these beautiful little guys is easy and rewarding. And as always, a plant will tell you exactly what it needs...you just have to know how to listen. Let me start with my personal history of the orchid flower. If you want to skip all this crap just scroll down until you find, "orchid care." The first time I saw an orchid for sale in a store it was years ago but I remember how I felt when seeing one for the first time. I actually laughed and snickered and thought, "what kind of a moron would buy such a stupid looking fake flower???" I honestly thought it was a plastic fake decoration. I had no idea that it was an actual living plant, I thought someone had made it for show. That's how amazing they are though, they don't even look real. Their colors and simplicity make the orchid, (the phalaenopsis orchids to be exact) an extraordinary flowering plant to display. All I ever heard was, "stay away from them, they are so hard to grow." I never bothered with them and for years I knew nothing about them.

FAST FORWARD TO TWO YEARS AGO: My older sister gets a phalaenopsis orchid for my mother, I think it was Mother's Day? My mother has no green thumb by any means, in fact I joke with her that she has a black hand due to all the plant deaths she's caused over the years. My first reaction to the gift was, what a bone-head present this will turn out to be, one of the most difficult plants to have and a woman that kills some of the easiest plants to take care of, a match made it heaven! I did find the orchid to be extremely beautiful but again, no surprises there. It didn't matter because in my mind after a few days of looking spectacular the flowers would droop, wilt and fall off, and then it was only a matter of time before the leaves began to shrivel and turn brown, dry up and fall off leaving a long dead dried stick in the pot where a marvelous flower once stood. I was wrong and my assumption couldn't have been further from the truth. To my delight AND shock this orchid bloomed for months and is still alive to this very day. I was also very surprised and intrigued about the watering method, placing ice cubes in the pot. (I will discuss this in the care section) I was determined to  not let my mother kill this flower, I reminded her of the "watering" and always found it had already been taken care of by my mother. It's hard to NOT kill these plants with kindness as is the most often cause of death by orchid owners. As I stated before my mother's orchid plant lived through the winter, flowerless, but we all believed that it would re-bloom when the time was right and sure enough, it did. 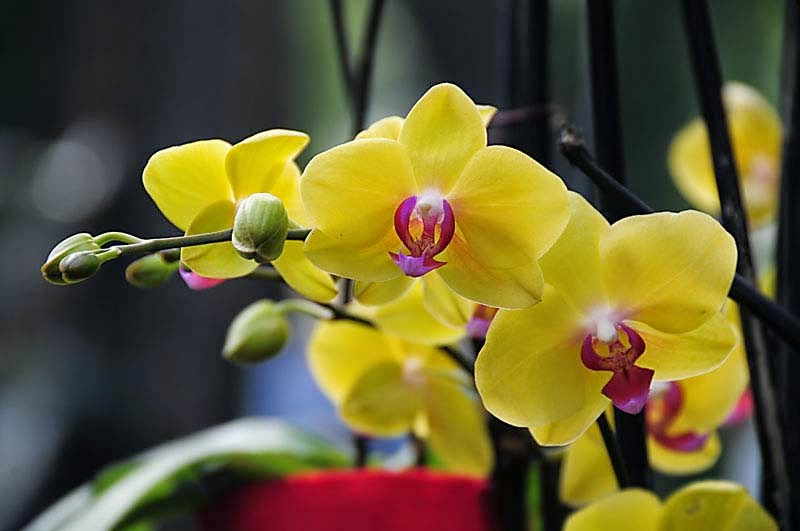 Fast forward to the present. So I was in the grocery store and there were a ton of flower bouquets in there and on a small table there sat, by itself, a lonely orchid. It said, "manager's special" on the side and marked down to $3.99. That's ridiculously cheap for an orchid flower. I didn't know what was wrong with it, in fact, it didn't seem to be that bad off to me, I assumed it had to do with watering or should I say, lack there of, to be a likely reason for it getting the manager's special tag. I bought it and headed home to find out just what was the matter. I did ton of research and there are a lot of great YouTube channels and websites that helped me learn a great deal. Turns out there are a lot of different kinds of orchid flowers but the one that you probably recognize is the phalaenopsis. I think these are the best, I like them the most anyway. They require some very specific things to grow and last for years. They bloom and the flowers can last several months and they can bloom several times a year.

I now hunt down these, "manager's specials," in stores saving these dying ones that actually just need some TLC and the proper conditions. The problem with selling orchids is that to ship them and keep them alive in stores looking beautiful means doing things to them that you should never do when you are keeping them in your home. THAT is why people say they are hard to grow and keep alive. When you buy them from the store they are already in need of some help but people don't know this or understand it. So they have the flower for a short time, it starts to wilt and die and they are scratching their heads saying, "why did that happen, I guess they are just hard to care for!" Well they aren't and I will share some tips and tricks with you to help not only keep your orchid alive but keep it thriving for years!

ORCHID CARE:  Phalaenopsis Ochids to be specific. First things first. It is important to note that these orchids love moisture BUT not being damp, wet, soaking, or sitting in water. That is the reason why the moss medium is a terrible idea, sure it's great to keep moisture in BUT it does harm by keeping the roots very damp. Plus orchid roots need air, they like air around them, in the wild they literally cling to trees and never use dirt. Planting in moss really restricts the air flow around roots. I think this is why the ice cube method works well, because it is a very small amount of water, just enough to keep the plant alive but not enough saturation to kill them. Freezing cold water is something that I do not recommend, that's why I'm against the ice cube method. (My mother used this and still uses this for the orchid she has had for over a year. It has bloomed 3 different times in the past year using ice cubes to water.)

PLANTING: Well you should wait until the plant is done blooming before you do this, that is tough considering if it is in moss you SHOULD replant it. Just wait as the stress on a re-potting could be too much. I find the bark medium a much safer way to plant your orchid. They sell it in almost all stores that carry plants, Lowes, Home Depot, Wal-Mart, and so on. Orchid roots like to be tight and constricted, unlike most other plants so don't feel they need a huge container when replanting them. The roots should be green and if they are a silvery-grey, they want some water. You can actually see them change color when you water. Some roots may be sticking up or growing out of the pot, this is ok, they are air roots and you shouldn't try to cram them down into the pot, just let them grow. Misting them helps to make a happy orchid.

WATERING: Seems like this is the most debated thing when discussing orchids. Some say the ice cube method is the way to go. Others say tap water works great as long as it's tepid. I've heard running water is what you should do. Some suggest letting it sit in water for a few minutes then make sure it drains well. So what is the right way to do it? I honestly can't say. I do know that the bark dries out very fast and you're going to have to keep an eye on your plant. I run water through mine and this seems to be working so far. Like I said before, orchids like to have moisture but not be wet. Make sure you have a well draining container. Misting helps as well or even a shallow dish of water underneath because orchids love humidity.

Watering too much can cause droopy leaves and ultimately death. I will say less is more when it comes to watering but not nearly as much as a cactus or succulent and I have learned that watering these guys more often than once a week has been needed and welcomed by the plants. Watering slightly more during blooming will probably be needed.

SUNLIGHT:  Plants need sunlight, did you know that? Most first-graders do so I sure hope this wasn't a shock to you. What you might not know is that the phalaenopsis orchid likes filtered sunlight and never direct. Keep in mind, these guys come from growing on and under trees, they would naturally have less light getting to them. Leaves should be olive green and perky, standing up is an indication of good watering. A dark green leaf means not enough light. Red or brown spots or edges can mean too much sunlight as they will burn if they get too much. A shear curtain in front of your window does great to give the orchid just enough light but not burn it. An east facing window also works best.

BLOOMING: Your orchid will bloom because it is a flower and that's what it does. It may take a while if it has no flowers but a healthy plant should bloom about twice a year, sometimes more. The flowers should last a few months as well. Keep in mind that when your flower starts to bloom, don't change its direction! It will try to bend towards the light if you move it. When shopping for an orchid try to get one that is just starting to bloom or sending out some buds, this way you'll get to see the flowers bloom for yourself and you know it is just beginning its flower cycle. A flower fully bloomed may be near the end of the cycle and you'll never know but if you start to see flowers falling off a week later you might not see anymore for a year, and that can be disappointing and disheartening but remember, your flower is NOT dead at this point! It is still a plant and still needs to be taken care of just the same.

I hope this helped but remember there is so much more to know about the world of orchids. I suggest consulting Youtube or other webpages about phalaenopsis orchids once you get one, there is so much more information you'll eventually need. They are great little flowers and in my opinion, can't be matched in beauty.