Blast from the Past: THE MYSTERIOUS CITIES OF GOLD

Back when i was 4 years old i watched a cartoon on Nickelodeon. This was and has been one of my all time favorite shows. It was a Japanese/French cartoon that was dubbed in English for American tv. There were only 39 episodes but each one continued the story from the episode before. The music was also outstanding, which i feel had a lot to do with the shows popularity. 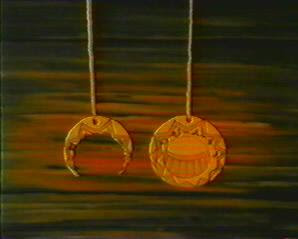 th century with two friends in search of El Dorado, the city of gold. There are many people trying to find the city also and the kids have to deal with trouble the entire time. It was a great mix of scifi, history, and anime, very unique even by today's standards. Ill review what i remember and what i loved about this show and take you through each character.

Estaban is the main characters. He was saved from a sinking ship by Mendoza, a sailor who meets up with him much later in life. In the first episode Estaban's care taker, a priest, dies, leaving Estaban alone in the world. Its at this point where Mendoza shows up and says he will take him to the Americas in search of his real father. Estaban is very brave but is deathly afraid of heights due to the fact that unlike anybody else ever in Spain, he can make the sun come out. Sailors would tie him to their masts and hoist him up to bring out the sun for a good voyage. Estaban doesn't believe he can make the sun come out but as time goes by he realizes that he indeed can, this comes in handy many times. (you'll learn why) On the ship he meets a yo 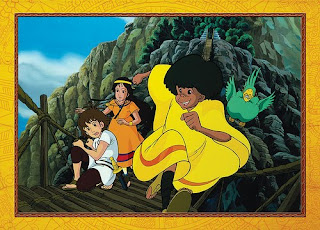 ung girl who is a prisoner named, Zia.

Zia is an incan girl who was kidnapped by Mendoza and the Spaniards. They find that they both wear matching madallions, only Estaban's is in a cresent moon shape and Zia's is a full circle. Turns out Mendoza has the inner part of the madallion and has kept it since he saved Estaban as a baby. Mendoza knows that these two madallions are supposed keys for the cities of gold. He also believes that Zia knows the way to the cities, although she doesn't. Zia is known as a child of the sun, Estaban being the only other one.

Mendoza is the bad guy/ good guy. What is he? Its hard to say, everything he does is for greed and for gold, yet he does care for the children and it becomes apparent as the show goes on. Yet we never really know his true feelings. He is a Spanish navigator, trained by Magellian himself. He is trying to get to the cities of gold for pure greed, he tricks Estaban and Zia by telling them what they want to hear, that he will take Zia home and he will find Estaban's father. He is very brave and never afraid to fight. He helps the children through out the series and often is seperated from them. 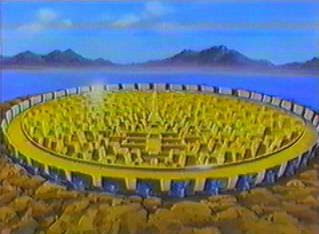 Tao is the third child of the show. He kidnaps Zia from the beach because he believes she is part of his destiny, as the prophecy says anyhow. He is the last of an anciet civilization of Heva, the people who built the cities of gold and were very advanced as far as technology goes. Tao has a great ship called the Solaris. It is soloar powered and is faster than any Spanish ship that chases it. It can also shoot a heat lazer from the mast when it gathers the sun's energy. Tao is very proud and sometimes smug when it comes to his smarts. Tao goes with Estaban and Zia because he believes that he should be in the city that his ancestors built. Tao carries with him an encyclapedia of his people that has the answers to almost everything the kids need help with. Tao has a parrot named Kokapetl.

Kokapetl is a little green parrot that loves Tao and always repeats words. He alerts the kids of danger by flying ahead and keeping a look out. He is also afraid of Patu, Zia's pet condor that flys by from time to time when they get to South America. I've always wanted a little talking bird like Kokapetl since i saw the show.

Sancho and Pedro are Mendoza's hired sailors. Both are for comic relief and i really liked them as a kid. Pedro is tall and looks like a monkey. Sancho is a fat little guy who stutters. Both are very greedy and will do anything for gold, or the thought of gold. As the show goes on they do get a little more brave and do care for the children as well but their quest for gold never ends. I learned from these two that there is water in cactuses and if youre in the desert you can cut one open and drink from it. Very good lession for a 4 year old to learn!

Golden Condor is a flying machine built by Tao's people. It is found in a temple and amazingly it is solid gold. Sancho and Pedro find that it is some type of vehicle when they are in the cockpit trying to steal jewels. Turns out Zia's and Estaban's gold madallions work as the key. This was a major part of the show, the golden condor really represented the show. I always thought it was cool how the stick in it was a snake. (that scared Sancho and Pedro when they first saw it) With the flying condor they are able to get to many places. The condor cant fly at night however and needs the sun to operate. This is why Estaban's ability to bring out the sun is very important. Estaban also loses his fear of heights after flying in the golden condor.

The Spaniards follow close behind always trying to catch Zia and Estaban in hopes they will lead them to the cities of gold. They do catch them many times but there are many escapes. They are constantly trying though and never give up. They arent the only bad guys on the show, there are many indian tribes and people along the way who add to the adventures of the children.

I loved this show but it hasnt been on tv since about 1990, maybe even 89. For years it was lost and when the internet became very popular i decided to search for this show, not knowing much about it at the time. I thought the show was called the Seven Cities of Gold and back then search engines weren't as good as they are today so i never found anything. Then on September 11th i found a site all about the show. I was so excited and surprised to learn that the name was the Mysterious Cities of Gold. At that point a man who worked at the Penn State computer lab came in and told us terrorists had hijacked planes and crashed them into the world trade towers. I sat there and continued to look at the website i found instead, thats how much i loved this show.

I won't tell you how it ends but even when i forgot just about everything i never forgot the last episode. At the end of each episode it gives a preview of what will happen in the next episode and then it gives live footage of something that the show delt with. It shows Incan temples, Mayan Temples, anciet cities, places and people of south america, and much more. It was a very educational show and there is nothing like it on tv today, which is a shame. I loved this show and still do, if i could find it on DVD i would buy it without thinking but thats just my two cents.

For a ton more info, visit Sailor Heva's Mysterious Cities of Gold page. This site is GREAT and has many pictures, audio clips and music from the show!
Posted by Andrew at 10/09/2009 02:43:00 PM